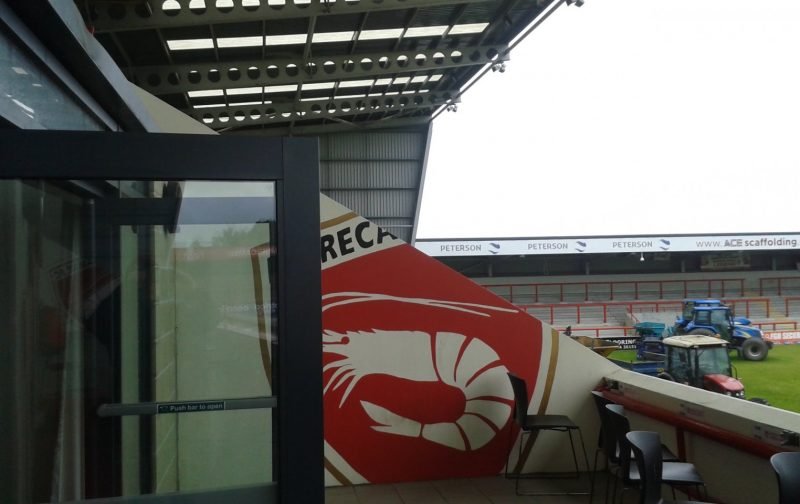 t’s always a balancing act, creating a new squad over the summer. On the plus side, there are new signings. On the other, there are the ones who got away. For me, these definitely included Liam Mandeville who – released by parent club Doncaster at the end of his on-loan stint with the Shrimps – chose to sign for non-League Chesterfield rather than for Jim Bentley, who had offered him a two-year deal. Although a lot of Shrimps’ fans never rated him, I was also sorry to see Vadaine Oliver leave: this was tremendous target man whose potential – due to injury and lack of support players up-front – was never properly utilised in my opinion. Good luck to the lad at new club Northampton (where, very tellingly, he scored a hat-trick in his very first appearance.) But the most disappointing loss in my view was that of Aaron Collins. Our Manager gave this man a chance to rebuild his career, which had completely stalled after he was released by Wolves earlier this year. He seized it with both hands and was probably the key reason the Shrimps finally stayed in League Two with a bit to spare at the end of the day. I could see Collins being the next Tom Barkhuizen: helping to consolidate our position in the EFL again until he was inevitably sold to a bigger club. But at least we would have some monetary compensation to show for it. Instead, he has gone elsewhere – to Forest Green Rovers, where he will be on a bigger pay-packet and also be closer to home in South Wales – and we have nothing to show for it but memories and thoughts of what might have been. Zak Mills – who had one pretty good season with us – has also gone (to Oldham Athletic) and Port Vale have signed promising Carlisle loanee Ritchie Bennett: he will be missed as well.

As soon as the dust had settled after the loanees and players who were not offered new contracts had been dealt with, the bare bones of the squad was as follows:

Since then, Aaron Wildig has accepted a new twelve-month deal. On his day – and, crucially, injury-free – this man was probably the most gifted footballer in Morecambe ranks last season. Veterans Barry Roche and Kevin Ellison have also been signed-up for a further season at least. Jordan Cranston, Luke Conlan, Mark Halstead and A-Jay Leitch-Smith have agreed to set pen to paper as well on new two-year deals. A renewal of Alex Kenyon’s contract took longer to negotiate than might have been the case. Lancaster City’s youngest-ever Skipper is a man who wears his heart on his sleeve and is obviously a born leader. His commitment to the club – as Captain occasionally and as stand-in goalkeeper: at Hartlepool a few years ago and, brilliantly, against Northampton last year when Barry Roche had been sent off – cannot be questioned. So let’s all hope – fitter, leaner and injury-free – that he fulfils at least a fraction of the tremendous promise he has always undoubtedly possessed during the season to come.

As far as the New Boys are concerned, Morecambe’s first signing of the closed season was a forward in the shape of Michael Howard. No – not the ex-Tory leader `with something of the night’ about him: this young man is 19 and he has been released by Preston North End.

Three players who have worn Shrimps shirts in the past have also returned to the fold. Twenty-five year old Cole Stockton – who the Manager has been trying to sign permanently ever since his loan spell at the club from Tranmere Rovers – has also signed-on for twelve months as a Morecambe player.

Lewis Allesandra – a man who on his day was the scourge of even Championship defences (remember his display at Bloomfield Road in the League Cup during 2012?) has been offered a deal for this season. At only 30, there is hopefully something still to come from a man who didn’t seem to reach his potential at either Plymouth or Notts County, by whom he has just been released.

Shaun Miller – top scorer for the Shrimps before he went to Carlisle United – has also been signed on-loan from Crewe Alexandra for the season. Again, his career seems to have stalled somewhat in recent times but if he is able to re-discover his goal-scoring touch, the 31-year-old should prove to be a decent addition to the squad.

Another player who has arrived on a non-contract basis from Crewe is 19-year-old midfielder, Joe Lynch. The Manager clearly sees this as a chance for the young man to resurrect a career after being released by the Railwaymen during the closed season.

Ex-Liverpool trainee, 22-year-old Tom Brewitt, has been offered a twelve-month contract as well after featuring as a Central Defender for AFC Fylde last season. Along with Cole Stockton and Ritchie Sutton, another ex-Tranmere player has also joined the Morecambe ranks. Jim Bentley has tried and failed to sign right-back Adam Buxton a couple of times in the past – possibly because he didn’t think there were already enough Scousers on the books. I jest. So he has persuaded the 29-year-old to put pen to paper on a twelve-month deal as a direct replacement for Zak Mills.

Another player the Manager has tried and failed to sign in the past more than once is 25-Year-old Irish Under-19 and Under-21 International midfielder John O’Sullivan. Jimbo clearly has high hopes for an ex-Blackburn Rovers trainee who has been released recently by Blackpool as he has given O’Sullivan a two-year contract. If John does even half as well as the last player the Manager signed after being discarded by the Tangerines, everyone’s a winner…

Pre-season friendly matches don’t usually mean a lot. Being beaten three-nil by Seventh Tier Northern Premier League FC United of Manchester – a team three leagues beneath us in the Football Pyramid in England – was a bit of a shock, though. The video evidence of this was not entirely negative, however: the Shrimps played some decent and effective football at times. They won the next game at FC United’s fellow NPL members Bamber Bridge 0-2 but then lost by the same score at Holker Street to National League Barrow. Again, their performance – particularly in the first half – was good and but for at least two exceptional saves by Bluebirds’ keeper Joel Dixon, the result may have been very different. The only worrying thing was the way the team seemed to run out of steam as the game got older against a side which played fairly basic but increasingly effective football.

It’s a worry though, isn’t it? For years, Jim Bentley’s sides have tried to play the Beautiful Game. This against the flow of League Two, where sheer aggression and how physically big your players are seem to be qualities considered to be far more valuable by many rival managers.

The Shrimps visited Marine – to whom their initial place in the Conference will be forever owed – for a midweek game which they won at a canter 0-4. Lewis Allesandra – who had signed only a few hours previously – opened the scoring after being set-up by Shaun Miller, who also impressed. The final warm-up was played at Leyland instead of the Globe in order to allow the new pitch which has been laid over the summer a chance to bed-in. League One Accrington Stanley were the opponents and it is written into Morecambe’s DNA that they always lose to this outfit. Two-nil this time in the pouring rain but the Shrimps should have scored at least one to take the lead: John O’Sullivan missed a penalty.

Immensely sadly though, the game at Broadhurst Park proved to be his last as far as 31-year-old Andy Fleming was concerned. He was plucked from the Wrexham team who took-on the Shrimps in a pre-season practice game at Lancaster University almost ten years ago and has subsequently played over 250 games for the Shrimps. Andy suffered a serious injury – `a chondral defect to his left knee’ – early last season and spent much of it on crutches as a result. He played some of his best football for the Shrimps – in my opinion at least – when he returned towards the end of last season. But the pain in the affected area led to an MRI scan after the FC United match – and the end of the road for the young man.

“I’m absolutely devastated about the news of Andy unfortunately retiring from the professional game. Speaking with him when he came to his decision this week was one of the worst meetings I’ve ever had with a player. He’s the only outfield player still at the club since I played and we used to travel together to games and training every day. He’s a good friend of mine who I respect and think the world of as a person. He’s been a great servant to Morecambe Football Club and will go down in history as one of the best midfielders the club has had in the Football League.”

Whatever else posterity may have marked down for him, Andy Fleming will live forever as the first player to have scored a goal at the Globe Arena. But perhaps more importantly – in an age when professional footballers increasingly have reputations – rightly or wrongly – for being Prima Donnas, the man who dealt with the player on a daily basis for several years said the following about him:

“He’s probably been one of the easiest players to manage as he just gets on with the job with no fuss and has always gained the respect from his team mates. His attitude was always the same whether you were 4-0 up or 4-0 down, he just kept going and always gave his all no matter what and wanted to make the next tackle, win the next header or pass the next ball. He’s been a great character in the dressing room and someone I will be friends with for forever. He was a great team mate and has been an absolute pleasure to manage. This is a sad day for Morecambe FC and even more so for Flemo himself, but I’m sure everyone wishes him well in whatever he does next in his life and wish him and his young family every success in the future.”

The season starts for real next Saturday with a home game against Grimsby Town.