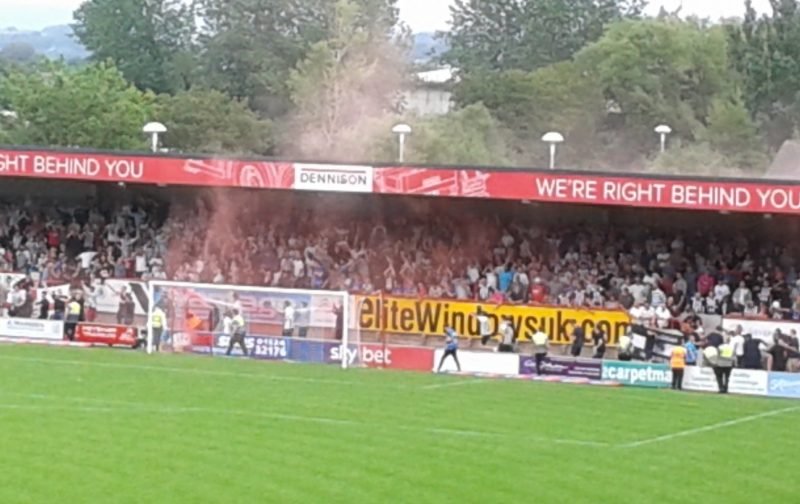 What did the Romantic poets say about the start of a new football campaign?

“Season of mists and mellow…”. Nah. Keats was talking about Autumn, not football. Was it Wordsworth then?

“Each Season starts with hopes anew – how quickly they do pass;

Sweet Reason says we’ll win the league: or else fall on our…”?

It could have been – it’s bad enough.

Whatever, Michael Jolley brought his Grimsby Town squad to the Lancashire seaside today with the same hope every Manager, player and fan has right across the EFL and every other league everywhere in England; Britain; the World; the known Universe and Accrington when faced with their first match of a new season: a win. When will we ever learn?

Anyway, the Cambridge graduate already knew that Newcastle United loanee Liam Gibson would be out of his squad with what sounds like a pretty serious injury. But he must have been hoping that new Club Captain James McKeown along with summer signings Matt Green, James Hanson, Moses Ogbu and Elliot Hewitt would improve a squad which finished one place above the Shrimps in seventeenth position in League Two last time out. McKeown’s promotion meant that today, there was the unusual sight in a League Two clash of the Captains of both teams standing between their respective sticks.

In the past, the clubs have clashed sixteen times in various competitions and the Mariners have only won three of them to the Shrimps’ seven. In their last five meetings, Morecambe have lost none but won three times, including coming from behind to take all three points at Blundell Park last year.

As for the hosts, Manager Jim Bentley had the luxury of choosing from a virtually full squad for a welcome change. Only A-Jay Leitch-Smith (with a hamstring strain) wasn’t available before the game. For his first starting line-up of the season, Jimbo chose a starting squad which included returnees Shaun Miller and Lewis Alessandra.

On a beautifully sunny day in Morecambe, the visitors brought 1073 supporters who noisily encouraged the men playing in their best-known black and white striped strip right from the off. It was hot – sitting in the stand in shorts and a tee-shirt, I was too hot. So god knows how the players on the pitch felt.  Maybe this is what spoilt the game as a contest in the first half – It was dire. The visitors probably shaded it with a series of corners which came to nothing. Barry Roche – never the strongest at dominating the penalty area – was lucky after twenty-two minutes when his weak punch went straight to an unmarked James Hanson. The Mariners’ player sent an equally weak shot back which Baz – well out of his ground – gratefully grabbed. After 34 minutes, Town had another half-chance: following ping pong in the Shrimps’ penalty area, the ball was poked weakly wide.

At the other end, McKeown had even less to do than his opposite number. The closest the Shrimps came to hitting the target was when John O’Sullivan hit a wild volley over the bar when well placed after half an hour. Other than that, Alex Kenyon ‘s even wilder shot right against the stand roof near the end was the sum total of their efforts. At the back, Razor Ruddock look-alike Adam Buxton seemed slow and cumbersome and his spot-kick taking was awful. The brightest thing about returnee Lewis Alessandra was his silver boots’ other than that he did nothing of quality the whole game, looked short of fitness and was booked for a nasty foul during the second half. Ploughing a lone furrow In the middle, Shaun Miller made lots of runs in the first half but – as the ball rarely came anywhere near him, remained completely anonymous. Rhys Oates got a bang on the head from impressive big blond Swedish Town centre half Ludvig Ohman after six minutes and was ineffectual afterwards. On the right, John O’Sullivan caught the eye early on only to fade. All in all, this was a weak and disjointed performance. Could it get any better in the second half?

The pace certainly increased and Morecambe saw more of the ball early doors. Miller looked like he was settling-in a bit better but the Mariners looked fitter, faster and more determined. They were first to almost every second ball and forced Roche into action several times before they scored the strangest of openers after 68 minutes. From a free kick on their right, the ball found its way to that man Ohman – surely in an offside position – at the far post. He headed it back across goal and – as the Morecambe defence had clearly stopped playing – an unmarked Elliot Whitehouse (who also looked offside) gleefully smashed it home in front of the massed ranks of the Grimsby contingent. The home team had committed the Cardinal Sin of not playing to the whistle – and the goal stood.

This had already been a bad-tempered affair with some nasty fouls by both sides and collective handbags shortly after the restart at the Town end. Things weren’t helped when Alex Kenyon talked himself into a booking after the goal as the ecstatic Mariner fans suggested he was responsible for the latest economic crash. “Banker” Banker!” they yelled en-masse loud enough to be heard on the Humber on the other side of the country.  Or was it another word, quite similar?

I thought that after that, there was only one team likely to win it. Morecambe played with what seemed to me to be increasing desperation. Jim Bentley shuffled his pack to no avail and the game ended – after a massive amount of injury time due to the niggles which had punctuated the contest – in farcical circumstances.

Big Baz came up for a corner right at the death; stayed-up when Grimsby half-cleared – and was left stranded as Town broke away for Max Wright to roll the ball home into an unguarded net from all of 30 yards.

So there we are – bubble well and truly burst yet again. Grimsby looked a distinctly average team to me. But they won this easily. The fact of the matter is that in 90 minutes of football, the Shrimps didn’t force the visiting goalkeeper into even one save of any sort. Having said that, impressive substitute Cole Stockton beat him right at the death only for Harry Clifton to kick the ball off the line. Captain McKeown won’t have an easier afternoon all season.

You wondered about the fitness of our players; you wondered about the formation. This display does not augur well for the rest of the season. It wasn’t as bad as their opening game last year at Crewe (it hardly could be – 6-0 really would take some beating) but on this showing, it is going to be an uphill struggle yet again for Morecambe and its long-suffering supporters. The Shrimps were twenty-second in tonight’s inaugural table. Grimsby were second. They won’t stay there but – if today’s performance is any guide – the Shrimps are probably around about where they deserve to be.