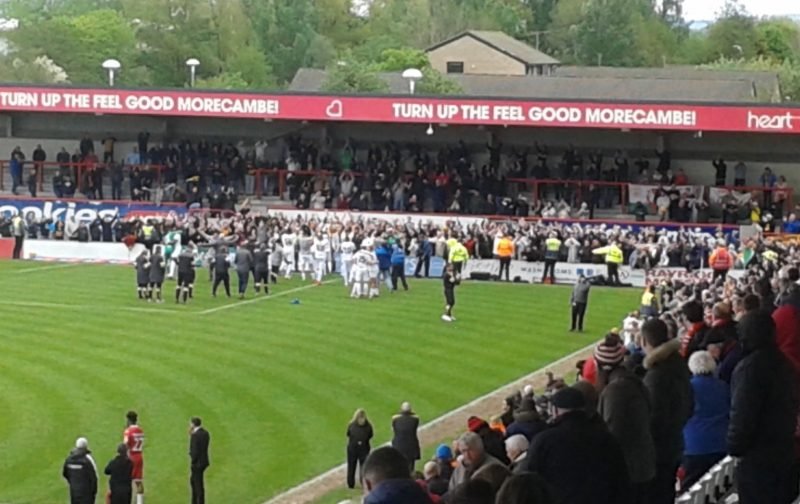 Newport Creep Over The Line.

It was the last match of another topsy-turvy season for Morecambe Football Club today.

The campaign started as badly as it could have with a wretched 6-0 hammering at Crewe. Yet it ended with a team featuring some potentially really effective players and managing their run-in towards the end of the season far better than they had done in a hapless – and hopeless – finale last year. Who can ever forget the utterly inept defeat at home against Barnet in the penultimate game, for instance?

This time last year, myself and partner Annie were on the edges of our seats in the sunshine at the Ricoh Arena and biting our nails hoping that Coventry City wouldn’t beat Morecambe – if they had, the Shrimps would have been relegated from the EFL. But there were no such worries today as we sat and shivered at the Globe Arena: Jim Bentley has steered the team to a safe position in League Two yet again. So for us, whatever happened this afternoon would just be a celebration of what Saint Jim has done for our club for the umpteenth time – and hope for better things in the future if the Manager is able to hold onto some of his better signings this term.

Elsewhere, though, this match actually meant something. Exeter City’s allocation of away tickets sold out ages ago for their game at Forest Green Rovers today. So the Grecian fans who would be standing and potentially getting soaked on open terracing whilst devouring FGR’s Quorn pies this afternoon would all be fervently hoping that Morecambe would win – or at least draw today. If City won at Nailsworth and today’s visitors to the Globe failed to take all three points, Exeter would find themselves in the League Two Play-offs at the end of play at the expense of Newport County. So for the Exiles and their travelling fans, today’s result on the banks of Morecambe Bay really meant something. Last Tuesday night, they won the game they had in hand on almost everyone else 2-0 against Oldham to leap-frog over Exeter and put themselves two points clear of the team from Devon in the lowest of the Play-Off positions: seventh.

The interest of other clubs right down to eleventh position in the League, however, were also focused on the Globe Arena today. There were rumours (which I personally doubt) that supporters of Carlisle United who considered the trip to Yeovil to see their team face already-relegated Yeovil to be simply too far to travel might make the short hop to Morecambe and support the Shrimps instead. Carlisle supporters, along with those of Colchester (facing Champions Lincoln at Sincil Bank) and Stevenage (at home against Cheltenham) knew that if their team won and both Newport and Exeter lost, any one of them could still end up in the queue to be promoted to League One by about five o-clock tonight, depending on what everyone else did.

In terms of past results between the clubs, County’s hopes of a win at Morecambe would not be very high: in eleven previous League Two meetings, they have only won twice and lost six. Morecambe are a bit of a bogy team for the Exiles in fact: they lost all five of their initial League Two fixtures against the Shrimps, home and away. Last October, the Welsh team were only able to draw against their visitors from Lancashire at Rodney Parade. Today, however, they really needed all three points to be sure of staying in the Play-Off pack.

Add to this febrile mix the fact that our very own Kevin Ellison has helped to stir the pot online this week as well, there was a recipe for quite a significant event at the Globe Arena today. Kev’s record against the Exiles is six goals scored and six assists in previous meetings. He has also been instrumental in penalties and own goals scored by Tom Naylor (now at Portsmouth) as well as a Red Card for this unfortunate gentleman and this has not been forgotten in South Wales. His notoriety there has merited an article from the BBC which states:

“Newport boss Michael Flynn says he has known Ellison for years and is full of respect for him.

“I know Kevin really well, he’s brilliant,” Flynn told BBC Sport Wales. “At his age, his fitness levels, he is still scoring goals and making a big impact. He has had a fantastic career and I just hope he has a quiet one on Saturday. We have had our little exchange of words, I will keep that between us! He wants to be the pantomime villain, he is what he is, we just have to stop him.”

With a Play-Off place to play for, Newport could never pick a better time to finally keep Ellison quiet, though County’s League Two rivals will hope the curse continues.”

As it turned-out, Kev wasn’t in the starting line-up today. He came on with just ten minutes left at a time when Morecambe were winning but frankly never had a chance to get into the game. But I get ahead of myself…

It was a very curious atmosphere at the Globe today. The weather was bright at times and the view over the Lakeland Hills on the way down the promenade to the ground was truly stunning. But it was bitterly cold in the shadows with a biting wind apparently directly from the Arctic as the match kicked-off. What a contrast to Coventry just twelve months ago…

There were quite a lot of the Amber Army standing behind the visitors’ goal in the first half.  But for long periods of the game, they were as silent and seemingly inert as the players representing them were on it.

Before kick-off, as the two teams lined-up, you could see that – man for man and probably kilo for kilo – the Exiles were a physically far bigger team than Morecambe. In my opinion, a white strip (which adorned Newport today) always makes individuals look larger than they actually are but there were some really big lads in the visiting line-up. If this was a Rugby Union game, you would really worry for the men in the red strip…

But it wasn’t Rugby Union and being big isn’t all that matters as far as soccer is concerned. Right from the off, there seemed to me to be a lack of both ambition and determination in the County side. This is a team which has knocked Premier league Leicester City out of the FA Cup this season and performed very creditably against possibly the best team in Britain – Manchester City – only a few short weeks ago. But there was no sign of this today.

Up-front, former Morecambe striker Padraig Amond was anonymous throughout the contest. Strike partner – and former Fleetwood forward – Jamille Matt was probably the biggest man on the field. But he was outplayed by Steven Old throughout. Until – crucially – the last ten minutes, when he managed to escape his markers and force home an equaliser for County whose significance could yet be priceless for the Exiles.

Until then, though, the Welsh team had played with a lack of urgency which I simply can’t compute personally. They stood off, they played on the back foot and they rarely threatened to assert themselves in a game they really should have been at least trying to dominate. The only real chance they had during the opening period came right at the end of the first half: Mark Halstead did brilliantly to parry a shot from Josh Sheehan but produced the luckiest save of the season when – from the rebound and with his back to play – he blocked a follow-up effort with his backside. Eyes in the back of your head barely does it justice…

However, this let-off apart, County had offered little. They were already losing as their own Academy Graduate Aaron Collins (born in the town and with a younger brother still on the books of the Exiles) scored with a sumptuous strike from outside the penalty area after twenty minutes. He didn’t celebrate the goal but the Morecambe supporters certainly did.

The Shrimps went back to the Changing Rooms at half time in the lead and good value for it. Any onslaught they might expect in the second half failed to materialise. Newport still played without ever really getting hold of the game or putting any concerted pressure on the home defence. In truth, the only reason they stayed in the game at all could be summed-up in two words: Joe Day. How he managed to keep out a shot from quicksilver Collins after 64 minutes, I really can’t say: it looked like a goal all the way. Two minutes later, he denied the same player with another stop of exceptional quality. In fact, the visitors could have been dead and buried long before Matt managed to give the visitors a draw which they barely deserved in all truth.

But they got it. Even more significantly, a draw was all they needed as things turned-out. Exeter and FGR couldn’t conjure a goal between them; Carlisle couldn’t score at Yeovil either and Stevenage fell one point short despite a 2-0 win over Cheltenham whilst Colchester’s tremendous 0-3 win against Lincoln was also too little, too late.

So the celebrations of the visiting team and their supporters at the end of the game somewhat overshadowed Morecambe’s celebrations once the game had finished.

Who cares? We stayed behind to clap the players and listened to the speech Jim Bentley made to us all. He took no credit for his own efforts in yet again keeping the most poorly-supported team in the EFL yet again. But he deserves loads of it.

Elsewhere, Macclesfield managed to survive right at the death with a draw against Cambridge as another County – Notts – tamely lost 3-1 at Swindon to destroy their claim to be the oldest Football League Club In The World. Shame for them – but well done to Sol and the boys.

As for Newport, they were lucky today and if they are to progress any further this term, they will have to play a lot better. But there is no doubt that Michael Flynn has done a fantastic job since he was appointed and he, at least, must be saluted for his achievements in the last couple of years.

The last word goes to him:

“I am feeling a lot better than I was earlier because we were outplayed today. Morecambe had a lot of chances. We huffed and puffed but we were not at it in the final third or at the back. But we kept going and it was an agonising wait to find out if the draw was enough. If I am being honest I felt sick all the way through the game, my nerves were terrible.”