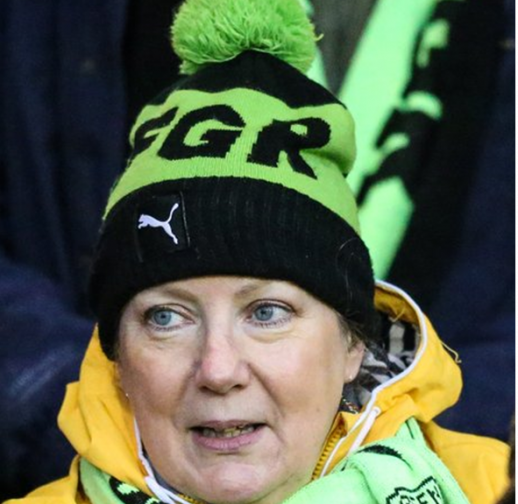 Forest Green Rovers travelled to the North Lancashire seaside today looking to avenge their one-nil home reverse against Morecambe at the New Lawn last November. Mark Cooper’s side travelled-up from Nailsworth on Friday and stayed locally overnight. The Gloucestershire club were seventh in League Two when they arrived at the Globe Arena and therefore in the lowest of the Play-Off positions. However, the only Vegan football club on the planet’s recent form has been patchy in the extreme. They lost their last game at home against leaders Lincoln City 1-3 seven days ago from a winning position. No surprise there. But they also lost three of their four League Two games during February, including a 1-2 home reverse against seemingly doomed bottom club Notts County. Thus – whilst FGR were hoping to get their Promotion Train back on the rails, the Shrimps were looking to remedy their own recent form – two defeats on the bounce – and try to put some daylight between themselves and the rest of the damned at the bottom of the EFL. Most notable of these are Macclesfield and a club who haven’t won for seven games and lost every fixture they were involved in last month: Port Vale. The Shrimps were certainly helped by the return of Aaron Wildig after a long lay-off with injury: he scored the decisive goal against Forest Green last year and is one of few genuinely pedigree players currently on the club’s books.

Previous EFL history shows a completely even record between the two clubs: one match won; one drawn and one lost so far. According to the official FGR website, the clubs have played each other twenty-two times in all. Morecambe have won twelve of these games; the Green Devils only five. As far as today’s contest is concerned, Manager Cooper said yesterday:

“We don’t want any excuses. It’s a long way, so what? Morecambe had a long journey and came here and beat us. There’s no excuses tomorrow. It’s roll your sleeves up, get your head down and go and perform.”

It was sunny but very windy and soggy underfoot as the match kicked-off. Rhys Oates was the first player to chance his arm in the game. After three minutes, he took a shot from distance which was so far away from the target that it went for a throw-in to Rovers. The young striker got it spot-on just two minutes later, though, when – after an excellent run and shot by Aaron Collins – he got on the end of a rebound from visiting goalkeeper Lewis Ward who was only able to parry Collins’ initial effort and steered the bouncing ball at full stretch into the net at the far post. FGR came close to equalising with nine minutes played – when former Bristol City striker Shawn McCoulsky received a pass from Joseph Mills on the Forest left, controlled the ball and struck a shot which was cleared off the Morecambe line by Richie Sutton. The Green Devils – with the wind at their backs – then enjoyed a period of concerted pressure. With a quarter of an hour played, Udoka Godwin-Malife made good progress down the FGR right and cut the ball back to Christian Doidge but the Welshman’s clever flick was brilliantly saved by Mark Halstead low down in the home goal. The visitors weren’t having it all their own way, though. After eighteen minutes, Reading loanee Ward excelled himself to get his hands to a fierce shot from Collins, who had cleverly played his way into the opposition penalty area. This time, Paul Digby was on hand for the visitors to ensure nobody in a red shirt was able to follow-up the loose ball again. In an end-to-end encounter, Rovers had the next decent chance. With twenty-six minutes on the clock, George Williams took a free-kick; the ball was headed across the Shrimps’ penalty area by Gavin Gunning but Halstead again worked wonders to thwart an unmarked McCoulsky when it reached him and the Morecambe defence were able to clear the danger. There had been thirty-five minutes played when Morecambe went even further ahead. Collins yet again hit the target, this time beating two defenders before shooting unerringly through a crowd of players on the edge of the penalty area past the despairing right hand of Lewis Ward to make it two-nil to the hosts. Four minutes later, the Shrimps could have gone even further ahead. Aaron Wildig beat Godwin-Malife on the Morecambe left and slung over a cross which was only just fractionally too high for Collins to get his head to. Forty minutes had been played when the game was stopped so that Ritchie Sutton could get treatment for a nasty-looking cut close to his right eye after doing well to block a dangerous cross from Williams which seemed destined for Doidge in the middle. The Green Devils had the last chance of the half when Halstead easily fielded a weak header from Doidge. But the Shrimps went in with a deserved lead and the luxury of anticipating playing with the wind at their backs in the second half.

However, the visitors came out with a determination and intent which they had rarely shown during the first half and dominated the play in the opening period of the re-start. If Williams had taken a little more care following good play by the visitors after almost an hour, Rovers could have been right back in the game. Instead, he fired straight at Halstead when well placed and the chance was lost. Bennett had a sniff of a chance after 63 minutes but FGR had another golden opportunity to reduce the arrears with 66 minutes gone. Carl Winchester took a shot from close to the goal only to see Halstead again dive to his right to brilliantly keep the ball out of the net and his defence to reach the second ball first in order to clear the danger once more. But things changed again after 72 minutes. Oates out-muscled Paul Digby on the by-line and slipped the ball across the area for Alex Kenyon at full stretch to poke the ball past Ward into the bottom corner of the net. Three minutes later, Alex would have scored again if it wasn’t for a fantastic save from the visiting goalkeeper who went full-length to his right to keep out a shot from quite some distance. Just before Oates had missed the goal again after 82 minutes, FGR’s Mills took a shot which would have hit the target had it not slammed into team-mate Williams first. To add insult to injury, Williams was in an off-side position in any case. But, undaunted, Williams forced Halstead into a save after 83 minutes and was denied again when his shot was cleared off the line by Steven Old three minutes later with Halstead beaten for once. But for FGR today, it just wasn’t to be. So Morecambe deservedly won and, in doing so, achieved their first double for quite some time. It was a good team display and there were some excellent individual performances, most notably by official Man of the Match Mark Halstead; returnee Aaron Wildig, Rhys Oates – who scrapped for everything throughout the game – and Ritchie Sutton, who has certainly re-discovered his shooting boots after Jim Bentley gave him a chance to resurrect his stalled career just a few weeks ago.

With Yeovil losing to Lincoln last night, it was All Change again at the bottom of League Two. Macclesfield lost at home 1-3 to the team from Milton Keynes having led at one point. Notts County were tonked 4-1 at Cheltenham and Cambridge only managed to draw at home against Oldham. Port Vale won for the first time in ages and moved to twenty-first position as a result. Morecambe are one point and one position better off than them and a whole eight points clear of the drop zone. So it was a good day altogether for Jim Bentley and his men. In the meantime, FGR’s latest reverse saw them fall to ninth in League Two.