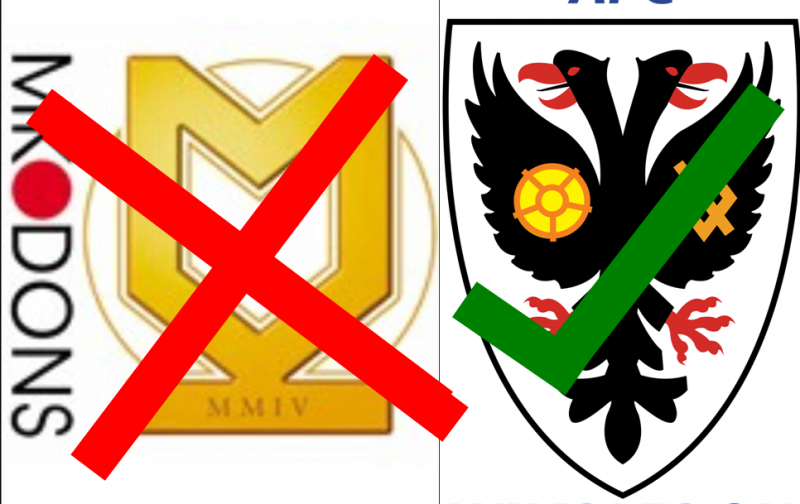 A team from Milton Keynes visited the Globe Arena tonight hoping to join the club they initially impersonated and finally have been eclipsed by – AFC Wimbledon – in League One next season. The fact that this outfit is in the EFL at all is both a scandal and a disgrace. They are the only club in the Football League who have stolen the identity of another club altogether and the fact that they still attempt to masquerade as them by calling themselves `Dons’ is one of the most shameful things that has ever happened in English football history. There is only one Dons – and they are the genuine successors to the original Crazy Gang who still hope to return to spiritual home Plough Lane after years of re-inventing themselves and battling through the various leagues at the bottom of the football pyramid in this country: something Morecambe’s opponents tonight have never had to do. Good luck to AFC Wimbledon and more power to their elbow. The previous meetings between Morecambe and their visitors tonight should be struck from the record and I’m not going to summarise them and I personally couldn’t care less where Milton Keynes Cuckoos are in the table or what their form is: they shouldn’t be there, end of story.

It was stormy and occasionally wet at a freezing Globe Arena as the game kicked-off. The Shrimps took advantage of the gale to play with it at their backs during the first half. Alex Kenyon chanced his arm straight away with a shot from a long way out which went over the bar. Ten minutes later – as the wind played havoc with the corner flags – he tried again and came closer with a volley which went narrowly wide of the goal. The Shrimps came even closer with a quarter of an hour played when the visiting goalkeeper did well to deny Ritchie Bennett from close range after the striker had seen a shot blocked and bounce back to him. The weather then intervened as a flag was blown off a corner post onto the pitch. But the breakthrough which was coming as the Shrimps dominated the play arrived after twenty-one minutes. Rhys Oates did well on the Morecambe left before sending over a perfect cross which Big Bennett headed home to give the hosts the lead. They almost went further ahead when Kenyon’s header from a corner was well saved with half an hour on the clock. Four minutes were still scheduled to play when Zak Mills made progress down the wing and sent over a cross which one of the visitors’ huge midfielders headed into his own net. So it was two-nil to the hosts at half time – and they were very good value for it.

Probably everybody expected it to be a different story during the second half with the team from Milton Keynes playing with the wind – probably even stronger than ever – now behind them. But Morecambe went even further ahead after 56 minutes when, following the visitors’ failed attempts to clear a corner, goal machine Bennett scored yet again. This time, he cut in to the edge of the penalty area and curled a perfect shot into the top corner. What a goal! What a player! The arrears were reduced after seventy minutes with a lucky, deflected shot. Andy Fleming then made a welcome return from a long-term injury as a substitute for the last twenty minutes or so. The visitors then reduced the arrears even further following a rare – and uncharacteristic – mistake by Mark Halstead who dropped the ball in front of a visiting forward. But then Golden Boots Bennett came within a whisker of his first hat-trick for the Shrimps when his shot from the centre of the penalty area crashed against the bar. At the other end, Halstead redeemed himself with an excellent save after 82 minutes. But the game swung again with just four minutes scheduled to play when substitute Kevin Ellison brilliantly played-in Aaron Collins on the counter-attack and he expertly took the ball around the visiting goalkeeper and put the ball into the back of the net. And that was it.

This was an excellent victory for Jim Bentley’s revitalised team. They found themselves in nineteenth position in League Two at the end of the game. Elsewhere, Cambridge slipped below them in the League Two table with a draw at home against Crewe and Macclesfield’s match was postponed because of a waterlogged pitch. Port Vale made it two wins in a row with a 3-0 victory over struggling Yeovil and the shock of the night came at Brunton Park, where Morecambe’s next opponents – bottom-of-the-table Notts County – won 0-3.

As for the team from Milton Keynes; three of their players were booked and… what am I saying? I couldn’t care less personally about what happened to them here tonight except that they lost. I’m not going to bother to even append their line-up to this report: they shouldn’t be in the EFL at all in my opinion and I personally hope they get relegated sooner or at least later.