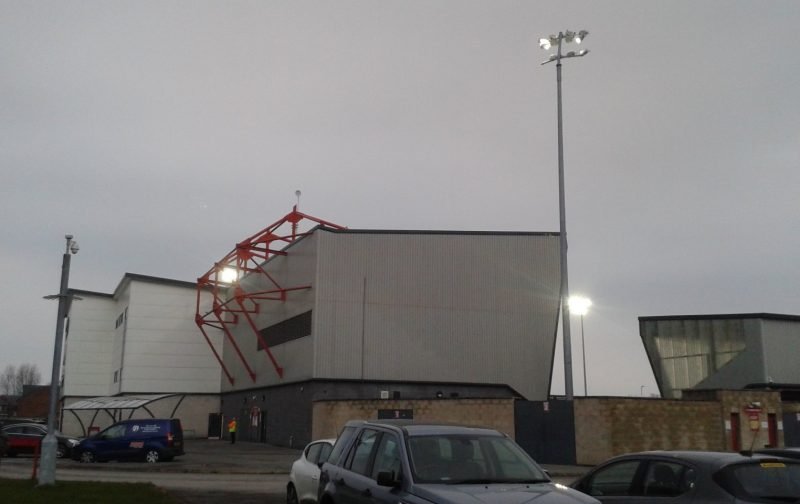 In a week where the new owners of Morecambe Football Club also joined the Board at Rugby Union club Worcester Warriors to set Social Media Rumour Mill grinding again, the Shrimps found Business Carried On As Normal on the pitch. If there is such a thing as `normal’ at Morecambe these days… Apart from the routine task of finding somewhere to actually train which does not involve passing dogs joining-in their practice games (as happened very recently on a school playing field Jim Bentley had managed to borrow for the session), the man with the smallest budget in the EFL also has had to cope with a mounting list of injuries to keep any momentum going in a season of stuttering performances so far. The huge gulf between the Shrimps and the Imps was there for anybody to see last Saturday at Lincoln during the first half in particular. But few people expected Morecambe to win at Sincil Bank – today’s game, however, was a totally different kettle of fish.

The visitors to the Globe Arena this afternoon were Cambridge United, who found themselves one point and two positions below their hosts today in League Two and right above the dead zone currently inhabited by Notts County and rock-bottom Macclesfield. In past contests, Morecambe had a slight edge with four victories out of nine games played previously, just two of which have been drawn. Cambridge’s future fortunes were this week placed in the hands of Colin Calderwood, who has had quite a varied history in football management – successful at first; less so in recent times. One of the Scotsman’s opening messages to his new charges was:

“If there is fear within the Dressing Room; get rid of it. Be positive!”

Would they be positive? A poll run in the club’s Twitter feed suggested their fans certainly were: no less than 56% of those who voted expected the U’s to actually win the game. Those who actually took the trouble to travel today were rewarded for their efforts by admission, a drink and a pie being paid for by the United directors. Good for them. We could have done with a similar gesture from our directors last week at Lincoln: I paid £39 for two people (including one concession) just to get in to witness the dismal performance our lot put up there. But Hell will probably freeze over before anything like that happens to Shrimps’ supporters….

It was grey with occasional threats of rain in the air as the match kicked off. Ade Azeez made a challenge on Steven Old early doors which Morecambe’s big Kiwi centre half did not appreciate and there was a frank exchange of views about it between the two with just two minutes played. Kevin Ellison had the first pop at goal a minute later but his wild volley from a long way out missed the target with quite a lot to spare. Jason Oswell then headed narrowly over from a Shrimps’ corner after six minutes. The hosts were probably marginally on top when they got their first scare with about ten minutes played: Azeez took a shot which found its way through to Paul Lewis at the far post but his effort was bundled off the line by last-ditch defending by the Morecambe rearguard. George Maris then tried his luck with thirteen minutes played when he controlled the ball, turned and took a shot which narrowly missed the target. Following good work between the same player and Azeez, Maris again took a pop five minutes later which Mark Halstead in the home goal did well to keep out. Oswell had a header from about eight yards out easily saved by David Forde with twenty-five minutes on the clock but the Morecambe forward was hauled-back by U’s central defender Harry Darling when he was through on goal after half an hour. For whatever reason, referee Eddie Ilderton showed Darling only a yellow rather than a red card and United collectively got away with it. Jordan Cranston then forced Forde into an outstanding stop from the resulting free kick, which went straight through the United wall. Vadaine Oliver then shot narrowly over with thirty-three minutes on the clock but a half of generally poor quality in which both teams seemed overly tentative stuttered to a close without anyone finding the back of the net.

Morecambe went straight onto the offensive at the start of the second period. With only two minutes played, Oswell’s header from Cranston’s cross was brilliantly blocked on the line by Greg Taylor. The Cambridge central defender somehow managed to clear the ball over his own bar as he stood directly underneath it. It was all Morecambe as the half progressed with both Ellison and Oliver trying their luck as the visitors increasingly played on the back foot and seemed to be trying to eke out a draw.

Forde did well to stop a volley from Kev after 62 minutes with his boot but the visitors’ resilience only lasted until the sixty-fourth minute. A long ball from Cranston was flicked forward towards the Cambridge goal and Vadaine got there just before a desperate visiting goalkeeper to loop the ball over him to deservedly put the home team a goal to the good. United’s new manager immediately shuffled his pack with a double substitution. It made little difference. Substitute Liam Mandeville had a shot blocked on the edge of the Cambridge area with sixty-eight minutes played. Four minutes later, Forde saved again from Oswell and then excelled himself to push a fierce shot from Ellison away from the top corner of his net for another corner kick after 74 minutes. Given their team’s proclivity to throw games away from a winning position in recent times, Morecambe fans’ hearts were in their mouths after 84 minutes when substitutes David Amoo and Reggie Lamb combined for Amoo to produce a looping shot which Halstead was forced to claw away one-handed. But Morecambe substitute Andrew Tutte sealed the game for the Shrimps just a couple of minutes after coming on when he ran into the visitors’ penalty area and unleashed a phenomenal shot which would have beaten any goalkeeper anywhere on the planet: Forde stood no chance. Tutte was then immediately booked for his understandably enthusiastic celebration, which seemed a bit harsh. But still Morecambe dominated the play and Kev got his just deserts in injury time when he finally managed to beat the opposition goalkeeper by side-footing Cranston’s low cross into the bottom corner from twelve yards out.

So, just like at Lincoln last week, Morecambe played far better in the second period than they did in the first. This was a comprehensive victory at the end of the day. Colin Calderwood will have his work cut out to change the fortunes of a team which looked nervous throughout and basically collapsed as soon as the Shrimps got the ball in their net. The welcome three points moved Jim Bentley’s team up one place to nineteenth in League Two. They are far from out of the relegation woods yet but Cambridge must be looking ever more nervously over their shoulders to Notts County – hammered 4-0 at Grimsby today but a mere point adrift of them – and Macclesfield, who picked-up a point at home today and are just three points behind them right at the bottom of the EFL.