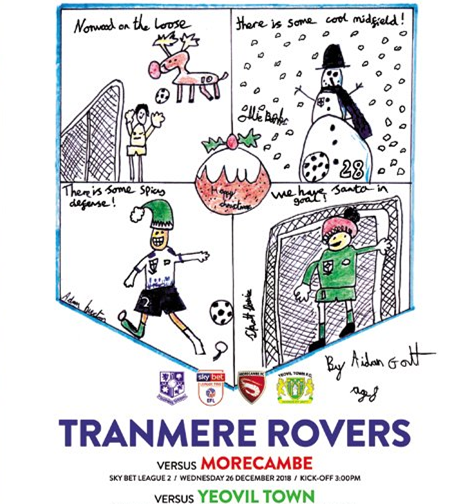 If Only We Could Scrap The First Half…

Tranmere Rovers and Morecambe faced the end of 2018 with very different hopes for the future. For the Merseyside club, there was the hope of moving from the fringe of the Play-Offs into the actual fray or even to go one step better and win automatic promotion to League One. In just over a week’s time, Rovers will appear live on terrestrial television at Prenton Park when a Friday night tie against mighty Tottenham Hotspur in the Third Round of the FA Cup will be broadcast to the nation. They’ve earnt this: from the adversity of relegation to the Conference just three years ago, the club have been guided by Micky Mellon to the potential of even greater feats than a return to the EFL. Having said that, Tranmere’s recent League form has not been brilliant. They lost at Bury last time out and were beaten in the league game before that by struggling Notts County at Meadow Lane.

Morecambe, meanwhile, won their last game 3-0 against Cambridge to put an end to a string of six matches without a victory. They lost badly against nobodies Halifax in the FA Cup during this run of games to put an end to any interest they had in all the knock-out competitions they have competed in this season. All they have to look forward to during 2019 is to keep their precarious hold on their place in the EFL. For the Shrimps, life continues to be a struggle. They are perennial favourites for relegation and have a succession of boardroom disasters trailing in their wake over recent seasons. With the smallest fan base in the whole of the Football League, Manager Jim Bentley must be green with envy as he wakes-up to see Tranmere Rovers’ training facilities near to his home and then has to face the weekly and sometimes daily chore of finding somewhere for his own players to train sixty miles further north. Altogether, the move from Christie Park to a supposed Brave New World at the Globe Arena has been a recipe for any football club how not to make progress. Far fewer fans than ever now attend. The staff have experienced failures to be paid under both the previous and the current regime. The facilities which a previous Chairman had assured one and all would be on a par with any of their competitors have been unavailable to the club for longer than most people care to remember and parts of the stadium cannot be used by the club at all for legal reasons. You couldn’t make it up: the only thing that hasn’t gone wrong so far is that Jim Bentley has managed – on the smallest budget in the EFL – to keep the club in the EFL against all odds.

Both ends of the Rovers team today contained former Morecambe players who Jim has made it clear he would have liked to have on his books currently: Centre Forward Cole Stockton led the attack and Captain Scott Davis’ job in goal today was to try and keep his old team out. The record between the two teams stretches to only three previous meetings in the EFL: Tranmere have won all three of them. So the omens for the club from North Lancashire weren’t good as the players entered the arena under an overcast sky close to the River Mersey.

It took only four minutes for Stockton to remind the Shrimps what they are missing. He received the ball from Connor Jennings just inside the Morecambe penalty area and unleashed a ferocious strike which beat Mark Halstead all ends up to his right on the way into the net to put the men in the white strips one-nil up. Four minutes later, Stockton’s half-volley after being set-up by Jake Caprice wasn’t as accurate and Halstead was able to deal with it. Morecambe played some tippy-tappy stuff after that which never seriously threatened the home rearguard although Scott Davis was forced to palm- away a header from Steven Old following a corner for the visitors after 25 minutes. Halstead had to save again from Stockton after 28 minutes before Tranmere went even further ahead a minute later. James Norwood extended his tremendous run of striking form by dispatching a pin-point cross from Caprice with a shot from the centre of the penalty box which again gave the visiting goalkeeper little chance. Thirty-five minutes were on the clock when Jay Harris tried his luck with a spectacular volley from all of twenty-five yards out which ended-up on the roof of the net. But it was only a matter of time before the Wirral team added to their total. Harris didn’t miss this time when Liam Ridehalgh’s cross found him totally unmarked in the centre of the Morecambe box and he powered the ball home with his head just before half time.

So the visitors went in at half time three goals down. This is becoming a pattern in recent times. They trailed by a similar score before rallying in the second half at Lincoln two weeks ago and finally reducing the arrears. Last week, they were not much better than Cambridge after 45 minutes before overwhelming the U’s during the second half. Today, they looked beaten after the first period. Would they do anything to improve their fortunes in the second period?

They seemed to have at least tightened-up a bit at the outset of the new half and started reducing Tranmere to the occasional chance. Jordan Cranston even managed to pull a goal back with sixty-five minutes on the clock with an unstoppable shot into the top corner of the net from all of thirty yards out. They applied some concerted pressure of sorts on the hosts at times but Tranmere – with Stockton usually the pivot of their efforts – always looked dangerous on the counter-attack. Both teams had half-chances with Tranmere substitute and former Shrimp Paul Mullin coming close at one end and Rhys Oates and Cranston again coming close at the other. But at the end of it, first half superiority alone guaranteed a win for Micky Mellon’s men.

So Tranmere continued their 100% record against the Shrimps with a second successive double over them. The former Fleetwood Manager has his team playing some good, effective football and has some outstanding players in key positions. The same cannot be said for Tranmere’s opponents today. They simply weren’t good enough again during the first half, when the game was effectively lost. It is a worrying time once more for Jim Bentley both on and off the field as the New Year approaches. With Macclesfield winning the Battle of the Dead Men at Meadow Lane today and thus swapping places with opponents Notts County whilst Cambridge won at home, Morecambe are far from out of trouble at the bottom of League Two. Their hopes of survival are probably as much based on their hopes that potential rivals will fail or teams such as Oldham (6-0 losers at Carlisle today) fall into the relegation mix before May 2019. The Shrimps dropped one place to twentieth tonight. Tranmere, meanwhile, went up a single position to eighth in League Two.

One Reply to “Tranmere Rovers 3:1 Morecambe”