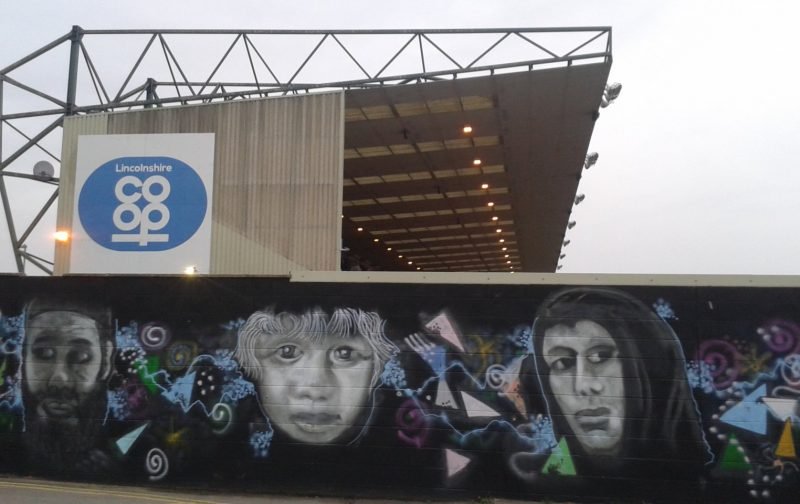 Morecambe in a Winter Blunderland…

Morecambe made the long journey across the Pennines to visit Lincolnshire to face the county’s town’s major club today. The last time they visited was last year to take part in Lincoln City’s inaugural game back in League Two after seven years in the wilderness of the Conference/National League. On that occasion, a Lancaster Bomber flew over Sincil Bank to mark the event. Today, however, the Imps collectively made a gesture which makes Lancaster Bombers; non-League obscurity or virtually anything else for that matter pale into irrelevance in comparison to the reality it signified. Their players wore black armbands as a mark of respect for Grace Millane, a former Lincoln University student, who was found murdered in New Zealand earlier this week. Additionally, everyone in the ground respected a one-minute silence before the match kicked-off in her memory.

To return to the world of football, the job the Brothers Cowley – Danny and Nicky – have performed at Sincil Bank in recent years has passed into legend. Under their tutelage, City have played their way back into the EFL and beaten Premiership teams such as Burnley in the FA Cup on the way. Next month, they will travel to Goodison Park to be entertained by Everton in the Third Round of this competition.

My, how Morecambe Manager Jim Bentley – a life-long Toffees’ supporter – must envy them. How we – collectively as Morecambe fans – envy the club: the 5,521 tickets allocated to their supporters have already been taken-up.

This is more than could legally fit in the Globe Arena back at home in Lancashire let alone could ever realistically be expected to turn-out to support the Shrimps in any circumstances… Forgive me whilst I indulge in a deep, deep sigh…

The Imps started the game second in League Two but just two points behind the team from Milton Keynes with a match in hand. Morecambe, meanwhile, were nineteenth in the division with all hope of playing anybody in the FA Cup Third Round already in ruins. In the past, previous meetings in all major competitions had ended-up absolutely even with five wins each and two draws, both of these occurring last term.

Today, there were no aerial celebrations at the ground at least before the match. With bruisers like Matt Rhead in your team, however, an aerial battle is always guaranteed during it… (Having said that, the only time we saw Matty during the first half was when he was engaged deep in conversation with Morecambe substitute Vadaine Oliver near the corner flag in front of where we visitors from the West side of England could be found.)

Lincoln went straight onto the front foot right from the off and it was one-way traffic for the first seven minutes, when the Imps scored the first of their goals today. Tom Pett and Harry Toffolo had already combined well on the Imps’ left flank but on this occasion, the cross which was delivered into the middle through a Shrimps’ defence which was standing-off throughout was sidefooted home by Harry Anderson. Right from kick-off, the home team continued to pour forward but the Shrimps had a chance to at least remind their hosts that they were present on the field following an interception after about ten minutes but Jordan Cranston – not for the last time in today’s game – completely wasted the opportunity with a hopelessly optimistic shot from a long way out which missed the goal by a considerable distance.  Despite another poor effort from a free kick by Cranston, Lincoln continued to press high up the pitch and when Anderson turned provider in the twenty-fifth minute, his low cross from the right was almost turned-in by Pett. Then former Barnet forward John Akinde tried his luck with a clever and powerful turn and shot just one minutes later. On this occasion, Shrimps’ goalkeeper Mark Halstead did well to push the ball away for a corner. So it was no surprise when the hosts went further ahead shortly afterwards. Referee Seb Stockbridge – who had a very erratic game today – judged that visiting Captain Alex Kenyon had fouled Shay McCartan in the penalty area after half an hour. Akinde rolled the ball past Halstead easily to continue his excellent scoring record against Morecambe and City were two-nil up – and deservedly so. It seemed just a question of how many the Imps were going to rack-up long before Jason Shackell unleashed a shot direct at goal from a free-kick on the Lincoln right after 33 minutes. The shot was accurate but not particularly powerful but it seemed to me at least that Halstead only moved his arms in a belated attempt to save it after the ball had actually passed him on its way into the top left corner of his net to make it three-nil. And so it went on. Morecambe were being run ragged, looked panic-stricken a lot of the time and were shapeless in midfield and offered virtually no threat at all up-front. Although Cranston had a poor half, he can’t be criticised for his attitude: at least he tried. Too many of the rest of the team didn’t: Jason Oswell was invisible; A-Jay Leitch Smith ineffectual and Liam Mandeville extremely disappointing for a man of his undoubted talent.

The weather had been steadily been getting worse as the game progressed and Storm Deidre scraped her icy fingernails right across Lincolnshire today in her violent and unwelcome progress right across the country. The sky darkened; the wind shrieked ever louder and increasingly heavy, freezing rain started cascading from the clouds. But Morecambe fans’ biggest fear was that the Dyke – already breached three times – would well and truly burst during the second half.

In fact, they were probably marginally the better side. Whether this was because Jim Bentley had managed to galvanise his men at half time in the Dressing Rooms or Lincoln had taken their feet off the gas with such a seemingly unassailable lead, who can say? Vadaine was sent into the fray to try his luck immediately with a shot which Grant Smith in the home goal was forced to turn away for a corner. Aaron Wildig – one of Morecambe’s few genuinely accomplished players – also appeared and brought some sort of stability and creativity to the midfield, however belatedly. As a sometimes eerie silence fell on most of the stadium (with the exception of the noisy portion of the home support high up in the Co-Op stand), the game started to be played increasingly in the home half. The Shrimps came close to reducing the arrears when a shot hit the post with Smith beaten only to be trundled over the line and the score disallowed. But Kevin Ellison restored some sort of respect to the scoreline after 80 minutes when he steered substitute Rhys Oates’ low cross past Smith to reduce the arrears. There were a couple more half chances for both teams but the match finally ended in the freezing rain 3-1 to the Imps.

City return to the top of League Two as a result of the fixture at Newport being postponed because of stormy weather in Wales. Good luck to them. As for Morecambe, there were mixed messages from today’s match. In the first half, their mistakes and poor application handed the game on a plate to the Imps. In the second half, they looked like a far better prospect. They found themselves twentieth in League Two at the end of the contest.