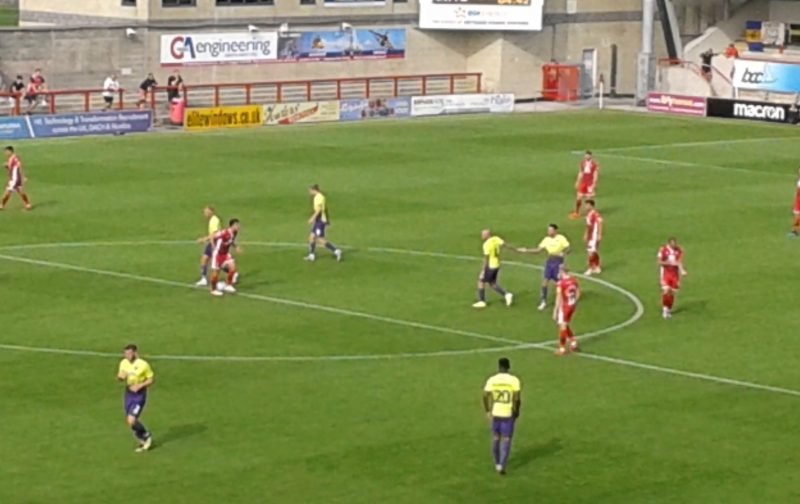 Exeter City arrived at the Globe Arena today currently unbeaten in the EFL. They beat Macclesfield on the opening day of the season; won at Stevenage in their second game and then drew their next two League Two matches; the latest last Tuesday at Oldham where they might have lost if Dean Moxey had not managed to brilliantly clear a shot from Shrimps’ Old Boy Zak Mills off the line.

Morecambe have a poor record against the Grecians. In all their contests in the old Football Conference, the first time in four seasons of trying that Morecambe actually managed to beat them was at Wembley in the Play-Off final which saw us enter the Football League for the first time in 2006. Since then, the Shrimps have lost six of sixteen subsequent meetings and won only three.

Exeter as a club are run on a totally different basis to that of their hosts today. We’ve all seen what has been happening at poor old Bury and probably think: but for the grace of god…

So let’s go back a quarter of a century. In 1994, Exeter were in such a financial mess that they had to sell their ground in order to remain solvent. It was saved from being turned into a housing development when Exeter City Council stepped-in and bought St James Park from Beazer Homes before leasing it back to the club. But things did not improve. According to the club’s own website, this is the situation the Grecians found themselves in sixteen years ago:

“The close-season in 2003 proved to be the most traumatic in the club’s history. Police raided the club and took the chairman, his wife and the vice-chairman (away) for questioning. Debts were mounting and the majority shareholder asked the Exeter City Supporters’ Trust to take over the day to day running of the club.

The club’s history has been played out predominantly in the bottom division of the Football League, but at the end of the 2002/03 season, City were relegated to the Football Conference. This meant that the club would start its centenary year outside of the League that (they had) been a member of for over 80 years”.

Sound familiar? Bury have been in the Football League for even longer: 125 years. But back to Exeter:

“The Supporters Trust became the majority shareholders… and the aim was to stabilise the finances, which involved a CVA (a Company Voluntary Agreement as a way of avoiding bankruptcy) and to turn Exeter City into a true community run club.”

In the last couple of years, the club has moved forward both on the field and off it. They have done this without a moneybags; a publicity-seeking charlatan or even a well-intentioned chairman who owns the club. St James Park had more in common with Christie Park than the Globe Arena just two years ago, with old stands and uncovered areas within the ground. Now – under the guidance of its own fans – it boasts the brand-new Adam Stansfield Stand (named in honour of the club favourite who died from cancer during 2010 aged just 31), which replaced the ninety-year-old Grandstand which could previously be found there. This has been financed by the building of student accommodation for the city’s University behind the Home terrace, the Big Bank. At the same time, the St James Road end of the ground – previously open to the elements – had been covered. All this in a Community-owned football club. It worked for Exeter – it works for plenty of other EFL clubs. Could this be a blueprint for the future for other football clubs in Britain – including ourselves?

Exeter brought the Devon Riviera weather with them to Lancashire today. It was sunny and warm throughout the game. Morecambe started brightly and played better in the first five minutes than they have done at home so far this season. The visitors – in a very distinctive almost fluorescent lime green strip with purple trimming, shorts and socks looked lively as well though. They hunted in packs, constantly backing each other up and playing the ball mostly on the deck. Out on their right-wing, they had a constant hand full in the shape of the tricky Randell Williams. He was beating the Shrimps’ defence at will and if his final ball had been more accurate, the host’s could have found themselves in trouble even earlier than they actually did. City played with a purpose lacking in much of Morecambe’s play and seemed to me at least to be a step faster in most of what they did. They took the lead after 21 minutes. Nicky Law fed Lee Martin, who made good progress down the Grecian right and slipped a simple but accurate ball along the ground to his Captain Jake Taylor in the penalty area. He duly swept it past Barry Roche as if it was a practice match. It soon got worse for Morecambe. Just five minutes later, Exeter were running the Shrimps defence ragged again with Law instrumental once more and the ball eventually arrived at the feet of Andrew Tutte right in the centre of his own penalty area. He should have booted it into Row Z but – in line with what I thought was an unacceptably poor performance from him throughout the whole contest – he was caught in two minds and Lee Martin thought that Christmas had come early as he struck the ball past a helpless Barry Roche.  Exeter at this moment were cutting the hosts to ribbons and threatening to swamp them. Big Baz prevented it from getting even more dire with a reaction save with his feet from an unchallenged Law with half an hour on the clock. City were brighter, quicker, more incisive and actually a class apart in my opinion. In injury time, they got the ball in the net again with a Lee Martin header but the goal was chalked-off, apparently because it hit a team-mate who was offside on its way into the net. However, right against the run of play and with almost the last kick of the first half, early substitute Lewis Allesandra reduced the arrears with an emphatic volley into the top corner of the net. It was Morecambe’s first attempt on goal – and what an attempt it was! The hosts came out and continued to press right from the beginning of the second period. The momentum – totally with the visitors until Morecambe reduced the arrears in first-half injury time – swung gradually towards the hosts. I thought that Shaun Miller – with his pace and intelligent running – started to give the visitors problems they struggled to deal with. But it was Cole Stockton’s nice touch which set-up Lewis Allesandra for a brace which he took with aplomb after 52 minutes. At this point, Morecambe were doing to Exeter what the Grecians had done to them in the first half. They had the momentum; they were quicker to the ball and they were playing on the front foot. Perhaps half way through the half, though, the Shrimps took their foot off the gas only to start to dominate again and I thought that City were lucky when one of their defenders, sliding in at his far post, seemed to shovel the ball away for a corner with his arm after about eighty minutes. But the home team can only blame themselves for the decisive moment of the game. This arrived in the 84th minute when that man Nicky Law won the game for Exeter with a routine finish after his Captain had played him in. Simple as that. Morecambe’s heads didn’t drop and I wonder how Aaron Martin felt after the game – he blocked a fierce volley right at the death which could have restored equality with his. Ouch!

I personally thought that Referee Tom Field – who looked fit, was prepared to talk to the players rather than book them and was constantly up with play for a welcome change – had a tremendous match today. He was left with no option during injury time at the end of the contest other than to send Sam Lavelle off for a foul on Ryan Bowman. Sam had already been booked. He will be missed – without him and Steven Old, the Shrimps would certainly have even fewer points on the board than they have so far.

So, at the end of the day, Exeter confirmed their excellent form against Morecambe. They look a slick, smart, decent footballing side to me. Matt Taylor is clearly doing an excellent job with the team off the pitch; Captain Jake Taylor replicates this on it. City found themselves at the top of League Two at the end of the game and on this form, they could expect to stay there. Morecambe recovered from a seemingly hopeless position to give the visitors a bit of a scare – and a real test. On another day, they might have earned the draw which they probably just about merited. The loss left them in eighteenth place.