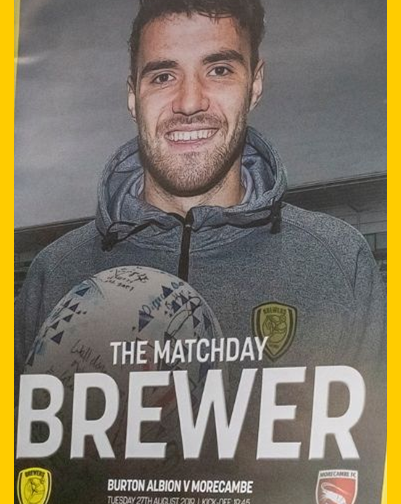 Morecambe travelled to Burton-on-Trent today to visit the Brewers for the first time in four years. The Brewers’ first-ever EFL match during 2009 was against the Shrimps at the Pirelli Stadium and they won this one 5-2. Morecambe have lost six of the twelve previous contests between these clubs altogether and won just four. The last time they met was also a definitive moment for the Staffordshire club: their 1-2 win at the Globe Arena four years ago ensured their promotion to League One. In the last round, Nigel Clough’s side overcame Port Vale away whereas the Shrimps overcame Mansfield Town on their own patch on penalties with just ten men for much of the match.

The preview of tonight’s game on Burton’s own website made interesting reading. Morecambe fans are used to being mistaken for Southend United on a regular basis – an indication of lack of proper research by various commentators and pundits which Shrimpers fans must find as irritating as we do. But never before have I personally been aware of our club being mistaken for a team from Yorkshire:  according to the Brewers’ official site, Jim Bentley was presenting the `view from the Rotherham Camp’. Is Jim aware of this sudden change in his circumstances? – I think someone should tell him, personally.

Anyway, Manager Clough had promised to field a strong side for today’s tie – and he was as good as his word with just one change to the starting line-up from last Saturday: one Liam Boyce. The Brewers played-out a goal-less draw last Saturday at Shrewsbury in a game which will apparently not live long in the memory. At the same time, Morecambe were contriving to lose 2-3 at home to Exeter City after clawing their way back from a two-goal deficit. The Manager said after the game: “I’m really disappointed with all the goals we conceded. The first was poor, the second was criminal and the third was scandalous. There is no doubt they started better than us and we gave them a helping hand with both goals. Momentum and confidence are massive in football; they got on top, our passing was poor, we didn’t get going at all.”

He didn’t point the finger of blame at any of his players but those who witnessed it will not be surprised by the fact that both Andrew Tutte and Jordan Cranston were relegated to the bench tonight – and not brought on at any point. To be fair, though, the team Jimbo chose for tonight was virtually completely different to that which failed against Exeter on Saturday.

One of the three Shrimps players who featured in both games had the first chance of the night. Lewis Allesandra broke into the Burton box during the very first minute to get onto the end of a pass from Cole Stockton but was denied by former Manchester United loanee to Morecambe Kieran O’Hara, who made an excellent save in the home goal. Albion dominated the early possession after this. Stephen Quinn had an effort blocked for a corner after six minutes. Liam Boyce then produced a weak header a minute later. The nearest Burton came to opening the scoring so far was after eleven minutes when Lucas Akins cut-in from the Albion right and Mark Halstead did well to get down low and save his powerful curling shot at the second attempt. Seventeen minutes were on the clock when Halstead had his next save to make: this time, Boyce’s effort was deflected straight to him off a defender’s leg. Although the home team were asking most of the questions, Cole Stockton reminded them that the Shrimps were still in it with a powerful shot from about 30 yards after half an hour. Once again, O’Hara in the Brewers’ goal pulled off a good save. Three minutes later, though, the League One team took the lead. Scott Fraser took a corner and Boyce slipped marker Luke Conlan to head the ball home at the near post. The striker nearly added another after 36 minutes, brilliantly getting beyond two Shrimps defenders before unleashing a powerful effort which was equally brilliantly saved by Halstead. The visiting goalkeeper was forced into action again after forty minutes, this time denying Akins after the Albion man made space for himself, spun cleverly and let fly. It was all Burton as Oliver Ŝarkić narrowly missed the target after forty-one minutes but it looked as if the half was about to end with the hosts just a single goal in front despite their dominance of the play. However, in the second minute of added-on time, John Brayford’s tremendous cross-field pass was picked-up by Ŝarkić, who slid an excellent low cross into the path of Boyce once more and he did the business again at the near post to make it two-nil to Nigel Clough’s men.

The second period started as the first one had ended with Burton on the front foot and Morecambe very much back-pedalling. John-Joe O’Toole got his head to a corner within a minute. Then Akins found himself in acres of space after forty-nine minutes and should probably have done better from Fraser’s pin-point cross: instead, he headed weakly at Mark Halstead. Two minutes later though and Albion were three-nil up on the night. Brayford marauded down the Burton left and slung over another superb cross which Ryan Edwards converted at the near post again to register the Australian’s first goal for the Brewers. Allesandra’s attempt to reduce the arrears from a free-kick after 55 minutes went over the bar. His cross was then headed narrowly wide by Kevin Ellison after 66 minutes. Three minutes later, Lewis made his own luck again with a smart run but his effort was saved low down by O’Hara’s outstretched leg: it was a tremendous bit of improvisation by the young Irishman. Down the other end, though, Boyce reserved the match ball for himself when he was quickest to react to Halstead’s fine save from a header by Akins and nodded the ball home with ease. Quinn narrowly missed with a long-range thunderbolt after 81 minutes and although they had to play the last few minutes with only ten men after Colin Daniel limped from the field at a point when they had no substitutes left, Burton won this game at a canter.

Regardless of how disappointing this result – which could have led to a cash-spinning tie with one of the Big Boys of English football in the next round – may be, however, we still have certain blessings to count. At least we still have a club to support. The same can also be said for Burton, whose progressive approach to football in the Twenty-First Century includes very enlightened policies such as this:

“The club has a number of wheelchair bays available for away supporters. The away disabled wheelchair bays are situated in front of the East Terrace Stand. Wheelchair users and ambulant supporters who are in receipt of higher disability allowance are entitled to have a carer accompany them to the Pirelli Stadium free of charge.”

Fair Play to them: not many EFL clubs are so well set-up – or welcoming – to away fans with mobility issues. As we all know though, not all fellow EFL clubs have been so well run in recent times and for some of these, their pigeons have well and truly come home to roost today. Imagine, for one moment, how fans of Bolton Wanderers and Bury must be feeling tonight. They woke up this morning with the hope that their two clubs (with 256 years of Football League membership between them) would have some sort of future tonight. Who would swap with them at this moment? I heard James Frith, the local Labour MP for Bury North on the radio earlier today. He angrily denounced asset strippers for ruining the financial situation at Bury (a place which the current owner Steve Dale has admitted he could not find on the map at the time he bought it for one pound). He also blamed the EFL itself for the demise of the Shakers for failing to carry out genuine due diligence as far as ownership of the club is concerned. Bury’s probable imminent demise and the problems besetting a seemingly doomed Wanderers are both sobering thoughts for any football club supporter anywhere.