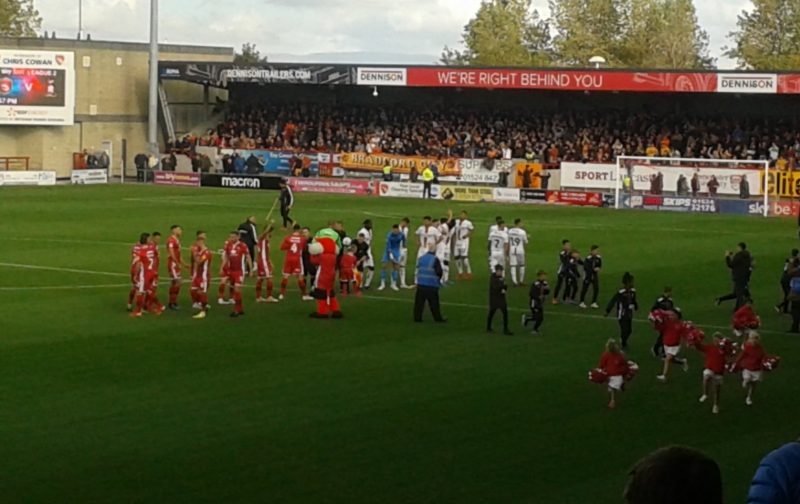 Old rivals Bradford City visited the Globe Arena today for the first time in a while, bringing with them a player who will not have fond memories of his experiences with the Shrimps at Christie Park earlier in his career. Clayton Donaldson was York City’s outstanding player in the Football Conference Play-Off semi-final against Morecambe during 2007. He was flattened by Shrimps’ goalkeeper Steven Drench during the first half in a collision which saw Steven carried from the pitch with a dislocated elbow: the impact didn’t do Clayton any favours either. Controversially, the referee chose not even to book Drench, let alone send him off – a curious decision at the time to say the very least. York scored to put themselves ahead in the tie from the resultant penalty but two wonder goals from Wayne Curtis saw Morecambe finally victorious – and the rest is history as they say… (Er: they went on to beat Exeter City at Wembley and enter the Hallowed Ground of the EFL.)

Wayne scored again in the final game Donaldson played at Christie Park. On this occasion, Barry Roche brilliantly saved Clayton’s penalty at a point when Andy Parrish had been sent off for fouling him. If he’d scored, Crewe would have gone 1-4 up against the ten-man Shrimps. In the end, his team lost 4-3 (with several levels of irony, current Crewe Manager Dave Artell scored the winner for Morecambe during injury time). So one player at least would have very good reason to get the better of the Shrimps today. Having said that, I thought the way he bared his backside to the massed ranks of Shrimps fans in the old North Stand who had been daring him to do precisely that en masse for ages during the Crewe game was one of the funniest things I have ever seen at a football match. Fair play to him for his tremendous good humour: it’s just lucky that the Referee clearly didn’t see what he did…

Gary Bowyer’s team arrived at the Globe on the back of three wins, one loss and a draw from their last five games. As far as Morecambe are concerned, the Bantams had won seven of fifteen previous meetings and lost four. City were sixth in League Two before the game and hoping for a rapid return to League One, from which they were relegated last season.

Compare this with Morecambe. Jim Bentley’s team have lost three and drawn two of their previous five league fixtures. In the campaign so far, they have won just one of their twelve games altogether. This explains why only Stevenage lay between them and the oblivion of the National League before kick-off today. So – on current form – there was only going to be one winner. The Bantams are a big club from a large city. Their average home crowd is over 14,000 and the fact that they sold-out their allocation for this fixture almost two weeks ago (more tickets at over 1600 than Morecambe’s average home gate) speaks volumes about the enormity of the gulf between the day-to-day realities of these two clubs. (In reality, lots more than the official gate from Bratfud were in the ground. About eight people sitting adjacent to Yours Truly were clearly Bantams supporters and I spotted more than one Bradford shirt hidden under over-clothing as people streamed away from the Morecambe end at the end of the match. But we must remember that the town was known as Bradford-upon-Sea due to its direct railway link to the West Yorkshire city years before it was re-named after the adjacent Bay..,)