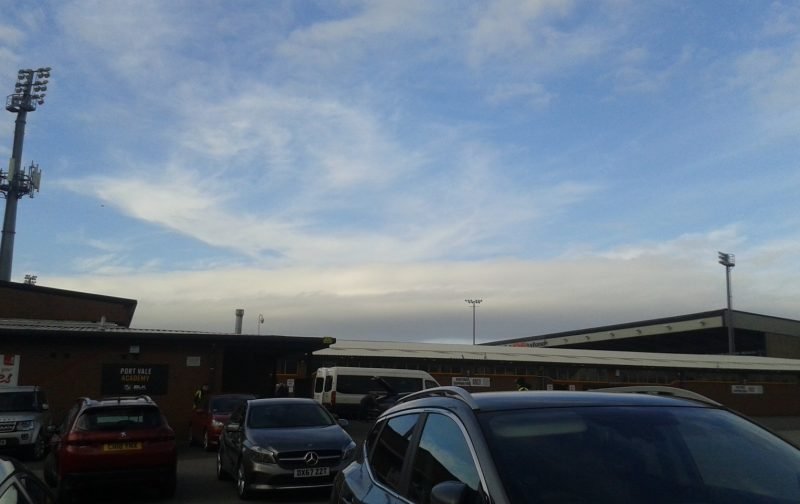 Cranston in a Pickle at Vale

Kevin Ellison has been rightly lauded for openly discussing the mental health problems he has suffered from in the past. So it’s only fair to acknowledge the honesty of Port Vale opponent Cristian Montano and the demons he has personally experienced which he has shared with everyone via Twitter this week. Life is about a lot more than football and it’s important to repeat Cristian and the mental health charity Mind’s message to one and all: “It’s OK not to be OK.” World Mental Health Day is next Thursday.

Last time Morecambe visited Tunstall, they found themselves in a similar position to the one they are in currently: near the bottom of League Two and struggling. On that day, a miraculous display by goalkeeper Mark Halstead (which included saving Tom Pope’s penalty) and a debut goal by Aaron Collins (who was set-up by Carlisle loanee Richie Bennett, who was warming the substitutes’ bench for Vale today) allowed the Shrimps to escape from Vale Park with three points. Today – in twenty-second position and with a record of two draws and three losses in their last five league matches – Morecambe were hoping for the same sort of change in fortunes which was kick-started by their win last February. In previous meetings, the Shrimps held the upper hand with seven victories; four draws and five losses in all competitions. The Valiants, on the other hand, were in fifteenth position at the start of the game and on a run of one win, two draws and two losses in their last five EFL games. Significantly, though, they have yet to be beaten at home in the league this season.

John Askey’s team were under a bit of a cloud following a melee during their 3-3 draw at Leyton last Saturday, however. Defender James Gibbons took exception to what he saw as a dive by an opponent which led to about a dozen of the men on the pitch exchanging handbags and three of them being booked, including Gibbons himself. With a name like his, it would be a commentator’s dream come true if he were to stamp on someone – Another One To Add To The Album – wouldn’t it? (Even if not so good for the person on the receiving end of the foul, admittedly…) Both Vale and Orient are thus subject to an FA charge for failing to control their players.

But would they behave themselves today, though?

Will Atkinson went straight into Port’s starting line-up after being re-signed for the club earlier this week: his last game for the Valiants was as long ago as 6th November 2007. Morecambe also had changes in their line-up to the team which ground-out a 2-2 draw against Northampton last week. With Aaron Wildig injured yet again, Luke Conlan also not available and Andrew Tutte not in the squad, Adam Buxton, Jordan Cranston and Tom Brewitt started.

It was dry but grey as the game kicked-off and it was quite an even contest during the opening period with Vale searching for an opening and the Shrimps playing quickly on the break. Neither goalkeeper was called into action until the eighteenth minute. Then, John O’Sullivan received a pass on the edge of the area from Lewis Allesandra, looked-up and curled a perfect shot over Scott Brown into the top corner of the home net from all of twenty-five yards out to put the visitors into the lead. It was an absolutely sublime strike and it was also John’s first goal for the Shrimps. Two minutes later, Adam Buxton also tried his luck from a long way out when prompted again by Allesandra but his shot missed the target, albeit narrowly. The hosts had the next chance after twenty-two minutes. Luke Joyce was played through and bore down on the Morecambe goal but Barry Roche stretched his huge frame to deny him at the cost of a corner. The visitors were continuing to hold their own when a potentially pivotal moment in the game arrived after 32 minutes. Then, off the ball and with little or no provocation, Jordan Cranston chose to try and kick one of his opponents. It was a pointless, stupid and completely irresponsible bit of petulance for which Cranston was rightly sent off. Jake Taylor almost immediately tried to take advantage of their opposition’s sudden loss of numbers when Nathan Smith fed Luke Taylor whose shot was pushed away for a corner by Big Baz with thirty-six minutes played. As the home team started to dominate possession, Will Atkinson and Leon Legge both missed the target with shots but John Amoo should have equalised for the Valiants in injury time at the end of the first half. Having had a shot blocked after forty minutes, Amoo was found by David Worrall with a precise cross which he headed over the bar. Morecambe breathed a collective sigh of relief and headed back to the Dressing Rooms with a precious lead under their belts.

With Richie Bennett on as a substitute for the hosts, it took Vale only four minutes from the re-start to bring the game level again. The visitors failed to clear a corner effectively and the ball found its way to Joyce who fairly hammered it back where it had come from past Roche into the back of the net. It was a tremendous strike with which to open the ex-Accrington Stanley man’s account for his new employers. It was all Vale after this for quite some time.  With almost an hour on the clock, Worrall played his way cleverly into the Shrimps’ penalty area, exchanged passes with Tom Pope and tried to place the ball past Baz only for the Morecambe goalkeeper to make an outstanding save with his legs to keep him out. Another goal seemed inevitable and it duly arrived after sixty-eight minutes. Worrall beat Buxton to the ball on the wing and chipped a lovely cross which Captain Pope placed out of Baz’s reach with a beautifully guided header. The home team got the ball in the net again after 77 minutes but it was chalked-off for a foul in the build-up. With just three minutes scheduled to play, Buxton made another mistake in the Morecambe area, allowing Bennett to dispossess him and then feed Pope to double his tally for the day with a coolly-taken shot. And that was it. Once Cranston got himself sent off, there was only one team going to win this one.

So, to answer the question posed earlier, Port Vale did behave themselves today. That’s more than can be said for one of their opponents. Jordan Cranston’s utterly brainless action after only half an hour let down his Manager, his team-mates and the one hundred and eleven Morecambe supporters who had paid their hard-earned money to travel all the way to the Potteries today. He should be ashamed of himself. Morecambe were looking good for a precious and rare away win at the moment he allowed the Red Mist to descend. His crass stupidity led to the Shrimps losing yet again and this evening, only Stevenage (who emulated Morecambe by losing from a winning position away from home) lay between them and the very bottom of the EFL. Vale, meanwhile, maintained their unbeaten home record and moved up to tenth spot in League Two.

One Reply to “Port Vale 3:1 Morecambe”