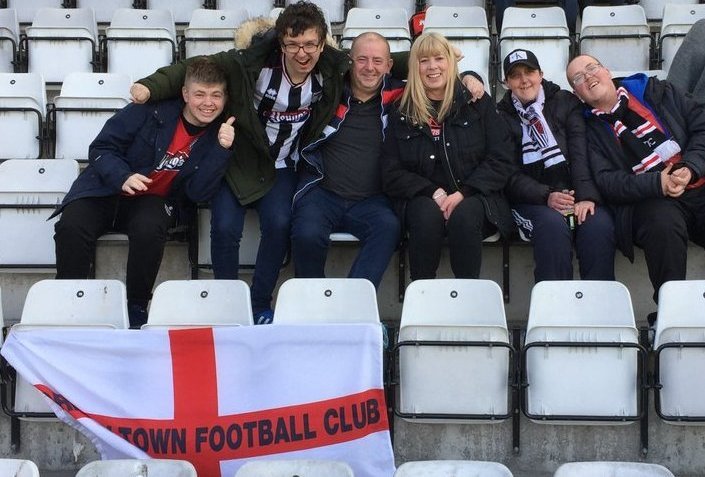 Mariners Jolleyed Along to Safety.

Grimsby travelled from the East to the West coast of England today seeking to reverse the loss they suffered late last September at Blundell Park against Morecambe. On that occasion, only a magnificent display from goalkeeper James McKeown kept the Mariners in the match. Even though they led at half time, Grimsby were unable to hold back a Shrimps team playing on the front foot throughout and they finally lost 1-2 thanks to goals from Rhys Oates and Liam Mandeville.

The two clubs have met several times in various competitions but in League Two, Morecambe have won five of their eleven games with four of them ending in draws. Since September, Town Manager Michael Jolley has seen his team play completely unpredictably, beating the top of the table teams one minute and then losing at home to Macclesfield the next. From looking like relegation candidates during October, he took his Lincolnshire team to a position during December 2018 when the Mariners won every game they played: four in League Two and away at Chesterfield in the FA Cup. In January, though, they won their first game and then lost their next five. So it has been a topsy-turvy season so far for the men in the black and white stripes and they arrived at the Globe Arena today having lost three and drawn two of their last five games. Despite this, they were in seventeenth position in League Two: two places and three points better off than today’s opponents. Morecambe, on the other hand, have won two and only lost one of their last five games and were searching for their fourth successive win at home. Before the game, Manager Jim Bentley said:

“We are going all out for a win because I want us to keep the home record going. Three points would be massive and hopefully end all talk of us being sucked back into the relegation fight while also taking us closer to the sides currently above us which include Grimsby and Cheltenham, our next two home opponents.”

It was a very similar day to the one last September when the two clubs last met: sunny but with a biting wind whistling in from the sea. Almost straight from kick-off, Liam Mandeville chanced his arm for the hosts but his effort from about 35 yards just missed the target. Piero Mingoia made good progress down the Morecambe right after a quarter of an hour but Kevin Ellison volleyed the cross which resulted over the bar. Nineteen minutes had been played when Sebastian Ring found Charles Vernam, whose powerful header was brilliantly pushed over the bar by Captain Barry Roche in the home net. The visitors had another half-chance a couple of minutes later but Martyn Woolford’s strike was just off target. A couple of minutes later and Big Baz excelled himself again, using his legs to block another dipping, swerving effort from Joe Grayson, this one from quite a distance. With just over a half an hour on the clock, Vernam tried his luck from the edge of the penalty area but Roche was again equal to it. At the other end, the visitors’ Captain Danny Collins then did well after 34 minutes to block a screamer from Richie Bennett. Then Mandeville set-up Aaron Wildig a couple of minutes later but his shot went just wide of the target. The play swung back towards the Morecambe end immediately and Vernam played a low cross to Grayson at the back post but his show from a really promising position flew over the bar.

So it was all-square at half time after a lively and entertaining match so far. The fare in the second half was nothing like as good, however, and a lot of the play was scrappy and ineffectual. There was little to report except the return from long-term injury of Vadaine Oliver as a substitute for the Shrimps: he played the last half hour. The key moment of the half – and the match – arrived in the eightieth and eighty-eighth minutes. Firstly, Referee Scott Oldham adjudged James McKoewn to have brought down substitute Aaron Collins and he picked himself up and put the ball past the visiting goalkeeper to put the Shrimps one-nil up. Michael Jolley then shuffled his pack and the Achilles Heel which has affected the Shrimps all season struck again with just two minutes still scheduled to play. Harry Davis made good progress down the Grimsby right, played an excellent cross into the box for Kristian Dennis to head it back where it had come from and Vernam to smash it home to equalise. That was it: Town avoided a further defeat and the Shrimps yet again indicated that they collectively lack the nous to hold onto a winning position.

The draw makes the visitors technically safe this season from the drop. In truth, Grimsby deserved it. For Morecambe, this disappointing result means that they could still be relegated, at least as far as the maths are concerned. Elsewhere, though, the teams right in the mire at the bottom of the EFL all lost: Macclesfield 2-0 at Forest Green; Notts County 3-0 at Crewe and – critically – Yeovil failed at home against fellow-strugglers Crawley by the only goal of the game. So it could have been a lot worse. The two teams thus remain exactly where they were before the contest: in seventeenth and nineteenth place respectively.

After the game, Jim Bentley made the point that comments made to him by a minority of home fans today had really got under his skin. He suggested they should look at Notts County and other `Big Clubs’, see where they are and then consider the position the Shrimps find themselves in tonight. Amen to that. Jim has worked miracles yet again and the team is all but safe for yet another season of punching against their wait. Well done to him again.

Just a word for last week’s opponents Macclesfield as well. Sol Campbell’s men came from behind twice to beat Exeter during mid-week to make it six games unbeaten but – far more significantly for them – put themselves clear of the relegation zone for what I think is the first time this season. They remain there tonight. Well done to them and congratulations also to Lincoln City – promoted today – who are the best team I have personally seen in League Two this campaign.