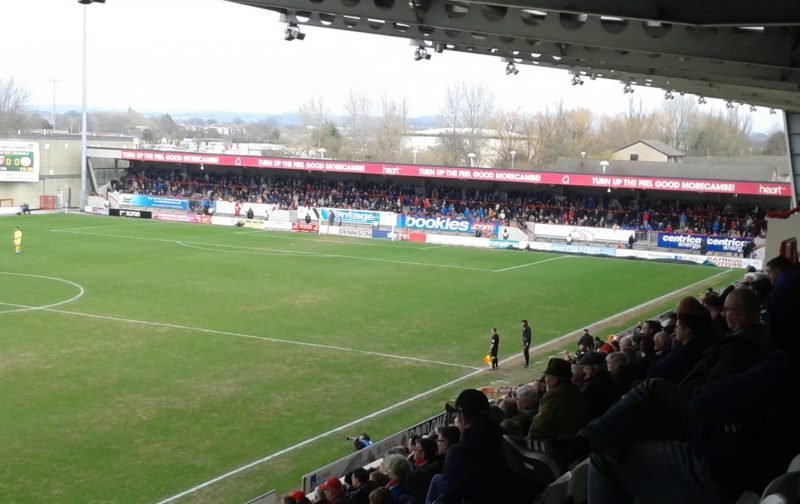 Crawley Town made the long journey from West Sussex to the Globe Arena today to face Morecambe in a game which could have a pivotal bearing on the final standings in League Two with only seven games still scheduled to play. The visitors arrived in eighteenth position: their hosts were just one place and a single point behind them. Town, however, had won only one game in their last nine: the Shrimps have won four out of their last ten.

Crawley Manager – sorry – `Head Coach’ Gabriele (Gaby) Cioffi – took over when Harry Kewell was prised away from the club for a short and ill-fated stay at Notts County at the end of August last year. He showed severe frustration when interviewed yesterday and is clearly irked by some of his own players’ attitudes as far as his team’s poor form is concerned. Regulars Jimmy Smith (injured knee); Josh Doherty (hip) and Luke Gambin (thigh) were all missing today along with suspended Ibrahim Meite and One Other.

It’s probably never a good idea to publicly criticise your own men but the Italian slated the ankle injury keeping perhaps the club’s outstanding performer Josh Payne out of the clash against Morecambe as `silly’. Before the match, he reeled-off a succession of similar `silly’ injuries and made his displeasure about them all too obvious. Concerning the midfielder who was in the starting lineup against the Shrimps, he said:

“We lost Filipe Morais for eight games for surgery on his finger. This is the first time I have heard of this in football – he is not a Rugby player.”

Oh dear – trouble at t’Broadmill. Ok: Broadfield. All right: trouble at The People’s Pension Stadium, then. (Really trips off the tongue, doesn’t it?)

In terms of previous games, history was statistically absolutely identical: three games won, lost and drawn by both teams in League Two.  Crawley, though, had been victorious in both previous contests in Lancashire and beat Jim Bentley’s team last September at home as well. But the really bad part of the Curate’s Egg as far as Town are concerned also happened at the Globe Arena where a team managed by Charm School Drop-Out Steve Evans lost 6-0 during 2011 at a time when Town were top of the League: this remains their record defeat ever in the EFL.

Morecambe were hopeless last time out at Swindon last Saturday, where they were soundly beaten 4-0. They weren’t much better the week before, when they played poorly against seemingly doomed and even more hopeless Notts County at Meadow Lane. But their last two home games – where they won with really positive performances against strong teams – augured well. So which Shrimps team would turn-up today: the negative and tentative one which capitulated at Swindon last week? Or the dynamic one that played on the front foot and convincingly beat Forest Green and the AFC Wimbledon impersonators earlier in the month?

For whatever reason, the away end was opened-up to home supporters today, as shown in the cover photo. This doubtlessly created a far better atmosphere than is usually the case at the Globe Arena. It was sunny as the match kicked-off but the clag lying on the hills far away gradually crept ever westwards and finally enveloped the ground and its surroundings in dullness. On the field, though, it was anything but dull. The visitors made it clear right from the off they were not interested in a draw and took every opportunity to play on the break: if they were not actually performing for their increasingly beleaguered Coach, there was absolutely no sign of it in the display they turned-in here. In Ollie Palmer, they had a big, lumbering centre forward in the old fashioned mould who caused the Shrimps’ defence problems all afternoon. I almost felt sorry for him – as our own Vadaine Oliver has done in the past – he was always a handful in the air and held the ball up well but had nobody to help him out as he ploughed a lone furrow up-front a lot of the time. Their number seven, Reece Greco-Cox, could clearly play a bit too and Lewis Young (Ashley’s brother) at left back impressed with his attacking prowess particularly during the second half. Out on their left wing, the contest between Ash Nathaniel-George and Zak Mills was the highlight of the half for me. Young Ash obviously has oodles of talent but Zak had him in his pocket nine times out of ten. After 20 minutes, indeed, the visiting winger showed his frustration by signalling to his team-mates to provide him with some options – and in that moment, Mills was in again. Ironically, though, it was Nathaniel-George who forced the first save of the game from returning Morecambe custodian Barry Roche. This was after 22 minutes and Big Baz did well to get down low to save a shot from the centre of his penalty area. Crawley came even closer with half an hour played: big Palmer headed the ball up into the air and Greco-Cox – with his back to goal – produced a tremendous bicycle kick which bounced off the top of the crossbar on its way over. Up the other end, Richie Bennett held the ball up well after eight minutes and cleverly feinted one way and then the other before setting-up Aaron Wildig for a shot which went well over the bar. After a quarter of an hour, Baz hoofed the ball the length of the pitch to Aaron Collins who managed to get away from Joe McNerney only for Tom Dallison-Lisbon to make a last-ditch clearance for the visitors. Rhys Oates forced Glenn Morris into a save for Crawley almost at the death, making a trademark run down the Morecambe left and hammering the ball on target. But the last word fell to the visitors: Palmer made a brilliant turn which created space for himself and then let fly with a shot which the Shrimps’ defence deflected for a corner. So it was all-square at half time, with the visitors shading it so far at least in terms of possession.

The second half was a scrappier affair. I thought that the visitors again shaded the play early doors and feared what might have happened had they brought their shooting boots with them. Their approach play was faster and more accurate than their opponents’ and a lot of the game was played in the home half. The Shrimps huffed and puffed but their possession usually broke down as soon as they crossed the halfway line.  Richie Sutton looked knackered to me long before he was taken-off and enthusiasm alone is not enough as far as Oates is concerned. But Jim Bentley replaced them both around the hour mark and their replacements – notably Liam Mandeville – totally changed the nature of the game. For the first time, the home team looked like they might have some sort of a cutting edge. Mandy has the lot – apart from possibly commitment on occasions – and he showed it from the moment he was unleashed. Suddenly, there was real pressure on the right-hand side of Town’ defence as Liam danced through it but he also had the apparently effortless awareness to link his team-mates into the play. After eighty minutes, he forced a good save from Morris but just a minute later, the pivotal moment of this match arrived. Mills worked his way down the Morecambe right yet again and slung over a perfect cross which an unmarked Mandeville headed past a goalkeeper who had no chance at all of saving it. To be fair, the visitors didn’t give up after this mortal blow and Morecambe’s Game Management – as I believe we have to call it these days – was poor at times. Late substitute Kevin Ellison (who, with Dannie Bulman on the other side, made it two over-40s on the field today) had a golden opportunity to double Morecambe’s lead in injury time but – with better options on both sides of him – contrived to miss the target altogether.

At the end of the day, however, it didn’t matter: his team already had all the points. At this stage of the season, that’s all that really matters.

Elsewhere today, next Saturday’s opponents Macclesfield pulled-off a very commendable draw at League Two leaders Lincoln. Cambridge and seriously troubled Yeovil both lost at home. Port Vale won away from home to ease their relegation worries but – astonishingly – Notts County showed that there is still life in the old dog with an extraordinary 0-3 victory away at Stevenage.  Morecambe found themselves nine points clear of the Drop Zone tonight, having swapped places with their visitors in order to end the day in eighteenth position in League Two.