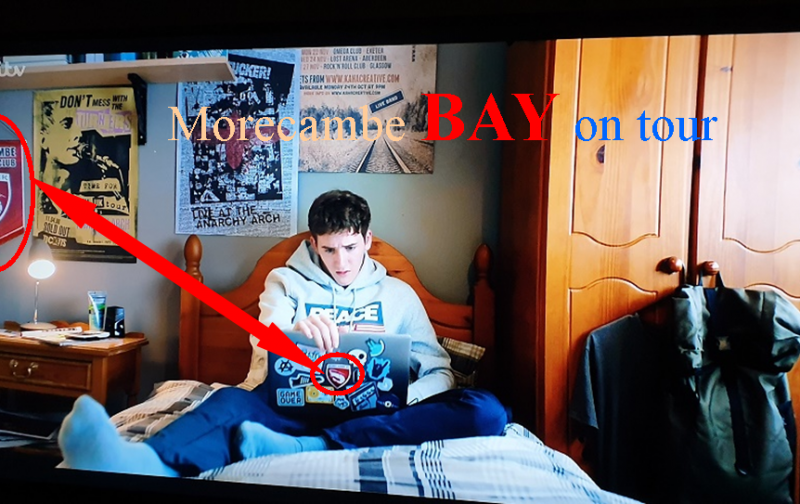 On the Road with the Bay.

If you were a native of Morecambe, what would you do today? Get out of the house in order to meet   Labour Party and Opposition Leader Jeremy Corbyn in person? (He was pressing the flesh today in a town which, very sadly, his own Twitter feed described as `Morecombe’. Oh dear.) (Picture 1: Morecambe? Definitely. But Wise? Who can say?) Or watch – possibly for the millionth time – saved versions of ITV’s latest crime drama The Bay (to see if you; your car; your house or whatever else is actually featured in it might involve you in one way or another). Or get down to the football club at the soon be rechristened Cavendish Arena very early on and then head south to Swindon? (The Globe isn’t going to be re-christened: this is speculation based on a non-existent pub and area of the town referred to in the Bay…)

If you had, it would be to reduce two words (Robin Hood) relevant to last Saturday’s bore-draw in Nottingham for just one in Wiltshire: Robin.

So what of the Robins?  Off the field, the club has enjoyed both largesse and fans’ influence that Shrimps fans can only marvel at. Just like Morecambe’s neighbours Lancaster City, Swindon Town have always played on a ground actually owned by the local council, to which they have paid rent. But just last Thursday, Swindon Council actually agreed to sell the freehold of the County Ground to a consortium directed by the club’s own Fans’ Trust.

What are the chances of Lancaster City Council buying-out the current owners of our club and then selling it to the fans who not only support Morecambe but also the Local Authority on which their tax contributions actually depend?

Well – what do you think?

On the field, Town started the month with a convincing 3-0 home win over Colchester United. After that, though, they lost at Carlisle and Stevenage and were only able to draw at struggling Port Vale last Saturday. They were lucky Thirteenth in the League Two table prior to the game. Their relatively new manager Richie Wellens said during the week that Town’s current chief failing is in the attacking third of the field (which, come to think of it, is the main problem ALL football teams face, isn’t it?):

The Shrimps’ form during March, however, had been almost diametrically opposite to today’s opponents: they lost their first game this month at Yeovil but then won the next two and drew the last one. This was last Saturday when they played their part in a dismal game of absolutely appalling quality and no goals at Meadow Lane.  So what would the visitors do today? Play for a draw, stay on the back foot most of the time and waste time at every conceivable opportunity as they did last time out in Nottingham? Or go for it, all guns blazing, as they had done in the previous wins over Forest Green Rovers and the team from Milton Keynes? Talismanic midfielder Aaron Wildig – missing last Saturday – was back in the starting line-up for Jim Bentley’s team today, as were Rhys Oates and long-term injury victim Sam Lavelle.

History has not smiled kindly on the Shrimps as far as this fixture is concerned. In six previous clashes, the Robins had won their only cup meeting and only dropped only a single point in all their league meetings. Furthermore, they won the reverse fixture last September at the Globe by the only goal of the game even though they were playing with just ten men for part of the match.

It was dry and quite bright as the game kicked-off. Virtually immediately, Town lost the ball and Richie Bennett attempted to increase his tremendous scoring form with a shot which was blocked by back-pedalling Dion Conroy. But the shape of the play was soon established. Swindon – with Danny Rose notable with his prompting from midfield – began to dominate and Morecambe played on the back foot. They didn’t help themselves after nine minutes when the Shrimps defence couldn’t clear the ball after a corner; Alex Kenyon inexplicably played the ball into the danger area and Theo Robinson finally took advantage of the visitors’ confusion by heading a bouncing ball past Mark Halstead. Just three minutes later, Town could and should have gone further ahead. Ali Koiki cleverly chested the ball down within the six-yard box to set-to Keshi Anderson. But Halstead somehow managed to keep his resultant shot out of the net with a truly magnificent save: using his leg to block it as he was actually going the other way. Down the other end, though, Bennett dispossessed a Town central defender and cleverly played-in Aaron Collins to be one-on-one with Luke McCormick in the Robins’ net after eighteen minutes. The loanee from Carlisle United tried to take the ball around the goalkeeper but McCormick did just enough to palm the ball away and then Luke Woolfenden blocked Bennett’s effort from the rebound. Kenyon blotted his copybook again after 34 minutes with a bad foul on Kyle Bennett for which he was possibly lucky only to get a yellow card. With the team in the all red strip still in the ascendency, it was no surprise when they went further ahead with just four minutes scheduled to play before half time. Kaiyne Woolery finished-off a good move initiated by Rose and carried on by Anderson by beating a Morecambe defender and smashing a wicked shot past Halstead at his near post: maybe the visiting custodian should have done better. Bennett forced an excellent save from McCormick with a bullet header just after the second goal and Steven Old had another header saved from a corner in the dying embers of the half but Swindon found themselves two-nil up at the end of it – and good value for it they undeniably were. No wonder Jim Bentley was shaking his head as he trudged back towards the Changing Rooms at half time.

Would it get better in the second half for the Shrimps? In a word: no. Collins set-up Piero Mingoia for a shot which went over the bar early doors and then the same player took a free kick with just over an hour on the clock. Old headed the ball down for Aaron Wildig to connect with it but McCormick was equal to his effort in the home goal. But Swindon Captain and Centre Half Dion Conroy showed everyone how it should be done after 65 minutes: his tremendous shot after a clever turn and feint curled out of Halstead’s reach into the top corner of the net to give the hosts an all-too-comfortable lead. It got even worse when Swindon’s Bennett beat Halstead with a shot from a long way out which seemed to bounce over the diving goalkeeper’s outstretched arms after 81 minutes. And that was basically it. This was far too easy a win for the Robins. With probably near to their strongest line-up, the team from Lancashire didn’t ever give Town a proper game today. My sympathies go to the 98 people from Morecambe who made the long journey to Wiltshire to witness this weak display: it always seems much further on the way back when you’ve been soundly beaten. Elsewhere, other teams’ performances didn’t necessarily help the Shrimps as they stayed in nineteenth position in League Two. Port Vale and Notts County both lost again at home and Yeovil were beaten away but Cambridge and Port Vale both drew. So the Shrimps are still far from safe. If they play as poorly as they did today from here on in, they are still far from out of the mire at the bottom of the EFL. The win gave Swindon yet another double over Morecambe and pushed them up to tenth in the division.