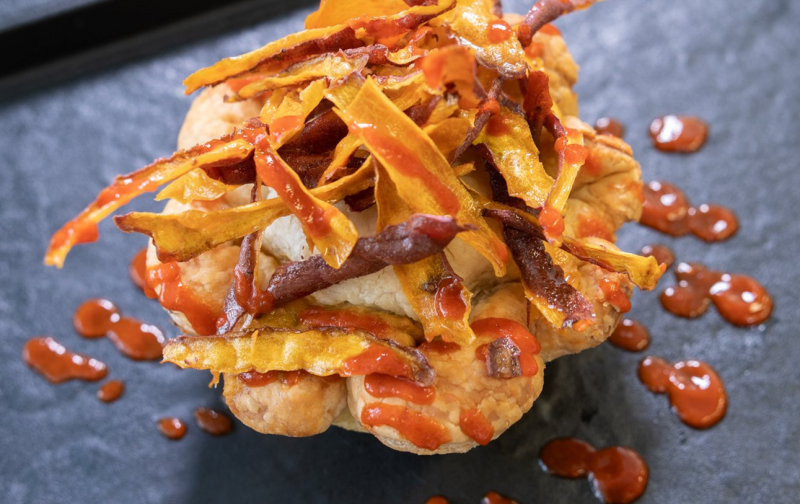 When was the last time you saw Forest Green Rovers on the telly? Saturday night/Sunday morning on Quest? Possibly. Last time I saw them was late on Sunday night when they filled a large part of a programme about the effect of Veganism on footballers in this country: Jermaine Jenas investigates Football Going Vegan. Fascinating – look it up on Sounds if you didn’t see it at the time. The only thing young Jermaine chickened out of (no pun intended) was showing what actually happens in poultry processing plants and slaughterhouses in this country. If we can eat the results, surely we should be able to see the processes involved (Halal slaughter for instance) in getting these things onto the supermarket shelves in the first place, shouldn’t we? (If you want to make the sweet-pea pie shown here, go to https://www.fgr.co.uk/news/june-2019/recipe-sweet-pea-curry-pie)

Fancy that – a football club which also produces fantastic recipes. Wow. Imagine that happening here at stuck-in-the-mud albeit prize-winning pie makers Morecambe. In my experience, the fare is simply meat knocker, gravy and peas; take it or leave it. Or hot Bovril. There’s not even a vegetarian option – let alone a Vegan one – in the bit for plebs at the Globe Arena which I always inhabit. Isn’t it time we entered the Twentieth Century – let alone the Twenty-First?

Whatever, the only Vegan club on the planet visited the Globe Arena tonight on the back of two wins, one draw and a single loss in their last five League Two games. Mark Cooper’s team were in sixth place in the division before the match and were looking to pick-up further points to improve on last season’s performance, where they ended-up in the Play-Offs only to lose to Tranmere Rovers. Their better-known players such as Reuben Brown and Reece Brown have moved to Pastures New (or should that be bigger New Lawns?) On Saturday, though, Morecambe old boy Aaron Collins scored his third goal in four games for FGR and Shrimps’ fans would be hoping that he would not find the net again against a club who re-started his football career just a year ago at a time when it had completely stalled.

Morecambe, on the other hand, were celebrating the fact that what was only their second league win of the season at Colchester last Saturday saw them escape from the icy tentacles of the National League Octopus to see Stevenage slip back to the rock bottom of the EFL by a single point. In past meetings, Morecambe have had the best of previous encounters in all competitions (according to the FGR website, thirteen wins out of twenty-three previous games; five draws and five losses). Most recently, Aaron Collins set-up one goal and scored another in the Shrimps’ 3-0 win over FGR at the Globe last season, when they also won 0-1 at Nailsworth with a goal from Aaron Wildig. Altogether, they have beaten Rovers twice; drawn once and lost only their first encounter at the New Lawn in League Two before tonight.

It was windy, overcast and thus very dark by the North Lancashire coast as the game kicked-off. Rovers must have won the toss because they elected to change ends at the start. In front of a relatively sparse crowd, the first half was played much like a practice game. You could hear the players shouting to each other and a lot of the play was pretty scrappy and shapeless. After two minutes, following good approach play, Lewis Allesandra attempted a volley from the edge of the FGR penalty area but got over the ball and sent it sailing above the bar. At the other end, Carl Winchester sent an even wilder shot over the Morecambe bar with ten minutes played.  Two minutes later, a Rovers defender played a suicidal back-pass back to his goalkeeper and Joe Wollacott did brilliantly to deal with it. Fourteen minutes were on the clock when Cole Stockton controlled the ball brilliantly and played -in strike Partner Allesandra who beat Wollacott only to see Liam Kitching kick the ball away from just In front of the goal line. Eighteen minutes had been played when Stockton again controlled a header from Kevin Ellison really well and just missed the FGR right-hand post with a low shot. The visitors had plenty of the ball and forced three corners alone during the twenty -seventh and twenty-ninth minutes but they failed to make any impact with them. The nearest they came to force Barry Roche into a meaningful save was right at the end, when Ebou Adams headed a corner over the bar. Quite a long way over at that. It was at this point – according to the FGR Twitter feed – that the taker of the corners, Joseph Mills, yelled at his colleagues: “Attack the ball!” But they didn’t. So the half meandered to an end with few chances and even less excitement.

The second half was also a curiously muted affair. The visitors had even more of the possession (three more corner kicks by the fifty-second minute for instance – as opposed to none for Morecambe during the entire match) but never really did anything with it. However, the sheer weight of possession means that a goal becomes more rather than less likely and one duly arrived as the game seemed to be drifting towards an inevitable bore draw. It was the most bizarre of strikes: FGR forwards took it in turn to shoot; Morecambe defenders took it in turn to block these efforts but the last one – by substitute Jack Aitchison  apparently – was deflected and rolled agonisingly to the left of Big Baz in the Shrimps’ goal with the big goalkeeper completely wrong-footed.  This was in the seventy-fourth minute. Another pivotal moment in the match had been reached about five minutes earlier when Referee Matt Donohue booked Lewis Allesandra for a fairly innocuous forward’s tackle on Winchester. In injury time, Lewis was sent off for another relatively minor infringement.  Having watched Dom Barnard reacting really badly to a shove from Stockton and then roll about as if pole-axed when fouled by Alex Kenyon in the first half and seen Mathew Stevens clearly dive in the penalty area after about an hour, you really wondered by which rules the referee was judging the game. Neither of the Forest Green players was even booked. However, with a man short and at least some attempt by the Shrimps to pull back a losing situation, the game was well and truly wrapped-up by Liam Shephard in injury time when he raced up the Forest Green right and unleashed a tremendous shot which beat Baz all ends up to give the visitors a probably just about deserved win. The three points pushed the Vegans into third place in League Two.

Elsewhere, Stevenage also lost by the only goal at Swindon, thank goodness – and thus remained bottom of the EFL with Morecambe precariously placed just one position above them. Next Saturday, the two bottom teams meet at Broadhall Way.

Six-pointer? Is it possible to be more than that? At this moment, it begins to feel very much like it…