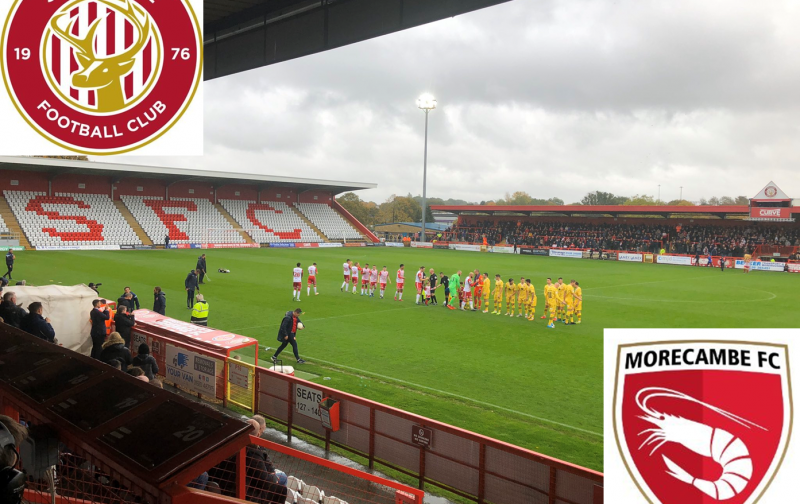 It’s still only October but today’s clash at Broadhall Way – or Lamex Stadium if you prefer -between Stevenage and Morecambe already had something quite doom-laden about it. Here we have the two worst teams in the EFL about to slug it out to see which one of them would be wearing the Dunce’s cap by the end of play; who could be the Lamest at the Lamex if you like. Before kick-off, Boro – under the tutelage of Mark Sampson (who left his previous job as the coach of the England women’s football team under something of a cloud, to put it mildly) – were absolutely bottom of the pile with just one win in fifteen games so far and nine points on the board. Their recent record was that solitary win, two draws and two losses from their last five League Two games. The Shrimps, on the other hand, had two wins to show for their efforts so far this season. They came into this game on the back of one win, one draw and three defeats during their last five contests. They have a worse goal difference than anyone else in the division and the historical omens as far as this fixture is concerned were also against them. In twelve previous encounters, Morecambe have only won one and lost a whole seven. Last season, the team from Hertfordshire also did the double over today’s opponents.

Last Saturday, whilst Morecambe were winning at Colchester, Stevenage managed to claw-back a point at Port Vale from a losing position. On Tuesday, as the Shrimps lost tamely at home against Forest Green, Boro also lost to a last-gasp goal at Swindon. Morecambe suffered a further setback when leading marksman Lewis Allesandra was very harshly sent off and was thus unavailable for today’s game. Stevenage were also without their first-choice goalkeeper – Paul Farman – due to suspension.

The hosts had made efforts to build-up the atmosphere before the game – such as a fancy dress Halloween competition and the `Boro Busker’ – one Blake Baker; `a singer/songwriter from Hertford’ serenading fans next to the ticket office. Given that the new North Stand at the ground would not be open as expected, the club offered all season ticket holders for that part of the ground replacement tickets elsewhere plus a complimentary ticket to bring a friend for free to help boost the attendance and thus atmosphere within the stadium.

It was grey, occasionally wet and soggy underfoot in Hertfordshire before and during the game. Shaun Miller had the first chance of the match, drawing a fairly routine save from stand-in goalkeeper Sacha Bastien after just two minutes. Alex Kenyon followed this up with a shot for the Shrimps after seven minutes which missed the target.  Ten minutes had been played when Bastien’s opposite number was first forced into action. On this occasion, Barry Roche fielded Kelland Watt’s header relatively easily. Up the other end, Cole Stockton’s shot a minute later was deflected just over the Stevenage bar with their goalkeeper flat-footed but the corner came to nothing. Watts had a better chance for the hosts after fourteen minutes but Kenyon was in the right place at the right time to clear his effort away from the danger area. There were half-chances for each side after this but the closest Morecambe came to opening the scoring is when Bastien did brilliantly to deny a Miller shot into his top corner after the latter had been set-up by a header from John O’Sullivan. So the half ended all-square and goal-less at half time with things pretty even.

The home team stepped up the pace and the pressure right from the start of the second period and the visitors found themselves under the cost for the first twenty minutes or so. Jason Cowley, Dean Parrett and Terence Vancooten all had shots blocked during the first quarter of an hour from the re-start. Having said that, however, Morecambe got the ball in the net after 49 minutes. Stockton’s shot beat Bastien but Shaun Miller was flagged as being in an offside position even though he was clearly not interfering with play. On such small margins can success and failure hinge…

Kelland had another excellent chance for Boro with sixty-six minutes played after being set-up by a combination of Cowley and Parrett but his shot was again deflected wide by a resolute Shrimps defence. Just twelve minutes were still scheduled to be played when unmarked substitute Charlie Carter was found at the far post by Parrett but his shot was straight at Big Baz who dealt with it without too much trouble. However, the key moment of the match arrived after 82 minutes. Carter slung over a corner which found its way to that man Parrett who returned the ball for Stevenage Skipper Scott Cuthbert to head powerfully home unchallenged. Referee Kevin Johnson added-on a massive eight minutes at the end but it made no difference to the final result: substitute Jordan Cranston missed narrowly with a long-range effort after six extra minutes but the home team remained on the front foot most of the time to further improve their impressive record against the sorry Shrimps.

The significance of this defeat cannot be overstated. Morecambe found themselves two points behind Stevenage this evening and four points adrift of the pack at the end of play this evening right at the bottom of the EFL. The clocks go back tonight but for Morecambe Football Club, the darker days of a long Winter have already arrived…