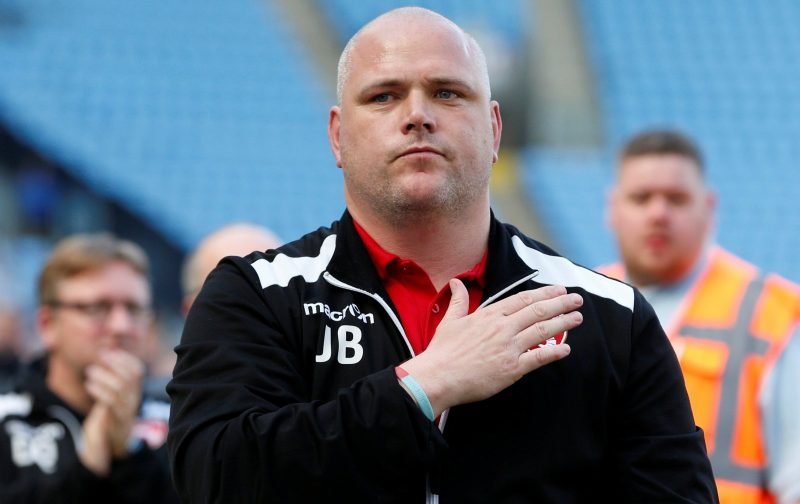 Morecambe – not a (Cam) Bridge Too Far…

Morecambe travelled to Cambridge United’s Abbey Stadium today for the penultimate game of the season to play a club three places below them – in twenty-first position – in the League Two table. Back at home, the Shrimps’ co-Chairman Rod Taylor announced this week that he wanted the club to `move forward’ in unspecified ways but tantalised us all when he added:

“Our budget is a third of what Notts County’s is this year, who are at the bottom of the league, and that says it all.”

But what does it say, really? That continued underfunding in relative terms is a fact of life at Morecambe which can’t be changed? That there is no correlation between the budget available to clubs and their success on the football field? If so, what are the implications for this profundity as far as the Globe Arena is concerned? Or did he mean that the Board appreciates the efforts of Manager Jim Bentley in again keeping the club in the EFL against all the odds? Or that the owners and executive at the club expect the Manager to continue to perform miracles on the resources to be found in a Sow’s Ear rather than a Silk Purse?

Without seeing the entire interview he gave to the BBC earlier this week, no fan can be certain exactly what Mr Taylor meant by the remark just quoted. With an absence – as usual – of any statement clarifying this on the Club’s website, all we can do is speculate. So come on Rod, let’s have some clarity here: what actually are the club’s plans to `move forward’ in the near or even distant future?

As for the opposition, U’s supporters have had the same sort of roller-coaster ride through this season as that endured by Shrimps’ supporters. They convincingly won their first April game 0-3 at Gigg Lane against promotion hopefuls Bury but haven’t won even once since with only a single draw in their last four matches.

Head to head, Cambridge memorably lost their only FA Cup tie against then non-League Morecambe at Christie Park during 2000. In League Two, they have won three of their nine previous clashes involving the Shrimps and drawn two. Critically, one of their losses against the team from Lancashire came last December when – in Colin Calderwood ‘s first game as Cambridge Manager – they were beaten three-nil at the Globe. Asked before today’s game if the final two fixtures of the season actually had any implications for his club’s prospects next year, United’s Scottish Manager answered – with commendable honesty: “Not really”. He at least clearly has plans in mind for next season’s campaign…

The weather was unseasonably cold and very windy as the game kicked-off in Cambridgeshire. United had the first chance of the game after three minutes when Hayden Coulson walloped in a shot from six yards out which clipped the frame of the goal. He tried his luck again three minutes later but his off-balance strike went miles away from the target. The visitors won a corner after eight minutes which Jordan Cranston took and the U’s defence couldn’t clear. Aaron Collins gratefully took advantage of their disorganisation and swept the ball past Dimitar Mitov into the top corner of the home net to put the Shrimps one goal to the good. With the visitors still pressing, home centre half Louis John did well after thirteen minutes to head a dangerous cross over his own crossbar for a corner. From this, the ball found its way to Steven Old but the Morecambe central defender steered his resultant shot just over the frame of the goal as well. Cranston then chanced his arm from a free kick about 35 yards out after twenty minutes: and missed. The hosts created a good chance to equalise after twenty-six minutes: Jevani Brown showed some neat footwork before setting-up Coulson for another shot which Ritchie Sutton did well to block. Paul Lewis then forced a save from Mark Halstead for Cambridge before Cranston hit the target for the Shrimps with a shot after 37 minutes which Mitov was equal to. Cambridge were getting on top though and they should have equalised after forty-one minutes. Old clearly fouled Brown in the Morecambe penalty area; Referee Nick Kinseley pointed to the spot; Brown dusted himself down and hit a powerful shot low to Halstead’s left. But the Shrimps’ keeper got down to it and brilliantly palmed the ball around the post to guarantee his team’s lead at half time.

United went straight onto the front foot at the beginning of the second period. Substitute Alexander Jones had a shot saved and then missed the target with a close-range header when well placed within the opening few minutes. At the other end, Paul McKay set-up Cranston to again test Mitov with a vicious shot after almost an hour as Vadaine Oliver was on hand to profit from any mis-field by the U’s minder. Sixty-seven minutes had been played when Brown set himself for a shot and then unleashed a thunderbolt which again failed to hit the target. A couple of minutes later, Coulson then took another shot which was deflected: a wrong-footed Halstead in the visitors’ goal was probably relieved to see this miss the target as well. As the hosts continued to dominate the play, Morecambe always looked dangerous on the counter-attack. Jordan Cranston was denied again by a tremendous save by Mitov in the eighty-second minute. Two minutes later, John’s header from a set-piece was just too high. David Amoo then had an effort blocked only for Morecambe to immediately counter-attack. Newly-arrived Richie Bennett played-in Cranston to advance to be one-on-one with the goalkeeper and this time Jordan made no mistake to put the Shrimps two goals up with a cool finish and just three minutes scheduled to play. That should have been that but yet again, Morecambe had their fans and their manager biting their nails right until the death. Deep in injury time, United substitute Tom Knowles swerved a free-kick round the Shrimps’ wall and out of the reach of Halstead to reduce the arrears. But they survived…

This was a good win for the Shrimps, regardless of the circumstances. It was also their second Double of the campaign. How many of us expected the final away game of the season to end this way, given the 6-0 hammering Jim Bentley’s men endured in a pathetic display at Crewe in their first one? This evening, both teams remained where they had been in the League Two table before the game. Elsewhere, Yeovil were winning nil-two at Northampton earlier in the afternoon to put themselves directly behind Cambridge and out of the relegation spots. But they couldn’t hold on; conceded two goals and found themselves out of the EFL altogether by the end of play. It’s a shame in a way – Yeovil Town are another team which should have been in the Football League decades before they actually were. But you get what you deserve in the end and the Hoops have been really badly run in recent times. Macclesfield excelled themselves again with a derby victory at Port Vale today. But they could still be relegated: Notts County also managed to win this afternoon, at home against Grimsby. So it’s between the two of them who accompanies the Glovers out of the Football League next Saturday. The Silkmen – with a vastly superior goal difference – only need a home draw against Morecambe’s hosts today: County, meanwhile, need to win at Swindon – nothing else will do.