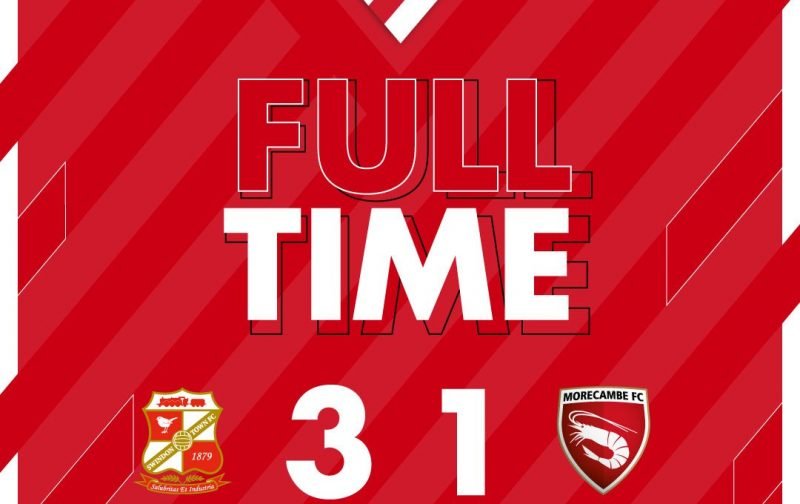 Swindon’s County has not been a happy hunting ground as far as the Shrimps are concerned. They drew here once but it is only five months ago since Richie Wellens’ side mauled them by four goals to nil and in previous contests home and away, the Robins have won every other of their seven meetings altogether including their only ever Cup clash plus all the games played in Lancashire. Even more alarmingly, they have conceded just a single goal in all their previous meetings with the Shrimps. Town went into today’s contest in Wiltshire in tenth position in League Two but their form is not brilliant: they have drawn two of their last three games and lost the other one: at home against Northampton eleven days ago. As for the visitors, Morecambe have won only one of their last five games and their form has been erratic at best as was reflected in their League position before the game: eighteenth.

It took just five minutes for Swindon to get themselves into the position they expect to be against Morecambe: winning. Keshi Anderson took a shot which ball bounced off a visiting defender to perfectly set-up Bradford City loanee Eoin Doyle who wasted no time slipping the ball between his countryman Barry Roche’s legs into the back of the net. But the visitors were level again after thirteen minutes when leading scorer Lewis Allesandra made it four goals in three games when he was fed by John O’Sullivan and beat Luke McCormick in his bottom corner with a powerful low shot. The two Shrimps’ players did a spot of role reversal just a minute later from a corner but O’Sullivan’s shot was saved by the Town goalkeeper. Andrew Tutte then sent over a cross after 16 minutes which Steven Old got his head to – but McCormick was in the right place at the right time again. Shaun Miller was the next player from the visiting side to try his luck but his shot just missed with seventeen minutes on the clock. The ball went virtually straight down the pitch and ended-up at Anderson’s feet: he moved the ball on to Jerry Yates who did a quick one-two with Doyle to beat the static offside trap before smashing the ball past Big Baz to re-establish Swindon’s lead. Just four minutes later, the Robins went even further ahead. This time, Lloyd Isgrove sent over a terrific cross from their right which Doyle headed low past Baz with aplomb. Isgrove himself had the next half-decent chance after 36 minutes but Roche was equal to it on this occasion. So it was three-one to the hosts at half time largely because their finishing was more assured than that of their opponents.

The second half was a tame affair with few chances for either team. Neither of the goalkeepers on show had a single shot to save. It could be that Town were happy to hold on to what they already had. Maybe Morecambe felt the same: a 3-1 defeat is an improvement on last time at this ground when all is said and done. Jim Bentley will be concerned that his best midfielder – Aaron Wildig – came off during the second half with yet another injury to add to the list which has reduced his appearances in the first team to far fewer than could have been the case in the time he came north from Shrewsbury. The Manager will also be looking uncomfortably towards the bottom of the table. Since the sad demise of Bury this week, only one team will be relegated at the end of the season to the National League. The current occupants of this dreaded position are Scunthorpe, who lost again today (at home versus Carlisle) and have only one point on the board after six League Two games. Morecambe have five points and are twentieth this evening. Swindon’s routine – and regular – win against the Shrimps pushed them up to fifth in the table.