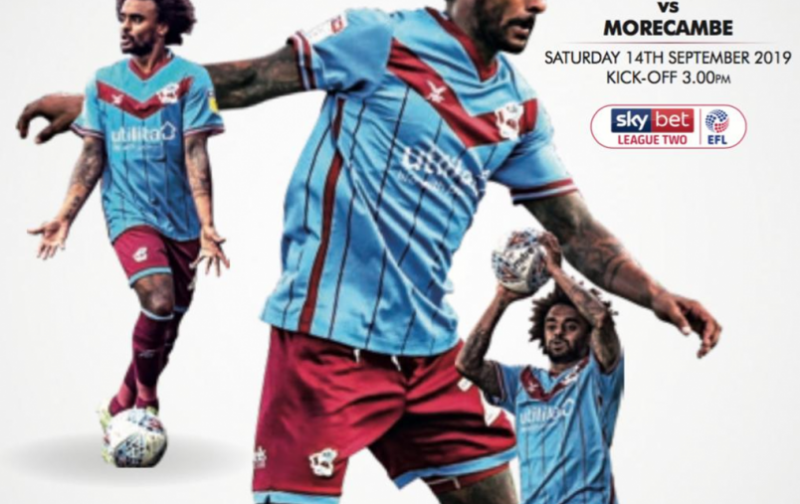 Scunny-Side Up for Mr Hurst…

Morecambe made the long trip eastwards today to Lincolnshire to face struggling Scunthorpe United in a game which could have a real bearing on the bottom of the League Two table. The Iron have had a chequered history in recent years. Since moving to new ground Glanford Park in 1988, Brian Laws, ably assisted by our own Mark Lillis (Sammy McIlroy’s assistant at Morecambe) guided United into the old Division Two in their second season in charge during 1999. They were immediately relegated back again and by 2004, they were involved in the same sort of fight to retain their Football League status as they seem to be in currently – they survived the drop to the Football Conference by just four points. The very next season, though, they were promoted. With former Physio Nigel Adkins taking the reins and leading scorer Billy Sharp setting the world alight, the Iron went up once more into the Championship only to be immediately relegated and then winning promotion straight back again on the rebound. So, just ten short years ago, Scunthorpe United were a Championship team with realistic hopes of at least consolidating their position on the fringes of the footballing Valhalla of the Premiership. It wasn’t to be. Adkins moved on to pastures new and United started the long slide back to where they had been fifteen years previously: right at the bottom of the EFL.

Here’s a thought: does this decline echo the fortunes of the town itself? The industry from which the club gets its nickname – Iron – has endured continuing uncertainty during the last few years.  With the loss of the steelworks, Scunthorpe could become yet another ghost-town to add to the dozens in the North and Midlands of England (Bury; Bolton; Darlington and Hartlepool immediately spring to mind); the casualty of cheap imports from overseas. What will happen to Scunny, its workforce and thus the club then? (Answers on a postcard please to Mr B Johnson, 10 Drowning Street, London – and no, `Drowning’ isn’t a typo…)

As far as I can discover, the two clubs have only played each other twice before, five years ago. Then, United won their home tie and drew away in League Two. The most curious parallel between the two clubs is probably the fact that their former grounds – The Old Showground and Christie Park respectively – are now Sainsbury stores. There is still a plaque marking approximately where the centre circle once was in the car park at Morecambe; the one which marked the same place in Scunthorpe could be found `just in front of the delicatessen counter’: it has subsequently been removed altogether.

What other parallels are there between Scunthorpe and Morecambe? The Shrimps start every season as the bookies’ favourites to be relegated. Conversely, the Iron started this season as many pundits’ favourites to go straight back to where they had been last season: League One. However, confounding most pre-season predictions, the hosts started today’s game rock-bottom of the EFL with only one point to show for the seven league games they have played so far. They are already five points adrift of today’s visitors, who arrived in twentieth position. To make things even worse, the Iron have failed to score in four of these seven games; netted only five times in total and shipped fifteen goals themselves. Their current form is four straight league defeats in a row.  Ex-Grimsby and Shrewsbury boss Paul Hurst must have no fingernails left: this sort of run is unsustainable for any football manager at any level.  Today, with Andy Butler out with an ankle injury picked-up against Mansfield, first-team regulars Levi Sutton and Andy Dales still not back to full match fitness and Ryan Coldclough unavailable because of a groin strain, Manager Hurst was forced to shuffle his pack. He dropped four of the team who featured against the Stags, putting only two of them – Regan Slater and George Miller – on the bench.

As for Morecambe, Jim Bentley was unable to name a substitute goalkeeper:  Mark Halstead picked-up an injury during the week and was not fit enough to be selected today. There was just one change from the starting line-up against Salford last Saturday: Jordan Cranston replaced injured Ulsterman Luke Conlan.

It was Sunny at Scunny; dry but a bit cloudy at times with a slight breeze at Glanford Park before and during the game.  Once Morecambe kicked-off, the first five minutes or longer were scrappy and any hopes that the visitors might test the fragile confidence of a team at the bottom of the division by attacking them were to be disappointed. In fact, Scunthorpe had the first half-chance of the match, Junior Brown sending a low cross from the United left to Kevin vanVeen, whose shot went harmlessly over the bar. As both sides seemed to be happy to play the long-ball game, you could hear disgruntled fans encouraging both teams to `get on with it!’ Aaron Wildig duly obliged after ten minutes, forcing a fairly routine save from Rory Watson after good work by John O’Sullivan. Abo Eisa – booked for diving last time out against Mansfield – caught the eye for the Iron as the half wore on but the home team wasted the opportunities they had from set-pieces with poor technique, constantly either over or under-hitting the ball.  They had a couple of other attempts which missed the target before the Shrimps had the clearest chance of the game so far after eighteen minutes. Sean Miller spun away from his marker and hit a shot from a George Tanner pass which was blocked. Watson did well to save a fierce shot from Andrew Tutte a couple of minutes later after he had been set-up by Jordan Cranston from a free-kick. But it all went wrong for the visitors after 24 minutes. Referee Nick Kinseley adjudged vanVeen to have been pushed in the penalty area and Jamie Proctor stepped up to take the resulting spot-kick. This was brilliantly saved by Barry Roche but – as his defenders stood by and watched – Proctor was first to react and he buried the rebound. As Morecambe failed to keep the ball on the deck and Scunny’s huge centre-halves dealt all too easily with everything in the air, it soon got even worse for Jim Bentley’s men. Proctor fed winger Alex Gilliead whose fierce shot from 25 yards was brilliantly turned by Big Baz against his left post with another superb reaction save. Once again, though, his defence were too slow to react and vanVeen was able to double the Iron’s lead as he got to the loose ball first. There was only one team in it at this point and Roche was basically playing United all on his own. He did well again to keep out a side-footed volley from that man vanVeen after 38 minutes. But he was beaten yet again after making another fine save from Gilliead only to see Matty Lund sweep the rebound past him with forty-one minutes on the clock. Could it get any worse? No, not really.

This was a literally pathetic display against yet another team the Shrimps should beat easily. We saw it last season away at Halifax where they were humiliated by a poor non-league team which they should have already demolished at home in the FA cup. We saw it again against doomed Notts County later in the campaign at Meadow Lane: their inability, reluctance or simple fear to attack a team clearly there for the taking ended in a bore-draw in another spineless performance. The display the defence put in here during the first half today was even worse: Scunthorpe must have thought all their Christmases had arrived early.

Jim Bentley changed the line-up which had performed so poorly for the second half: the ineffectual Cranston and defender Ritchie Sutton were replaced by centre-forward Cole Stockton and right-back Adam Buxton. The combination of Miller, Stockton and Lewis Allesandra has been tried by the Morecambe Manager before to no effect. Would it work this afternoon in extremis, though?

O’Sullivan had the first decent effort for either team with just four minutes of the second period played but his shot was straight at Watson, who saved it easily. The home custodian made another routine save a minute later before the ball went down the other end. Baz reached a long-ball just before vanVeen was able to after 50 minutes and then saw another effort deflected wide after 53 minutes. Substitute Buxton should have done better to put in some sort of challenge as the corner came over but Proctor’s volley narrowly missed the target. The visitors had the next chance after 56 minutes when decent play down the right saw O’Sullivan cross for Stockton to force an excellent save from the Iron’s young goalkeeper with a diving header at the expense of a corner. From this, Allesandra forced an even better save from Watson again at the cost of another corner kick with a powerful right-footed shot which the keeper pushed over the bar. There were half-chances for both teams following this but it looked as if Rory McArdle had put the home team even further ahead after 65 minutes.  When the ball ended up in the back of the visitors’ net from the central defender’s head (or was it his shoulder?), though,  it was disallowed. There was a suspicion of handball by a Scunny defender in his own penalty area a few minutes later and Cole Stockton seemed to be impeded shortly afterwards even more obviously than vanVeen had been in a similar position during the first half. But Referee Kinseley gave nothing on either occasion. In injury time, though, the man in the middle finally did award a penalty to the Shrimps when Stockton was fouled by McArdle. Buxton stepped up and hit the ball low and powerfully into the bottom corner. But Rory Watson ensured that the Shrimps would leave with nothing at all today by diving to his right and stopping both this shot and the follow-up as well. In a way, this incident on its own summed-up the difference between the two sides today: United were up for it and – very regrettably – Morecambe weren’t.

So this was a thoroughly miserable experience for the loyal fans who travelled all the way to the east of the country to watch this rubbish. Morecambe were not good enough at any time, end of story. The defence was hopeless bar the goalkeeper; the midfield ineffectual and the forward line disjointed. Against a poor team clearly low on confidence this was a potentially disastrous result. Scunthorpe have closed the gap between themselves and the visitors to just one position and two points. What can we say? We can say thank god for Carlisle – words I never thought I would ever see in any of my football reports. The Cumbrians won at Stevenage this afternoon and only the hope we have currently is that the team from Hertfordshire are even more hopeless than our own could keep us in the EFL this season. On today’s performance, we would struggle even in the National League.