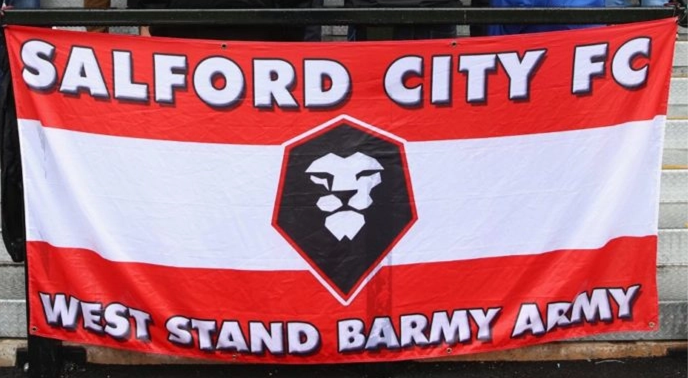 The Ammies Throw It Away

Salford City visited the Globe Arena today to play the Shrimps for the first time ever. They were also seeking their first-ever win away from home in the EFL. City’s rise from obscurity to the football league has been well documented. The fact that the so-called Class of 92 have adopted this club – in the spotlight of huge TV coverage including a documentary on terrestrial channels at prime time and all sort of other media hyperbole – leaves most of us who have absolutely no interest in Manchester United or its Old Boys completely cold. The Ammies (pardon?) have had a silver-spooned entry into the EFL which other teams which have had to get there under their own steam and with limited resources such as Cheltenham, Newport County, Accrington and ourselves at Morecambe can only stand back and envy. Surely it must be easier to succeed when you have the backing of multi-millionaire celebrity footballers than it is to fail. Looking a little further afield, you wonder how the supporters of Bury FC must feel given the familial and other ties between the Neville brothers and their home town club – where was any tangible support from the famous duo in the Shakers’ hour of need?

Anyway, Salford arrived at the Globe Arena in sixteenth position in League Two; four places and two points better-off than today’s opponents. City have only lost one of the six League matches they have played this season; the Shrimps have lost three. The stark difference in resources between the two clubs can be simply shown by the fact that whereas ex- Fleetwood Manager Graham Alexander was able to sign Sunderland defender Jack Baldwin; Leicester City’s defender Sam Hughes and Luton striker Jake Jervis on-loan last week on deadline day until the end of the season; opposite number Jim Bentley has signed precisely nobody.

It was bright but breezy as the match kicked-off by the North Lancashire seaside. It was an open game to start off with but Barry Roche was forced into the first save of the game after nine minutes from a shot by Danny Lloyd. John O’Sullivan had an effort blocked for Morecambe shortly afterwards and Kyle Letheren was forced into a save from George Tanner after eleven minutes at the expense of a corner. But play quickly switched to the other end as Richard Towell took a shot which Lloyd managed to get a touch to and divert past a stranded Shrimps’ goalkeeper with just a quarter of an hour played. Two minutes later, Jake Jervis could have made the lead even more emphatic for the visitors but was unable to get a shot to dip enough as it crossed Big Baz’s bar. Twenty-three minutes were on the clock when Aaron Wildig fed Lewis Allesandra but Morecambe’s leading scorer missed the target on this occasion. The visitors continued to look livelier and should have gone even further ahead after half an hour when referee Josh Smith adjudged Ritchie Sutton to have handled in the Shrimps’ penalty area. But Lloyd fluffed his lines with a shot which came back off Roche’s bar and was cleared. With 38 minutes on the clock, Shaun Miller got in behind the City defence but a player who has looked short of confidence in recent times shot over when well placed. In keeping with the flow of the game so far, though, Salford Captain Adam Rooney had the last chance of the first half but his shot right at the death was fielded well by Roche in the home goal.

Jimbo must have come out with some choice words during the break because the hosts went straight onto the front foot at the beginning of the second half. Aaron Wildig played in Miller who this time made no mistake as he belted the ball past Letheren to make it all-square after just three minutes. Miller turned provider twice in quick succession after this, playing-in Allesandra in the forty-ninth and fiftieth minutes – the Salford goalkeeper denied him both times. But there was not to be a third time lucky for Letheren and he was beaten again as Allesandra made it third time lucky for himself to turn the game on its head within five minutes of the restart. The visitors rallied a bit after that and started to create a few half-chances of their own. Baz was the busiest of the two goalkeepers, saving from Jervis and Rooney by the time just over an hour had been played.  With the wind back in their sails, the visitors made it all-level after 66 minutes. Lloyd scored directly from a free-kick which Morecambe’s veteran goalkeeper spilled into his own net: it should have been a routine save. He redeemed himself with only a couple of minutes scheduled to play, however when he saved a second penalty, this time getting down low to spoon-away Towell’s effort. It had been awarded when the lumbering substitute Adam Buxton brought-down Lloyd – the City Manager responded to the miss by immediately taking the player who had been thwarted off.

So the match ended all-square with City becoming the draw specialists in League Two: this was their fifth draw in a row in this competition. They have only themselves to blame. To miss one penalty is unfortunate; to miss two in the same game is unforgivable.  Morecambe must be given some credit for getting their noses in front at a point when they looked well beaten. But their all-round performance still gives reasons for concern about Curate’s Egg nature of the current team: good in parts; bad in others. The point means that they stay in twentieth position; Salford, meanwhile, go up one place to fifteenth.

Oh – and by the way, City are called `the Ammies’ because they were once known as Salford Amateurs. Make a note of that – you never know when it might come in useful…