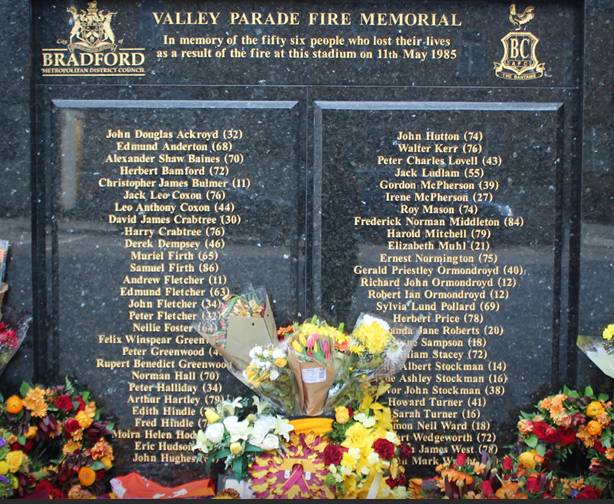 Today was potentially the most significant one not only in Morecambe Football Club’s Centenary year but in the entire history of the club so far. If they were to beat visitors Bradford City and Crawley either drew or beat Bolton Wanderers in East Sussex, the Shrimps would find themselves automatically promoted to the uncharted waters of League One for the first time ever. The same thing would happen if – somewhat more against the odds – already-relegated Grimsby were to pull off a shock win in the fenlands against Cambridge United.

City arrived under a bit of a cloud. They were in fourteenth position in League Two but have only one point to show for their last six matches. This arrived courtesy of a nil-nil draw against Scunthorpe at Valley Parade last Saturday. The single point made Bradford mathematically safe from relegation after a run of five defeats in a row during which they had scored a mere two goals.  They therefore had nothing to play for today but – equally – nothing to lose either.  Our old pal Clayton Donaldson and his team-mates, Lee Novak, Anthony O’Connor, Kian Scales and Andy Cook would all be out-of-contract after the game and thus would be seeking to impress their own management and potential new employers on the pitch today. They would also want to put on a display fit to honour the memory of the fifty-six poor souls who lost their lives in the fire at their ground almost exactly thirty-six years ago on May 11th 1985. I was living near Bradford at the time and I know the profound effect this disaster had on the city; its surrounding area and also Lincoln – who  lost some fans as well – for literally years afterwards (and for some people who survived even now). God bless them.

However, going back to the present, Bradford were also facing a team against which they have a pretty good win ratio. In seventeen previous fixtures with Morecambe, the Bantams have only lost four times but won nine, most recently during a truly terrible game in West Yorkshire last February.

City are currently under the Interim dual Management of Mark Trueman and Conor Sellars. I’ve searched in vain for a quote to use about today’s game from these two men. All I can find from either of them, though, is a string of justifications and excuses for City’s current poor form. They both unashamedly also point their fingers at former Manager Stuart McCall into the bargain: he is apparently solely to blame for the current mess at Valley Parade in its entirety. I’m sure the players the Bradford legend brought to the club will be really motivated by scapegoating remarks such as that – says he facetiously…

Morecambe started the match on the back of four wins and a single loss in their last five League Two games. An under-strength team won impressively at Walsall last Saturday where they scored two goals without reply to add to the thirteen goals they have clocked-up altogether during these fixtures.  Today, Manager Derek Adams was able to welcome back a key player in the shape of Carlos Mendes-Gomes from injury but Aaron Wildig remained unfit and unable to be selected. The Manager acknowledged the importance of the game a few days beforehand and told the local press how he was trying to cope with its unique pressures:

“We’re trying to keep things as normal as possible. We’ve had lots of media requests this week, asking to do interviews, but we’ve tried to knock them back because it’s important we concentrate on our job. Cambridge and Bolton are in pole position and, if they win, they are going to be in the automatic promotion places. If we win, then we’re looking for them to suffer a defeat or a draw in order for us to get automatic promotion. We’re only going to focus on what we can do. A draw is good enough if Bolton lose but we will be going out to try and win the game. We have done really well this year, I think the players have got to take huge credit. They have come through the situation with the virus, where we have had to get changed in cars, go out and train in bad weather and then go straight back home. It’s been really difficult for players all over the country, so that’s going to be one thing they have to take a lot of credit for.”

It has been wet and unseasonably cold in North Lancashire lately. It was dry though as the game kicked-off and the rain held off for the first half before actually brightening-up as the second half progressed. The visitors – in a striking almost all-purple strip – looked lively throughout and played some neat football at times. The difference between the two teams was the lack of a cutting edge for the Bantams and a ruthless eye for goal by the hosts. In defence, Skipper Sam Lavelle led by example for the Shrimps today and had an outstanding game. Bradford – with ex-Morecambe trainee Ollie Crankshaw catching the eye on their right flank – put a number of dangerous crosses over but the Shrimps’ defence dealt with them well. City had a golden opportunity after twenty minutes when Lee Novak was clear on goal only to be denied by a miraculous last-ditch tackle by the Morecambe Skipper. They had a shout for a penalty almost at the end of the half but it looked like a clear dive to me and – far more importantly – also to Referee Craig Hicks, who waved play-on.

At the other end, though, Morecambe could have taken the lead after a quarter of an hour. They had been pressing before Bradford Captain Paudie O’Connor played a poor defensive pass which Cole Stockton latched onto. He slipped the ball to Brad Lyons on the right, who moved it forwards before taking a low shot which away goalkeeper Sam Hornby did well to save. The loose ball was hoofed to their right by a panic-stricken City defender only for Carlos Mendes-Gomes to control it, pass it to Toumani Diagouraga who did a shimmy and rolled it to Liam McAlinden to smash a shot against Hornby’s right-hand post with the goalie well beaten. Just after news had arrived that Cambridge were winning against Grimsby and Bolton had gone 0-2 up at Crawley; Morecambe took the lead. Twenty-eight minutes were on the clock when `Toums’ showed some fancy footwork and then played-in McAlinden on the Shrimps’ right to take the ball on, decline a pass to a well-placed Cole to his left in the centre of goal and instead score himself with a beautifully judged shot. News that Bolton’s mastery of the Dark Arts had seen George Francomb sent-off for Crawley with just half an hour played trickled though before Morecambe could well have been awarded a penalty themselves. McAlinden had got the better of Paudie O’Connor on the right side of the Bradford penalty area from his point of view. The City Captain brought him down with what might have been a fair challenge but clearly deliberately handled the ball as both players were on the deck. But Referee Hicks inexplicably awarded a free-kick against the Morecambe attacker instead. So the hosts went back to the changing rooms one goal to the good – and pretty good value for it even if the opposition had seen a lot of the ball.

The second half was more or less a carbon copy of the first: Bradford played some nice football at times but Morecambe always seemed the most likely side to score. Three minutes had been played when Ryan Cooney’s excellent cross from the right was headed-out to Toumani, whose instant shot went just to the left of the target from his point of view. Shortly after this, news came in that Bolton were three goals to the good at Crawley so all hopes in North Lancashire were on a Grimsby fight-back at Cambridge. All Morecambe could do was carry out their Manager’s stated aim to win the game. Carlos Mendes-Gomes had done very little following his return from injury but he produced a little bit of magic after 54 minutes. He received the ball in the Bradford penalty area and then turned Paudie O’Connor inside out before laying off a perfect pass to his right for Cole to smack the ball home to settle the game. As reports of further goals from Crawley and Cambridge came-in, the game lost a lot of its edge and basically meandered to a frankly anti-climatic end. Kyle Letheren earnt his corn in injury time as he pulled-off a tremendous save to keep out a really good diving header by Billy Clarke from fellow substitute Clayton Donaldson’s cross from the Bradford left. But that was it. Cambridge beat Grimsby 3-0 to deservedly join Champions Cheltenham in League One next season.  Well done to both clubs. Bolton finally won 1-4 at Crawley and I’m afraid I can’t find it in my heart to offer them any congratulations at all on their promotion – like Salford City, they represent all that is cynical and unpleasant in the modern day game in my opinion at least.

But Morecambe live to fight another day. Derek Adams was characteristically upbeat after the game. He said:

“It’s not over yet. It’s about a wee bit of spirit; a wee bit of organisation. It would be silly not to be delighted; not to be ecstatic to be fourth in the league.”

He pointed-out that – having won literally half of all the games they have played in League Two this season – Morecambe are the club in the best form of anyone in the division. They will now face Tranmere Rovers at Prenton Park on Thursday, 20th May in the first leg of the Play-Off Semi-Finals. The reverse fixture will be played the following Sunday at the Maz and the winner will go on to face the victorious side in the Forest Green Rovers and Newport County fixtures at Wembley on Bank Holiday Monday, 31st May.