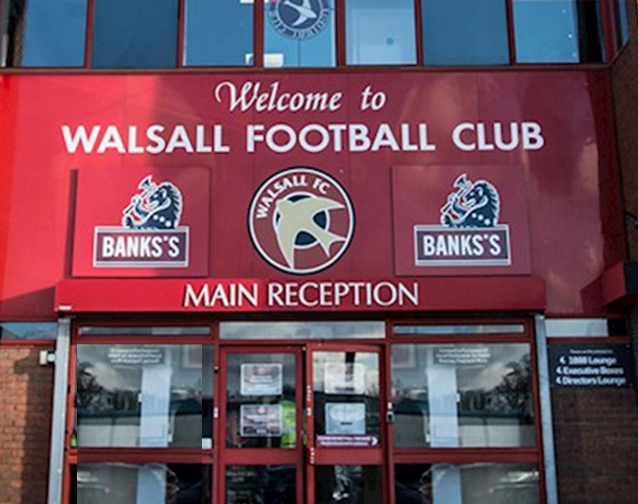 May Day at Walsall. Mayday at Bolton…

Morecambe visited the Bescot Stadium today for their final away game of the season. Hosts Walsall were nineteenth in League Two on the back of three wins and two losses in their last five games. The Saddlers have only played the Shrimps four times before in all competitions and have beaten them just once but lost twice, including the only other time they have completed a match at this venue (one other game was abandoned due to a waterlogged pitch a couple of years ago.) The only draw between them happened in the pouring rain in North Lancashire last January in a game memorable mostly for a truly appalling display by Referee Graham Salisbury, who sent Morecambe Manager Derek Adams to the stands late on in the contest.

The Shrimps arrived at the West Midlands in fourth place in League Two, having won three and lost two of their last five matches. Their most recent game ended in an absolutely key defeat against third-placed Bolton Wanderers last Saturday when – for the fourth time in the last two months – Morecambe had a defender (Kelvin Mellor this time) sent-off as well. So surely the first aim of Derek Adams this afternoon was to keep a full complement of his men on the field (and himself in the dug-out); the second one would be to take all three points home with them.

Last night, Harrogate Town did the Shrimps a tremendous favour by beating second-place Cambridge United by the odd goal in nine. This meant that – if United lose their final game and Morecambe win both of theirs still to play – the North Lancashire club could still enter the uncharted waters of League One automatically by overtaking them on points, according to the maths at least.

Perhaps more realistically, one eye would definitely be on what was happening further north as Exeter visited Bolton today. If the Grecians could pull-off an away win and improve their own chances of reaching the Play-Offs, they would reduce the gap between Morecambe and the Trotters to just one point with only a single match of the campaign still to play.

All this is assuming – of course – that Walsall weren’t going to upset the apple cart and actually beat the Shrimps today – which was very definitely not part of the script as far as fans of Morecambe were concerned.

However, before any of this could happen, there was serious doubt during the days which preceded today’s game that Walsall’s acting Head Coach – Brian Dutton – would even be in charge of the team at three o’clock. Local paper, the Express and Star suggested last Monday:

“Following the club’s impressive 2-0 win over Scunthorpe United on Saturday, Dutton shocked supporters and media with his post-match comments. The 36-year-old called for clarity over his future and said he was unsure whether he would be staying on next season. However, he also hinted that the match on the weekend may have been his last in charge as his role remains uncertain. As it stands there has been no official movement on his position but many are expecting he may leave before Walsall’s home clash with Morecambe on Saturday.”

As things turned out, he has apparently (in the absence of any local media or official club announcements and his physical presence on the touchline this afternoon) stayed-on – for now at least.

Walsall’s temporary Head Coach has won just three and lost eight of eighteen matches since taking over from the Port Vale-bound Darrell Clarke in February. All these victories have come this month though and have included defeats of two of Morecambe’s rivals near the top of League Two, Forest Green and Tranmere. The other win, as mentioned above, was at Scunthorpe last time out. But the Saddlers have also been beaten in this time by strugglers like Colchester and Barrow.

So `unpredictable’ was the word which probably best described Walsall’s recent form. We don’t know what Brian Dutton said before the game because nobody at Walsall seems to have taken the trouble to ask him. But we do know what nineteen year old midfielder Sam Perry thought about the upcoming clash because – in the reality of a long-overdue boycott of social media such as Faceflannel which give platforms to racists, bigots and assorted other types of moron on a daily basis – it is just about the only thing about today’s clash I can find on the official Saddlers’ website:

Morecambe Manager Derek Adams said prior to the game:

“We’ve got two games remaining and we’re looking forward to the run-in. It’s extremely tight from second all the way down to ninth and we’re in a strong position. We know the points required to get us either automatic promotion or secure ourselves in the play-offs. We played very well last year at Walsall, it was a great victory for us on a Tuesday night. We scored late in the game to make it 2-0 and put the game to bed.”

Derek was already missing a pivotal midfielder in the shape of the injured John O’Sullivan. But today, he was also deprived of two more of his key players in the persons of Aaron Wildig and Carlos Mendes-Gomes due to concussion protocols and injury. Liam Gibson was not fit enough to feature in the squad either and Kelvin Mellor was suspended. So he named a very attack-minded First Eleven, with Brad Lyons and Freddie Price both starting along with twin strikers as well for a change in the shape of Cole Stockton and Liam McAlinden.

It was dry and quite bright in the West Midlands as the match kicked-off. The first half was a pretty grim affair. There were few chances and the visitors offered virtually nothing going forwards with Cole Stockton cutting a lonely figure up-front until injury time. Walsall looked the livelier of the two sides with Tyreik Samuel Wright catching the eye on their right flank on a regular basis. The Saddlers won a few corners and Morecambe occasionally struggled to clear these. On two occasions, dangerous crosses went tantalisingly right across Kyle Letheren’s goal but with no home player anywhere near them to finish them off. After 25 minutes, one of these crosses came in from the right and was cleared for a corner kick on the Walsall left. Then Stephen Hendrie played a low cross from the left away for a corner to the Walsall right with half an hour played. A good run by Samuel Wright in the thirty-eighth minute saw the ball deflect off him to a well-placed Josh Gordon on the right of the Shrimps’ penalty area from his point of view: but his attempted finish was in line with the game so far: awful. Injury time duly arrived with neither goalkeeper having had a shot to save. Letheren made a long clearance into the heart of the home defence after 47 minutes; the ball was allowed to bounce to Dan Scarr on the edge of his own penalty area only for Cole to cleverly pinch it off him, knock it forward and then latch onto it to steer it past Jack Rose in the home net with an assured shot to put the visitors one-nil up with virtually no time left of the half. Given that he’d fed on crumbs so far – and scant crumbs at that –  this was a tremendous strike by the Morecambe centre-forward. Perhaps more importantly, it was also a goal which could prove to be priceless at the end of the game despite the news from Bolton that Exeter were losing by the only goal of the match so far.

Morecambe came out for the second half and immediately stepped-up the pace. They got at Walsall right from the off and pressed them further up the field and never gave them either time or space on the ball. With Samuel Wright increasingly ineffectual and the Saddlers failing at any time to adapt to the Shrimps’ hustling tactics, there was only going to be one winner of this game.  Walsall’s sole attempt on goal all game arrived after 50 minutes when Samuel Wright’s low cross from the Walsall right was played back to Gordon, whose header went way off target. News was trickling in by this time that Exeter had equalised at Bolton and Morecambe could have gone further ahead to celebrate this fact after 56 minutes. Substitute Ben Pringle’s virtual first contribution to the game with just over an hour played was to escape up the Morecambe left and put in a cross which found its way to an unmarked Toumani Diagouraga in the opposition penalty area. He put a tremendous amount of spin on his first-time shot but he also spun the ball just wide of the target. Pringle then took a free-kick after 67 minutes which Sam Lavelle headed back into the danger area but Walsall managed to clear. Two minutes later, the visitors had another chance to go further ahead. Yann Songo’o played a superb cross to Liam McAlinden at the far post from the Morecambe right; Liam headed it down and Cole just couldn’t quite sort his feet out as the ball fell to him virtually on the Saddlers’ goal-line.  There was even time for Referee Lee Swabey to tell the Morecambe Manager to calm himself down after 74 minutes as the Scotsman could be heard loudly yelling at the Third Official on the sidelines. But Derek would have been happier literally a minute later. Pringle took a corner from the Shrimps’ left; Rose did brilliantly to save Lavelle’s powerful header from it but the outstanding Songo’o was quickest to react to the second ball, heading it powerfully home to put the result beyond any possible doubt. Walsall’s heads seemed to drop after this and the match ended with them having failed to test the visiting goalkeeper even once throughout the contest.

This was a tremendous display by Derek Adams’ under-strength team today. During the second half in particular, they looked like a really good side who play for each other and know how to win  The Manager and his staff started doing a little jig on the pitch after the game had ended when the news of a 96th minute winner for Exeter at Bolton arrived through the ether. The club from Up North have done all they can to make next weekend’s final fixtures in League Two as exciting as anyone could hope for. They still need help from elsewhere- critically from already relegated Grimsby to pull-off an unlikely victory over Cambridge at the Abbey Stadium or Crawley to defeat or draw with Bolton in West Sussex. If either of these things actually happen and Morecambe beat Bradford City at home, they will be promoted automatically to League One. It was May Day today but the Mayday distress signals were all coming from Bolton, who remain a single point ahead of Morecambe with just one game still to play until the final reckoning at the end of the season.