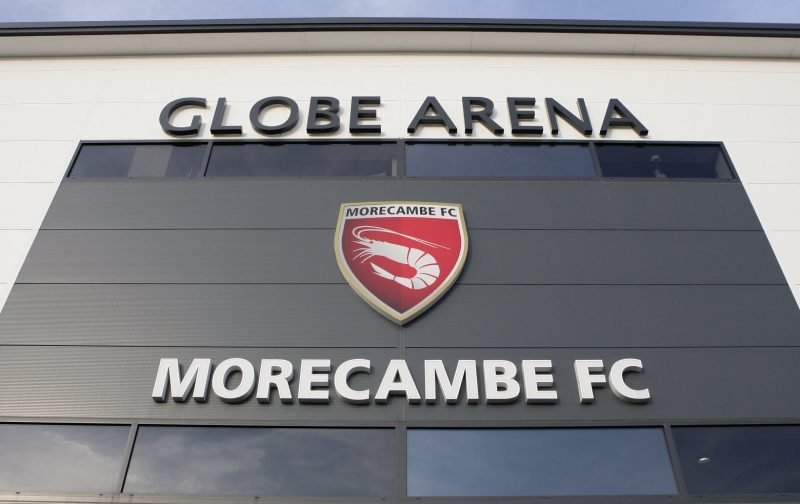 John McGreal’s Colchester United visited Morecambe today sitting eleven positions higher than their opponents in League Two and nine points better than off than Jim Bentley’s men. United were sixth, having been in the Play-Off positions for most of this season. They arrived after a local derby win over Southend in the Checkatrade Trophy during the previous mid-week and a victory over Stevenage last Saturday in Essex. The Shrimps’ form, however, has improved in recent times with just one loss in their last five games and three wins. Historically, their previous record against each other was perfectly even – a stalemate of four games played; four games drawn.

Under overcast skies, the first ten minutes saw the men in the green shirts probing; Barry Roche punching the ball and Jim Bentley loudly bellowing instructions from the home dugout. In terms of chances created, though, there was nothing to report. And so it went on. In Kane Vincent-Young on their left wing, the visitors looked like they had someone who could really play. Frank Nouble looked pretty tricky as well. So the first half was largely a rearguard action for the Shrimps. Josef Yarney excelled against wily old stager Steve Norris in the middle and Luke Conlan and he rarely looked seriously troubled. Up front, though, Morecambe offered very little threat and visiting goalkeeper Rene Gilmartin had little to do. He had not even one shot to deal with and the Shrimps did not win a single corner during the first forty-seven minutes. Just as it looked like the stalemate was going to last until the break, Colchester’s superior possession finally paid off. They passed their way up the field and through a Shrimps defence which continually backed off until the ball reached the feet of Courtney Senior and he duly placed a well- judged shot past Big Baz to put the men from Essex into a deserved lead. Morecambe were off the pace, midfield Maestro Aaron Wildig had an uncharacteristically poor half and returnee from injury Kevin Ellison was anonymous.

If the Shrimps were to stand any chance of getting back into the game, they would need to play more assertively and consistently in the second half. They duly did so and visiting goalkeeper Gilmartin was busier during the first ten minutes of the second half then he had been throughout the first. After forty-seven minutes, Vadaine Oliver only just failed to connect with a cross from the Morecambe right and a Colchester hand appeared to me at least to help the ball away in their own penalty area. Four minutes later, Frankie Kent did brilliantly to clear another dangerous cross from the home team’s right. Just a minute later, Oliver did really well with some neat footwork to set-up Kev who seemed certain to score but he inexplicably failed to convert the chance. The Shrimps forced their first corner kick after almost an hour – the ball finally found its way to Luke Conlan who tried his luck from a long was out – and missed to Gilmartin’s left. Although Colchester had the occasional chance on the break, John McGreal’s men clearly intended to hang on to what they already had during the second half. The usual tactics – slow dead ball kicks by the goalkeeper; delays at every throw-in or free-kick awarded to them and all the other things that most football teams indulge in to waste time thus ensued. But some of the play-acting and blatant cheating which they employed was beyond the pale. Harry Pell and Kent both feigned serious injury to eat up a bit more time but Conman Of The Day award must go to Tom Lapslie. He was clearly struck in the chest – not very hard at that – during the second half. But he rolled around clutching his wedding tackle as if he had been pole-axed for ages afterwards. When the referee insisted he had to go off, he then tried to argue that he had miraculously recovered. But only a couple of minutes later, there he was rolling around in apparent agony all over again, still clutching his nether regions. Shame on that man – there was absolutely nothing wrong with him. And if it was intended to fool the referee, it failed in any case: Mr Haines added-on five minutes at the end. So why bother? Before Lapslie’s pathetic play-acting, Vadaine came closest to equalising all afternoon for the Shrimps when his powerful header following a tremendous dribble and cross by the impressive Liam Mandeville hit the bar with Gilmartin beaten after 63 minutes. It was All Hands To The Pump at the back for United with eighty-four minutes on the clock when, with the ball pinging all round their penalty area, it could have ended-up anywhere. But try as they might, Morecambe couldn’t restore equality and Colchester managed to hang on to the slight advantage they had at half time.