How Much Does A Piece Of Perspex Cost? 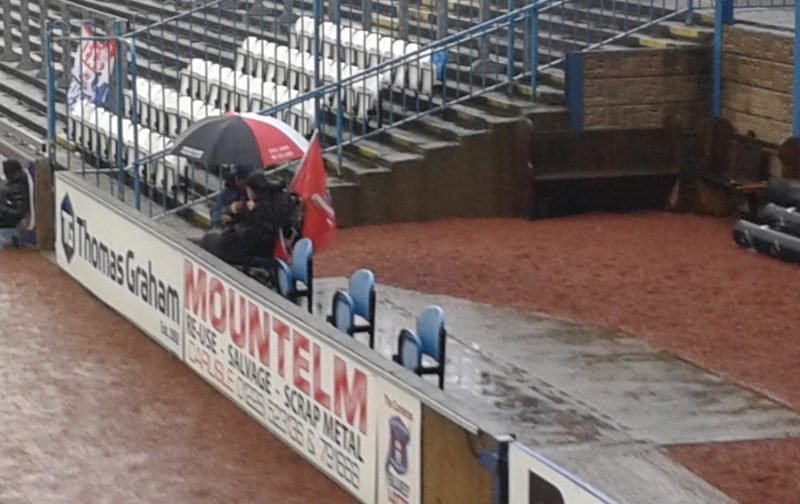 Morecambe have an appalling record against Carlisle United: just one win in all competitions from fourteen previous clashes. The most recent of these was just last September when – having been twice in the lead – the Shrimps contrived to lose a cup game 3-2 in Cumbria. The Blues started today’s contest tenth in League Two; twelve positions and nine points better-off than their opponents. However, John Sheridan’s men are currently on a really bad run of form, having lost all of the last four games they have played in all competitions. Morecambe, on the other hand, have lost only two games in a row. Not much to brag about, admittedly and Jim Bentley must be at least as concerned about his ever-growing list of injured players as he was about points in the bank prior to the match. (Picture 1)

It was wet and very windy at Brunton Park before and throughout the game today. Not the best place to be if you happen to be disabled. But we shall return to that later…

The biggest worry – given the Warwick Road area of Carlisle’s history of serious flooding in recent years – was whether or not the game would go ahead at all. But it did – and Blues fans were probably praying for the heavens to open and Noah to appear over the horizon long before half time in order to have it abandoned. In the first half, the visitors played like the home team, with United playing exclusively on the break. The Shrimps swarmed all over the men in the blue shirts from the off and the game was played almost exclusively in the United half. The Shrimps looked sharp; they looked incisive – they looked like a really good team. With eleven minutes played, A-Jay Leitch-Smith only just missed with a shot which whistled very close to Adam Collin’s left-hand post. A minute later, though, and Barry Roche was also forced into action and could only parry a shot from Ashley Nadesen – his fellow Carlisle forwards were far too slow to react to the loose ball. Not so at the other end… 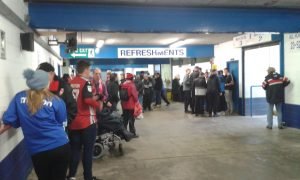 With quarter of an hour on the clock, A-Jay picked up the pieces after Collin had done brilliantly to block his first strike and swept it past the man in yellow to put the visitors nil-one up. At the other end, Richie Bennett was thwarted by a fantastic block by the resolute Morecambe defence after twenty minutes. Carlisle came even closer with twenty-three minutes played, when Nadesen hit Morecambe’s left-hand post with a tremendous header from Jerry Yates’ cross. With 26 minutes played, however, Vadaine Oliver scored with an absolutely TOWERING header from a corner to put the team from Lancashire even further ahead. Well played that man. There were half-chances for both teams before the break but the visitors went back to the Dressing Rooms deservedly in the lead.

The second half was a different story, though. United had the majority of possession and most of the chances as well. Big Baz yet again earned his corn after about fifty minutes, reacting really athletically to leap to his left and deny Jack Sowerby. Then – shortly afterwards – the big Dubliner used his legs to block another shot from close-in, this time by Nadesan. But, try as they might, this was the closest the home side came to closing the gap on Morecambe. A combination of poor shooting; profligate possession and over-hit dead balls undid whatever John Sheridan had encouraged his men to do. At the end of the match, it was a relatively routine win for the Shrimps.

The win pushed Morecambe up the table to seventeenth. Carlisle, meanwhile, failed to register either a win or any goals for the fourth home game in a row. Their alarming lack of form saw them fall to eleventh in the table. It’s hardly a crisis – but it must be a worry. 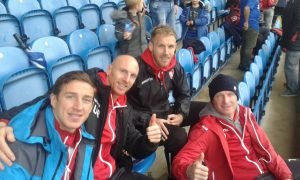 The scenes of my fellow supporters celebrating are memorable – it’s always good to win, particularly on the road. (Second Picture) But my own memory of this match will be of this:

Here we have young man Jordan in the wheelchair and long-term carer Sam under the umbrella. On wet seats. In the pouring rain. This is Carlisle United’s offering for disabled away fans.

It is a disgrace, full-stop.

As Sam said to me at the end of the contest: “How much does a piece of Perspex cost?”