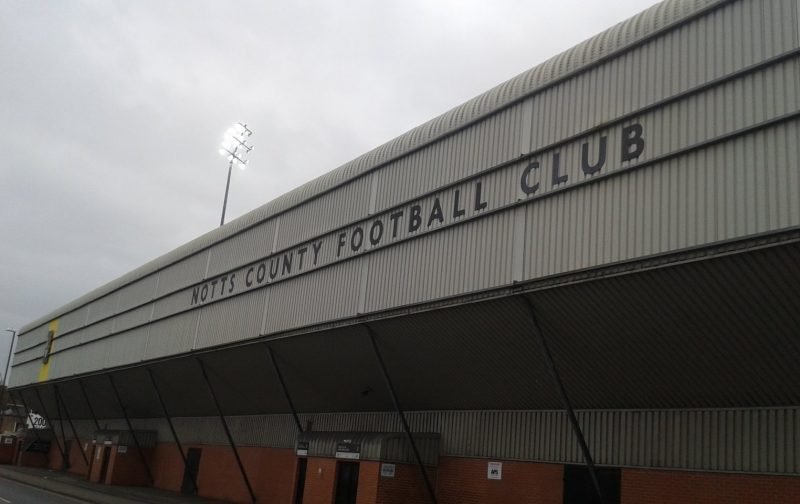 Morecambe arrived at Meadow Lane today looking to make it three games in a row against a team desperate for points right at the bottom of the EFL. Notts County, though, had surprised almost everyone in the football world by winning 1-3 against Carlisle at Brunton Park last Saturday. In previous meetings, the Shrimps just has the edge over their hosts: five wins and four losses in thirteen previous meetings,  according to the match programme.

There was a lot for the home team to play for, given the gradual improvement of rivals Macclesfield and the dramatic turnaround of Port Vale (two straight wins) in recent times. Anything other than a win over the visitors from Lancashire for Neal Ardley’s team would leave them marooned in the relegation places with time as well as games now beginning to run out. They started the game in twenty-third.place, just two points better-off than Macclesfield but having played one match more than them. The Shrimps, on the other hand,  were in nineteenth place, with a whole nine points more already in the bank.

It was grey and very WINDY when the game kicked-off. I was about to say that the wind spoiled it. But that’s not true. From County’s point of view, the twin facts that their confidence is clearly shot plus the fact that they wouldn’t have scored if they kept playing until next Saturday didn’t help. Having said that, though, if visiting goalkeeper Mark Halstead hadn’t pulled off a quite phenomenal double save early in the second half, the Magpies would have won. It was the best chance of the entire dreary ninety minutes. The other thing that spoilt it was the Referee. I don’t mean to be rude but Kevin Johnson is simply not physically fit enough to be refereeing at this level. There is simply far too much of him for the load to be moved at speed up and down a football pitch. Consequently, he was unable to keep up with play and his decisions were therefore erratic and frequently just plain wrong. The players on both sides didn’t help him in this regard – there was far too much play-acting, backchat and telling tales on each other for my liking throughout the entire dismal affair and the Referee did far too little to put a stop to it.  I rarely question Morecambe Manager Jim Bentley’s tactics but for me today they were both overly negative and far too defensive. County was a team ripe for the taking. And every time the visitors put any sort of pressure on them, the Pies looked shaky and disorganised at the back.  But – for whatever reason – instead of getting on to the front foot,  Morecambe continually dropped-off and invited Notts back onto them. They could – and should – have won this fixture and it seems to me that only a total lack of ambition stopped them doing so. Richie Bennett spent far too much time trying to con the Ref and wasting his breath whingeing to him rather than actually getting stuck-in. Kevin Ellison had a poor game and contributed little. Jordan Cranston regularly gave away the ball and silly fouls in equal measure. Only Aaron  Collins up front looked like he actually wanted to win the game and it was no surprise that it was his shot which was the only one to seriously test Ryan Schofield in the home goal: he produced a fine save low to his left during the second half.  Other than that, this was a simply DREADFUL game of football: niggly;  bad-tempered and virtually totally lacking in any guile or skill. Notts looked doomed and the Shrimps were no better. Kick and rush; hoof and hope; it was AWFUL.  And to see Morecambe blatantly wasting time at the end in order to cling onto a single point made you actually cringe. Neither side deserved to win this game: and if it was possible, neither should have been awarded any points either.  The bore-draw saw County slump right to the bottom of the EFL pile. Macclesfield won 0-2 at Yeovil to drag the Glovers even deeper into trouble; Port Vale drew and Cambridge didn’t play. Morecambe’s single point saw them remain in nineteenth position. The only positive thing that can be said about today’s dreary proceedings is that at least they didn’t lose.