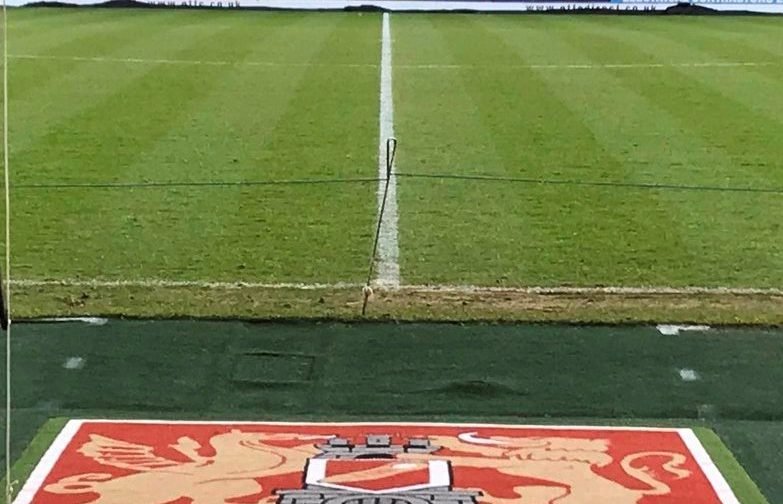 Morecambe visited Northampton Town today for an early kick-off on the back of a continuing crisis on and off the field. On it, Manager Jim Bentley’s frank admission that he felt under pressure after last week’s home defeat to Stevenage has led to further calls among some Shrimps’ fans for him to be sacked. He said “What can I do about it?” during a radio interview straight after the game. Some people have interpreted this remark as a refusal to take any responsibility for his team’s performance on the day. Stevenage won with their only strike on the Morecambe goal during the second half during the fourth minute of added time with an unchallenged header from a corner. Jim blamed his own players for this and failing to concentrate for the entirety of the game. Pointing out that he realised that the blame ultimately lies at the Manager’s feet for lapses like this, however, he added: “It all lies at my toes which, as I said to the players, is a little bit unfair because they have got to accept responsibility as well.” He has been slated online for saying this: the point has been made more than once that one of the Dark Arts of Management is to keep all internal criticism In-House for risk of alienating the Managed with public utterances of this sort. These, the theory goes, in turn can drive a wedge between the person supposedly leading and those theoretically being led. On a less critical level, though, others have interpreted Jim’s observation  “What can I do about it?” as not so much evidence of personal despair but rather the setting- up of a rhetorical question which he then attempted to answer himself as the interview progressed.

Whatever might be the truth, some other things which the Manager could – but didn’t – blame for the predicament his club currently finds itself in and which he personally has little or no control over have remained the same since the defeat to Stevenage. The team have had no reliable location at which to train and the injury list of the smallest squad in the Football League has shown no signs of being ameliorated by further contracts – on-loan or otherwise – for newcomers.

Either one of these things would hamstring any Manager’s ability in any football context anywhere to improve the performance of any team. But the new owners of Morecambe Football Club say absolutely nothing about it in public at least. Maybe they are actually practising the Dark Art of Management just referred to. But there again, their deafening silence about two of the basics of any footballing strategy – a transfer budget and somewhere for the team to train – makes you wonder what is really going on behind the scenes at Morecambe Football Club. Looking on the club’s website and this week’s Newsletter, the only evidence of any interaction at all between the people who run it and its fans is a poll to choose next season’s first team kit. Not a word about new players. Nothing about where the team are supposed to get ready for competitive games to ensure there is actually going to be a team or even a club for this new kit to adorn.

Today’s hosts of Jim Bentley’s side are themselves no strangers to even murkier goings-on behind the scenes.

Northampton Town – along with Leyton Orient and Chesterfield plus Notts County currently – provide a salutary lesson to anybody how business should not be conducted off the field at a football club. Since Chris Wilder departed for Sheffield United a couple of years ago, the club has endured turmoil on the field. Back in November 2013, when Chris was still in charge of the Cobblers, the club were on the brink of collapse off it as well. They found themselves within 24 hours of being wound-up altogether as a result on an unpaid tax bill during November. The Manager and his staff had not been paid since September and the players relied on the Professional Footballers’ Association for their wages. Ring any bells? A loan of ten and a quarter million pounds which the local council had made to the football club was largely unaccounted for and improvements to the ground which this loan was supposed to pay for remained unfinished. Yet –against all the odds – Wilder steered Town to the pinnacle of League Two and they were promoted as champions at the end of that season. His words at the time are well worth repeating:

Today, the former Manager is long-gone and the club have struggled ever since he departed. Northampton – relegated from League One last season – were sixteenth in the League Two table prior to today’s clash. Off the field, the financial scandal of five years ago still rumbles on, with the previous owner and his son, the former Chairman, being ordered by the High Court in Birmingham to repay £2.1 million of the Council loan this very week. Sentencing the pair, Judge Simon Barker QC said that in his opinion, the former Chairman `believes that lying and suppressing the truth is part and parcel of doing business’. The rest of the £10.25 million loaned to the club disappeared when the company which received most of it almost immediately went into administration.

Elements of all this sound alarmingly familiar to Shrimps’ fans. It is a lesson from the past and a warning for the future, potentially at least…

From the future back to the past now. In previous meetings, Town had only lost two of fifteen matches and drawn four against Morecambe. One of these defeats, however, was last August at the Globe Arena, when the Shrimps’ got their first points on the board this season after three straight League defeats. Relatively new Manager Keith Curle summed-up the task facing his players today by damning his opponents with very faint praise:

“I think the biggest strength that Morecambe have got is that everybody expects you to beat them.”

If this is a strength, I struggle to imagine what a `weakness’ might be. Would Town beat them, though?

It was cloudy but dry as the match kicked-off at Two o’clock. With defenders Steven Old and Luke Conlan both relegated to the bench for Morecambe, Jim Bentley was able to welcome back striker Vadaine Oliver from injury.

The first chance occurred after nine minutes when Jack Bridge did well on the Northampton left before slinging over an excellent cross which Junior Morais headed virtually straight at Mark Halstead in the visitors’ goal. Up the other end, Kevin Ellison tried his luck with a shot from a tight angle after nine minutes which narrowly missed the target. The first time home goalkeeper David Cornell was called into action was with just over a quarter of an hour played: he dealt capably with a long cross from the Morecambe right aimed at Richie Bennett. It was down the opposite end next as Joe Powell tried a long shot at goal with eighteen minutes played but Halstead was again equal to it.  From a corner to the visitors a minute later, Sam Lavelle drew a save from Cornell with a header. His opposite number was forced into action immediately afterwards and did well to keep out a shot before debutant Timi Elsnik slammed the loose ball past him to put the Cobblers one-nil up as the Morecambe defence failed to clear their lines and the ball pinged around their penalty area. The closest the team in the blue strip came to equalising in the first half was when Andrew Tutte forced an excellent save from the Cobblers’ goalkeeper with just over half an hour played. Halstead exceeded this in the thirty-sixth minute, though, when he did very well to stop a fierce Sam Hoskins’ shot from a position where the Town player might have done better. The same player was then guilty of a bad miss just moments later when he missed the target altogether. For the visitors, Rhys Oates unleashed a thunderbolt of a shot on goal after 36 minutes which seemed certain to bulge the net until it hit team-mate Bennett instead. There were further half-chances for Hoskins and scorer Elsnik for Northampton and Jordan Cranston for the Shrimps but the half ended one-nil in favour of the hosts.

The Cobblers started the second period on the front foot and forced a corner after a minute before obliging Halstead to push away a cross from Aaron Pierre which seemed destined for Morais’ head in the 47th minute. With fifty-two minutes on the clock, though, Kev made a good run down the Morecambe right and slotted a low cross right across the field which Bennett swept home at the far post to open his account for the Shrimps. The home team increased the pressure after conceding the equaliser but the visiting defence held firm and Halstead wasn’t tested during the next twenty minutes or so although Hoskins came close with a fierce twenty-yard strike after an hour which bulged the side netting. In fact, the Shrimps came closest to scoring next after 64 minutes when Vadaine Oliver was quickest to react to a loose ball in the Town penalty box – Cornell did well to get down low and palm his shot away.  Cranston’s effort for the visitors after 69 minutes was blocked and Oates only just missed the goal from the resulting corner with the home goalkeeper nowhere near it. Oliver then got the ball in the net from Tutte’s cross with seventy-three minutes played but was belatedly flagged off-side.  Tutte chanced his arm himself after 83 minutes but his free-kick from a good position was blocked by the Northampton wall. Five minutes later, substitute Liam Mandeville also had a good chance but his shot from Vadaine’s clever flick went wide when he really should have at least hit the target. Hoskins then had another low pop from about twenty-five yards out right at the death but Halstead again did well to save the ball and hold onto it. And that was it.

There was good news and bad news for Jim Bentley at the end of the game. Vadaine Oliver impressed on his return and looked as if a partnership with new boy Richie Bennett might pay dividends in the future. As far as the performance was concerned, Morecambe were the better team particularly in the second half and with a bit of luck or better finishing might have actually won it. Also, not a million miles away, strugglers Cheltenham Town were losing two-nil at home to keep them level on points with the Shrimps and deeply in the mire. The bad news, however, was that Cheltenham’s victors were Sol Campbell’s rapidly-improving Macclesfield Town. The Silkmen thus leap-frogged the Shrimps into twenty-second place in League Two. So, if the season ended today, Morecambe would be relegated: only Notts County currently lie between them and the wilderness of the National League.