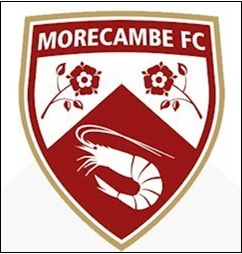 Morecambe kick-off their first-ever season in League One as the bookies’ favourites to be relegated at the end of the campaign. Nothing new there then – the Shrimps have been tipped for a quick return to the non-league wilderness ever since they entered the EFL way back in 2007. Under Derek Adams, they were favourites to be relegated last season as well but Derek took them to the Promised Land of promotion instead via the Play-Offs against Newport County. Derek has taken a step backwards to take over the reins at Bradford City to be replaced at the Mazuma Stadium by former Motherwell Manager Stephen Robinson. Outstanding performer Yann Songo’o went with Derek and the phenomenal young talent that is Carlos Mendes-Gomes has also departed to Luton Town. Perhaps the most improved player at the club – John O’Sullivan – has also departed for Pastures New in the shape of local League One rivals Accrington Stanley.

However, Ulsterman Robbie has wasted no time stamping his own personality on the club. He has signed – permanently or on loan – fifteen new players. These range from goalkeeper Jökull Andrésson, who performed brilliantly for the Shrimps during a short loan spell last season; keeping two clean sheets into the bargain. He has signed on a season-long loan from Reading. At the back, Irish internationals Anthony O’Connor, Shane McLoughlin and Ryan Delaney will join forces with Greg Leigh, Jacob Mensah and Ryan Cooney, who was given a permanent contract after having been on-loan from Burnley for the last two seasons.

Midfielder Alfie McCalmont has been signed on-loan from Leeds United for the season. He will be joined by Callum Jones, who is also on-loan from Hull. Adam Phillips will be welcomed back by most Morecambe fans for another loan spell from Burnley for the third year in a row. Let’s just hope he doesn’t go to warm the substitutes’ bench elsewhere as he suddenly did at Accrington last season.

Up-front, winger Josh McPake has been signed on-loan from Glasgow Rangers where he will be joined by permanent signings wingers Jacob Mensah and Arthur Gnahoua, Kenyan international Jonah Ayunga and former Walsall star striker Wes McDonald. The ex-St Mirren forward Jonathan Obika picked-up a serious hamstring injury in a recent friendly against Burnley and will be out until Xmas.

So it’s All Change at Morecambe for their exciting new campaign at the highest level the club has ever played. Can they confound the Bookies’ pessimistic predictions yet again?