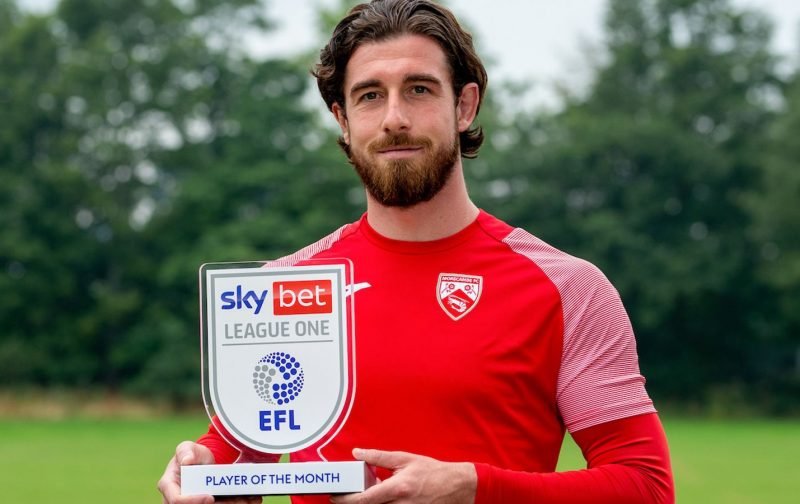 Phoenix club AFC Wimbledon visited the Mazuma stadium today with the very enviable record of being the team which has scored more goals than any other in the entire EFL: eighteen so far in all. Having said that, they were only tenth in the League One table, having drawn three and won only one of their last five games. This was last Saturday, when they walloped much-fancied Oxford United 3-1 at Plough Lane. In previous meetings with the Shrimps, the Dons had slightly the worse of things, having drawn three and lost four of ten previous League Two fixtures. Mark Robinson – Wimbledon’s Head Coach – said prior to today’s eleventh meeting:

“Morecambe are doing very well. They are really hard-working but they also do things on the ball that make them a real threat. They have got some good players with good movement, particularly when they get into the final third. We will be aware of that, but fundamentally they are really hard-working, so we know that we’ve got our work cut out, but it’s another game we are looking forward to.”

Morecambe, in contrast, were five places lower in the table and two points behind their visitors, albeit having played one game fewer. They have won two and lost two of their last five league matches. Stephen Robinson, the Morecambe Manager, expressed his view of the task facing his men today in these words:

“I’ve watched Wimbledon numerous times now. They are a good side. They are very well coached; you can tell that. They change formations; they have some very good individuals. I think they are a similar team to ourselves but these are the games that really matter: your Sheffield Wednesdays and Ipswiches: they are bonus results; these are the results that really count in the season at the end of it.”

The Transfer Window has closed since last time Morecambe played – and club Captain Sam Lavelle disappeared through it. He has signed for League One rivals Charlton Athletic for an undisclosed fee ten months before his contract with the Shrimps was due to expire. In an Instagram message, Skipper Sam wrote:

“Its been an emotional day leaving a club that means so much to me and my family. Morecambe has been not only such a big part of my career but my life as well and I’ll be forever grateful for everyone at the club who’s helped me develop as a player and as a person. I’ve loved every single minute. I want to thank all you fans for the indescribable backing and support you’ve given me for the last 4 years. I hope you can understand my decision and I’ll 100% be back one day.”

Good luck to him. He – and his dad Ben before him – have been fantastic servants to the club both on and off the field, where the Club Captain has played an active and really positive role in the community. For his sterling work, he has been awarded the Professional Footballers’ Association’s Community Champion Trophy both this year and last. Sam’s involvement in community issues in a time of a Pandemic has been picked up by a statement on Facebook by club administrator Stuart Rae:

“It’s leadership off the field that makes him so likeable for me, and what I think we’ll miss the most. Be that the way he continues to recognise and remember former teammate Christian Mbulu, arranging payments from the squad to some club employees that faced wage cuts during COVID-19, how he discreetly and respectfully contacted friends of supporter Adam Robson following his passing to forward the squad’s sympathies, or going out of his way to sign autographs and pose for pictures with young fans…. He just went above and beyond, and things like that shouldn’t be forgotten or overlooked. Amen to that. Sam Lavelle is a tremendously talented prospect who has always displayed a maturity far beyond his years. His are big boots to fill and he will be very badly missed. In other transfer news, Kelvin Mellor has also left the club and is now a Carlisle United player. Good luck to him too.

Someone who doesn’t seem to need any luck at the moment is Cole Stockton. Morecambe’s outstanding centre forward has won both the league One Player of the Month award for August as well as the award for the best goal for his tremendous first effort against Ipswich on the opening day. He was leading the line again today but there was a welcome return from long-term injury for Aaron Wildig.

Wimbledon entered the game on the back of a publicity launch for a group called Fair Play at Plough Lane this week.  Given their own experience of having their heart and soul devoured whole by the so-called MK Dons, Wimbledon are trying to lead the way for fans to take more control of their clubs right across Britain. Andy Burnham was involved because of his involvement as Mayor of Manchester with Bury FC – who have suffered a similar fate to the original Crazy Gang, albeit for different reasons – and further details of the group can be found here:

The weather had been variable in North Lancashire before the game. It was overcast most of the time but then the sun would break out briefly. As the players warmed-up, though, black clouds being blown across Morecambe Bay from Cumbria – where it was clearly raining heavily – finally arrived to soak everybody on the pitch.  Both teams Took The Knee just before kick-off and it soon became apparent why Wimbledon score so many goals. Right from the off, they were looking to play on the break, using the ball intelligently and passing their way up the pitch rather than doing any of the kick and rush stuff the old Crazy Gang was notorious for. Just five minutes were on the clock when Depo Mebude was badly fouled on the left hand edge of the home penalty area from his point of view. Two Wimbledon players shaped-up to take the free kick before Anthony Hartigan decided to have a direct shot at goal. From an acute angle, he swerved the ball straight into Jökull Andrésson’s top left corner. One-nil to the Dons and a poor goal to concede at that: the young Icelander should have saved it. The visitors continued to play some slick, quick football and seemed to be just a tad too quick for our lads, too many of whom looked slightly off the pace to me. Slightly irritating Wimbledon Captain Alex Woodyard walloped the ball over the Morecambe bar following good interplay between two of his team-mates after seven minutes. A clearly rehearsed Morecambe routine where the goalkeeper played the ball to Captain O’Connor to his right presumably for the skipper to work the ball up the field was constantly frustrated by committed Dons’ pressing but the team kept persevering with a ploy which never paid any dividends. Alter fourteen minutes, however, visiting goalkeeper Nik Tzanev earnt his corn with a good save from Arthur Gnahoua. The visitors had the next really good chance though: out of nothing, Henry Lawrence’s tremendous shot from distance only just missed Andrésson’s left-hand post after 36 minutes. Right at the death, Morecambe’s loanee goalkeeper redeemed himself somewhat with a double save first of all from Mebude – which he didn’t know much about – but then brilliantly on the follow-up from Ayoub Assal. The latter player was booked for diving a little while after this – and to be fair, Referee Sebastian Stockbridge (who made a lot of mistakes today) certainly got this one wrong. So half-time arrived with the visitors both on top and deservedly in the lead. Their travelling support were a credit to the club first of all for turning-up in their hundreds and also for noisily encouraging the men in the yellow strip for most of the game.

Stephen Robinson changed the shape of his team for the second half. Defender Liam Gibson was taken off and winger Wes MacDonald was sent on. And the change certainly worked. From being a goal down, the Shrimps turned the game on its head within ten minutes of the restart. The Dons looked as if they were in danger of being swept away by a red deluge as the home team repeatedly pushed them back right from the off. With Gnahoua far more assertive than he had been in the first period on the right, the visitors found themselves having to defend properly for the first time in the match. They weren’t very good at it. After just four minutes, Aaron Wildig played-in Cole Stockton for Morecambe’s goal machine to imperiously score his seventh goal of the season with a tremendous shot which beat Tzanev all ends up. As Wimbledon’s defence was still at sixes and sevens, an unmarked Shane McLaughlin scored with a tremendous diving header against his former employers from another brilliant Arthurian cross from the Shrimps’ right with fifty-four minutes on the clock.  Wimbledon rode out the storm, however. You always had the feeling that they could get themselves back into this game if only because they refused to ever play on the back foot. And so it proved. Alarm bells rang after an hour as Mebude again only just missed with a tremendous low shot from a long way out. Almost immediately, Lawrence went on a run down the Dons’ left and – as the Morecambe defence backed-off and allowed him to do it – found Etan Chislett in the middle who made no mistake with a tremendous half-volley.

All afternoon, it was noticeable that Dons’ goalie Nik Tzanev liked to amble up the field when the ball was at the other end. Sometimes, he was almost in the centre circle and you feel that any goalkeeper who does this is asking for trouble. So when Cole the Goal got the ball just inside the opposition half after 65 minutes, turned and unleashed an immediate and brilliant lob from all of 45 yards, there was only going to be one result. It was a simply sublime strike and good enough to win any game of football at any level. But Wimbledon still wouldn’t lie down. From a free-kick on their right after 72 minutes, an unmarked Will Nightingale made it three goals in three games as well as three goals each with an assured header. Again, it was a poor goal to concede. But it got even worse in injury time. The hosts conceded another spot-kick: a corner this time; their marking was all over the place and a gleeful Assal smashed a loose ball home to send Wimbledon’s travelling support into ecstasy.

Nobody could say they didn’t deserve it. This was a tremendous game of football played in a good spirit and where both teams wanted to attack – and found defending problematic. Morecambe need to tighten-up at the back, where Sam Lavelle’s calming presence was sorely missed today. Wimbledon could defend better too – but if you continue to outscore the opposition in the way they did today, I don’t suppose it matters that much, does it? The Londoners’ win pushed them up to fourth in the League One table this evening, ahead of the hated MK Dons (Booo!!!) on goal difference. Morecambe slipped to eighteenth. But they will play worse this season – and win.