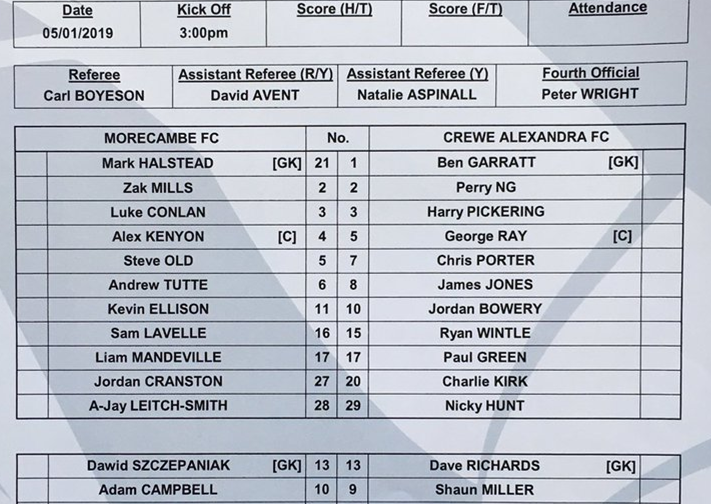 Before we start, here’s a quote from one of the editors I work for which is particularly relevant to today’s fixture:

Happy New Year. Thank you for all your work in 2018, it was very well received (unless you live in Crewe).

Don’t get the reference? Then you obviously haven’t read this:

Local BBC Radio Stoke – in its infinite wisdom – said this `bonkers’ piece was pure `sour grapes’. They hadn’t actually read it but they knew more about my article without reading it than I ever will as the author. How do I know this? Because they told me so when I complained about it. But they’re the BBC after all – and they never get anything wrong, do they?

But Morecambe equally certainly didn’t get anything right on the opening day of the season at Gresty Road: in a literally pathetic display, Jim Bentley’s latest configuration of rejects, loanees and youngsters lost six-nil. So there wasn’t just pride to fight for today against the team managed by Jimbo’s fellow Central Defender at Christie Park: David Artell. Dave had steered Alexandra to fifteenth position in League Two – five places and five points better-off then the Shrimps – before kick-off at the Globe Arena today. In past meetings, Crewe have the far better record than Morecambe with seven wins out of eleven games; just one match drawn and on a run of three victories in a row before today’s contest. The team which featured today all had some role to play in August’s mauling of the Shrimps. For Jim Bentley’s side, Paul McKay has signed on-loan until the end of the season from Cardiff City – and he went straight onto the bench.

It was a very different day at the North Lancashire seaside than had been the case on New Year’s Day. Then, it was sunny and quite mild. Today, it was misty, dark and very cold, albeit almost windless. With a large visiting support noisily cheering them on, Crewe – in an all-white strip – were on the back foot in the opening moments of the game. After nine minutes, Liam Mandeville played-in A-Jay Leitch-Smith to beat Ben Garrett in the visitors’ goal but Alex Captain George Ray saved the day with a fantastic clearance off the goal-line. A minute later, Perry Ng’s loose pass was picked-up by Mandeville himself and he strode towards the edge of the Crewe penalty area and let fly with a shot which went narrowly over the bar. But after their shaky start, the visitors had the next half-chance after fourteen minutes: James Jones set-up Ryan Wintle but his shot from all of 20 yards missed the target. A-Jay had to retire injured with twenty-six minutes played and The Alex took advantage just a minute later. Playing on the break, they worked to ball to Ng who crossed for Jones to take a shot which was deflected to the left of a helpless Mark Halstead in the home goal to put Crewe into the lead. This prompted Morecambe to start to apply more pressure again. Jordan Cranston missed with a trade-mark long-range shot with just over half an hour played and then Kevin Ellison must have thought he had equalised when he lobbed Garrett and the ball seemed to be dropping into the Crewe net. But there was that man Ray again to head the ball away from right under the crossbar. Alex had the next chance after 38 minutes as Ng played his way into the Morecambe box and unleashed a low shot which Halstead saved low down. A minute later, the Shrimps’ goalkeeper dropped a cross and `Jonah’ Jones poked the ball over the bar when he probably should have done better. So the visitors could have gone back to the Changing Rooms two goals up: they would have been happy with their slender lead if only because the home team had dominated most of the play.

And so it continued during the second period.  Oates beat Nicky Hunt for pace on the wing before unleashing a scorcher from a narrow angle which Garrett saved well after 51 minutes. The team from Cheshire then struggled yet again to clear their lines: as Ellison and Oates both tried to bundle the ball home from a left-wing cross, you-know-who appeared for a third time to clear the ball away from danger.  With the home team properly on top, Kev tried a clever curler after an hour which only just missed the target. Straight after this, Oates found himself one-on-one with the visiting goalie but put his effort wide. However, Referee Carl Boyeson pulled the play back for a foul on our Number Eleven in the build-up to this miss. From this, Andrew Tutte swerved a tremendous shot out of reach of Garrett and into the top corner of the net to put the teams level again: it was a tremendous strike.  As Morecambe continued to play all the football, Liam produced a less impressive effort after 71 minutes; his side-footed effort went right over the roof of the stand. Then Oates drew a regulation save from the Alex minder three minutes later. It was 78 minutes before Crewe had their first attempt on goal: Ainley forced a save from Halstead with a low shot. Two minutes later, `Jonah’ belted a shot towards the Morecambe goal but it was deflected away. But Kev wasn’t to be denied his part in this drama much longer:  84minutes were on the clock when he produced one of his very special efforts to smash a thunderbold past a helpless goalkeeper from the edge of the penalty area into the top corner. So Morecambe finally had what their more positive approach to the match fully deserved: three precious points firmly in their grasp  with only a few minutes left to play. But – not for the first time this season – they yet again failed to see the game out. With almost the final action of the game, in the fourth minute of added time, Zak Mills committed a needless and frankly stupid foul in the Shrimps penalty area on Chris Porter. Porter picked himself up and duly smashed the ball home to win a point his team were probably not expecting to take back south with them. So, yet again, Morecambe threw the towel in from a winning position: it must have felt like a defeat in the Changing Rooms afterwards.

With Yeovil and Macclesfield both losing at home, however, the last-minute capitulation wasn’t as bad as it might have been. The Shrimps remain in the magic twentieth position, six priceless points clear of the Drop Zone. Three points today would have put them level with Cheltenham and Port Vale but it wasn’t to be. At least they didn’t lose; nor did they endure the humiliation of a fourth defeat in a row by Dave Artell’s men.