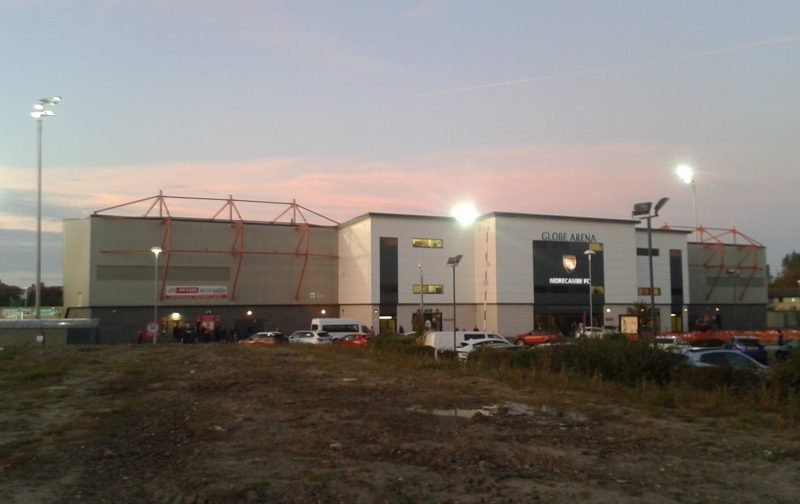 Macclesfield Blown Away at Morecambe

Macclesfield Town travelled 78 miles to Lancashire to renew an acquaintance with Morecambe this evening which stretches back to September 1968. Then, what were to become the first Champions of the newly-formed Northern Premier League hosted the Shrimps at Moss Rose for a two-all draw. Since then, they have played each other sixty times altogether in the NPL, Conference and League Two. The Shrimps have won twenty of these (including their first win of the season in Cheshire last August) and the Silkmen twenty-six.

In recent times, Mark Kennedy’s men have lost two of their last five games and won only one – an identical record to tonight’s hosts. They managed a commendable draw at Leyton last Saturday, however, with a goal in last-gasp injury time. Their season, infamously though, has been overshadowed by problems off the pitch. They have already had six points deducted by the EFL for various misdemeanours and among various other setbacks saw four of their better players leave last month after they took the club to a tribunal. So Macc arrived fighting for their lives in twenty-second position in League Two and with just two points more than tonight’s opponents and seven more than rock-bottom Stevenage. For the Shrimps, Carlos Mendes-Gomes was absent tonight due to illness. Macclesfield, meanwhile, gave a debut to new signing Ben Tolitt at the beginning of the second half.

On a cold and very windy evening, Morecambe went straight onto the front foot. In the very first minute, Aaron Wildig only just failed to get on the end of Adam Phillips’ dangerous cross in front of the visitors’ goal. And in that goal, Derby County loanee Jonathan Mitchell was struggling to clear his lines as he kicked into the gale right from the off. He was forced into action after nine minutes, doing well to get down low to keep out Cole Stockton’s venomous low shot at the expense of a corner. With the wind a significant factor in the game, at one point in the game his opposite number took a kick which travelled the length of the pitch and almost caught him out. But he was completely caught-out with almost twenty minutes played when a long throw found its way to Toumani Diagouraga and he gratefully opened his account for the Shrimps by lashing the ball home from close range as the visitors failed to clear their lines. The next chance fell for Macclesfield though. A minute or so after falling behind, Arthur Gnahoua received the ball from a corner but out his attempt went over the bar as Shrimps defenders stood on the goal-line to reduce the target he had to aim at. The home team when straight up the other end and Phillips found himself one-on-one with the Silkmen’s goalkeeper with 25 minutes on the clock. He rushed his subsequent shot though and fired into the side netting. Ten minutes later, the hosts doubled their lead. John O’Sullivan set-up Wildig with a headed knock-down and the midfielder’s instant shot took a wicked deflection which took it past Mitchell into the net. As Morecambe continued to dominate the play, O’Sullivan tried his luck with a rasping shot two minutes later and only just missed as the ball flew over the bar.

So – for once – the Shrimps found themselves comfortably in the lead at the end of a first half. Macc probably considered themselves lucky to not be even further in arrears but knew that in the second period, the strong wind would be in their favour.

Would it make any difference?

Mark Kennedy shuffled his pack with a double change at half time and Macclesfield had the first chance of the second half. They had a shout for a penalty after just three minutes when a Morecambe hand may have blocked an effort from Spurs’ loanee Shilow Tracey but Referee Michael Salisbury gave nothing. They had another half-chance after 57 minutes when a half-volley from Connor Kirby slammed into the pitch and then bounced wide of the goal. Tracey tried his luck a couple of minutes later but his effort hit team-mate Joe Ironside. Danny Whitehead caused Christoffer Mafoumbi to fumble his long-range shot after just over an hour and the wind was literally in the visitors’ sails at this point. But try as they might, they couldn’t find the means to reduce the arrears. Substitute Donovan Wilson miscued a header from a Theo Archibald cross after 72 minutes. Then Kirby drew a fantastic save from Mafoumbi from a thunderbolt from 25 yards with just five minutes scheduled to play. But that was as close as they came and the Shrimps ended the game with a rare double and another precious three points in the bag.

The win meant that they leap-frogged Macclesfield into twenty-second position, albeit having played a game more. But the really significant result tonight came from Yorkshire. Bradford City beat Stevenage 3-1 at Valley Parade to ensure Borough’s stay at the very bottom of the EFL. Crucially, Morecambe moved a whole eight points ahead of them and at last are beginning to look as if they might be able to put some clear water between themselves and the chasing pack.