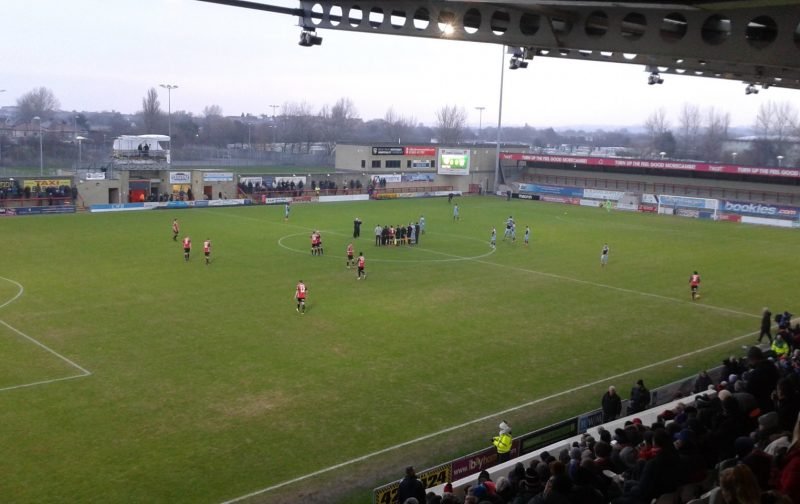 Does Fortune Really Favour the Brave?

Dino Maamria brought his Stevenage team all the way from Hertfordshire today to face Morecambe within sight of the snow-topped Lakeland hills on the far side of the Bay after which the club and the town are named. Well – that’s if you could actually see them: today, a murky, thin wet haze lay low over the water not too far from the shoreline on the Morecambe side of things.

The Boro were tenth in League Two prior to kick-off and probably buoyed by their 2-1 win against Crawley last Saturday. The previous week, however, they had gone down two-nil to struggling Cambridge so Shrimps’ fans would be hoping for a similar slip-up by their visitors in today’s contest. In previous meetings, the Boro have the Indian Sign over today’s opponents: they have won six of eleven matches in the past and lost to Morecambe only once ever.

For the visitors, ex-Manchester United and Cardiff City goalkeeper Oliver Byrne warmed the bench for the first time on-loan from Blackburn Rovers. For the Shrimps, 27-year-old forward Richie Bennett was signed on-loan from Carlisle United until the end of the season earlier in the week. He went straight onto the bench today, so desperate was Manager Jim Bentley for forward players given injuries and the failure of Jason Oswell – sold to Wrexham two weeks ago – to live up to the expectations Jim had for him in League Two. There was a milestone for a Morecambe player as well: Luke Conlan would be making his one hundredth appearance for the Shrimps today.

It would seem that the Boro won the toss at the start of the game, given that they elected to defend the home end during the first half. Given what was about to unfold, this seems to be their philosophy: take the rules and conventions as far as you dare without actually crossing the line. Four minutes had been played when Morecambe showed some deft approach play down the left followed by a cross which was deflected for a corner. The visitors forced the first save of the game, however, when West Ham loanee Moses Makasi tested Mark Halstead after six minutes with a shot which the Morecambe goalkeeper fielded easily. A minute later, Stevenage’s Michael Timlin lost the ball and then committed a very physical challenge on Luke Conlan for which he was lucky not to receive at least a yellow card. In the eleventh minutes, Jimmy Ball had an excellent chance to open the scoring for the visitors but he headed a superb cross from the Boro left straight at Halstead when well placed and totally unmarked. After this, the visitors enjoyed a purple patch, forcing two corners in rapid succession and provoking a number of blocks from a Shrimps team increasingly clearly playing on the back foot. Boro were playing with a purpose which Morecambe never came close to matching during the first half.

Young Rhys Oates played with his usual sometimes guile-less enthusiasm and Kevin Ellison occasionally with the wiliness for which he is rightly well-known. But Liam Mandeville – as is his wont – drifted in and out of the action like a ghost. A fine pass here, a clever feint there. But far too little of either. Is it a lack of confidence – or a lack of commitment? Only he could really tell you. Jordan Cranston’s delivery from corners was consistently poor: sending the ball in at too low a trajectory or overhitting it altogether. In fact, the only time Morecambe even vaguely looked like troubling Boro’s defence was when Andrew Tutte’s free kick from a central position hit the defending wall and spun away for a corner just before the end of the half.

Whatever, Stevenage’s control of the game brought them what they deserved from their domination of play so far: a penalty clearly given by the linesman after 25 minutes. Steven Old was judged to have tripped Makasi and leading scorer Ben Kennedy converted the spot-kick with aplomb to put the visitors one-nil up. By half time, they could have been even further ahead. With thirty-three minutes on the clock, Morecambe completely wasted a corner kick to set-up the visitors for a rapid counter-attack. If James Ball at the far post had taken more care with his header from a fantastic cross by Johnny  Hunt on the Boro left, the hosts would have been two-nil down. Towards the end of the first period, Stevenage keeper  Paul Farman went down when nobody was anywhere near him and needed prolonged treatment on the pitch only to apparently miraculously recover straight afterwards. This set a precedent for the second half: two more visiting players received treatment for ages as the visitors took every opportunity which arose to waste time at throw-ins, dead ball kicks and whatever else they could contrive to do.

Clearly, Dino the Manager was only too happy to hold onto what his team had during the second half. It wasn’t long before Timlim launched himself into another late challenge – from behind this time – as Cranston was showing him a clean pair of heels. But yet again, Referee Graham Salisbury did nothing. It was only when the man with the Number Four on his back committed another bad tackle that the Referee belatedly booked Stevenage’s most obviously feral player. His Manager quickly took him off after that, probably mindful that this gentleman was already lucky to be still the pitch. Morecambe’s Manager also quickly changed things early in the second half. Mandeville was taken off and Bennett made his debut. It may have been coincidence, but from this time on, the balance of the game seemed to swing increasingly towards the hosts. Morecambe suddenly started shading the possession and Ritchie Sutton had a shot blocked before Oates just missed with a fierce shot in the early part of the fiftieth minutes. Bennett had a perfect chance to mark his debut with a goal after 57 minutes but blazed his effort when well placed high over the bar. Farman was finally forced into action a minute later, scrabbling on all fours as he managed to deal with a scuffed effort from Kev as Boro struggled to clear the ball. But he was finally beaten with seventy minutes played when Kev’s deflected shot eluded him and ended-up in the back of the net. Then, with his fellow defenders gradually playing deeper and deeper in their own half, he played his own part in keeping the score down. This involved taking every conceivable chance to slow things down as his team tried to shut up shop and escape to Hertfordshire with at least a point.  His heart must have been in his mouth when Zak Mills seemed to be the recipient of a far more obvious foul in the same penalty area than had been given against Steven Old in the first half: this time, the linesman kept his flag down.

Maamria himself was shown a yellow card by the Ref late on in the game. I hope it was for encouraging his team to cheat but I don’t know. The upshot of this was that Mr Salisbury added-on a very conservative eight minutes of extra time at the end to make up for the negative tactics of a team clearly happy to settle for a draw. This is the absolute irony of this game. If the Ref had ignored the gamesmanship of the visitors, the match could have ended in the ninety-third minute. But in the fourth minute of added time, substitute Luke Wilkinson headed a winner for the visitors from a corner which was the first strike they had made on the Morecambe goal during the entire second half.

They say that Fortune Favours The Brave: in this case, that was absolutely not true. Stevenage aren’t a good team. The arguments which went on between themselves – a heated but clearly frank exchange of view between Captain Cuthbert and Bad Boy Timlin during the first half, for instance – didn’t look good. The tendency of goalkeeper and defenders to exchange expletives when calls weren’t made by the former and the latter didn’t shut-down opponents quickly enough didn’t help. Add to this the petulant response to being offered a training top by his Manager when Kennedy was substituted (he snatched the garment out of his Boss’ hand and threw it onto the ground). Even at the moment of victory, what looked like a general argument by the team against one of their own number ensued as they made their way ever so slowly back into their own half. All this makes you wonder what the state of camaraderie at this club actually is.

But a win is a win when all is said and done. Stevenage will probably end the season in mid-table mediocrity. The win today saw them rise to ninth position. But Morecambe found themselves just one point above old adversaries Macclesfield (winners against Oldham today) and a single place above the relegation positions. This is a very worrying time for Jim Bentley and a team which didn’t turn-up until the second half today: how long can they collectively get away with doing this?