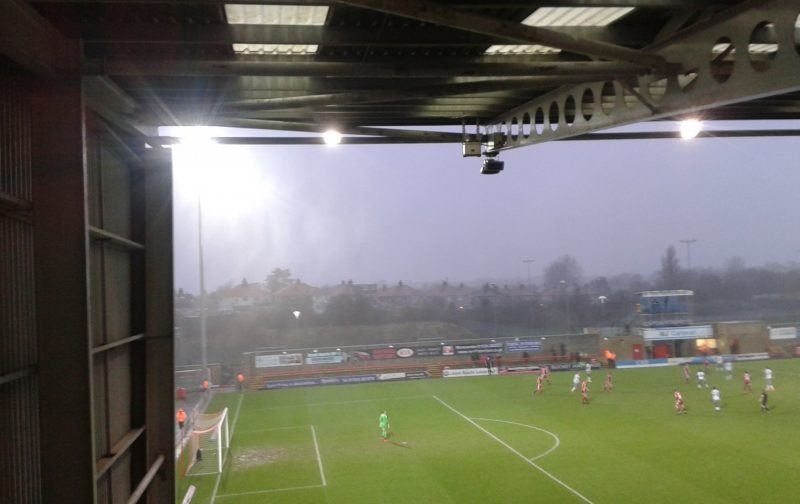 Morecambe Move Away From The Abyss – Again.

For Morecambe fans, it was like Xmas Day – or the start of any new season – all over again pre-match at the Globe Arena today. Shrimps’ Manager Derek Adams has signed Toumani Diagouraga and Jordan Slew on permanent contracts as well as taking duo Adam Phillips and Ryan Cooney on-loan from Burnley since last time the club played a competitive match. At the same time, Andrew Tutte and Adam Buxton have been transfer-listed. Derek has said about this:

“We’re looking to continue to strengthen but players need to move on. We’ve allowed a number of the younger ones to go out on loan or find clubs because what we’re trying to do is reduce the numbers. We have 32 players which is far too many – we had 28 but I added four to that last week.”

(They actually have 31 given the release of Joe Lynch after this statement was made. The nineteen-year-old has not featured in the first team since being signed from Crewe during the summer and Mr Adams clearly could see no role for him in the future.) The Morecambe Manager added the following analysis prior to the game:

“Colchester have done really well this season and have got themselves into a good position where they are attempting to get out of the league automatically. From that point of view, we know it is going to be a tough test for us but we have had a good week in training and will be looking to build on our really good performance at Bradford. We have had a bit of time to prepare for the game after a free weekend and the four new signings we have made in the window have had time to settle in. It is clear those signings have given us fresh blood and I think the players that were already here have upped their game as well which is always the reaction you want. The newcomers play in areas where I was particularly looking to strengthen the squad and we can look forward to them being involved at the weekend.’’

With rumours that impressive loanee George Tanner is about to return to Manchester United as the first stage in a permanent transfer to Derby County or elsewhere, not all the potential changes at the club are currently positive. Despite this, hopes were high among supporters of the EFL’s bottom club of a post-2019 bounce against a team Jim Bentley’s side beat on their own patch last October: one of only two away wins in League Two this season for the Shrimps so far. In their previous seven meetings, both sides have won once and drawn the rest. Morecambe went into today’s contest on the back of three straight defeats in their last five games preceded by a solitary win and another defeat before that.

The U’s arrived in Lancashire in eighth position in the division – right on the cusp of the Play-Off places – having not been beaten in their last five league games. They have drawn the last three and won the two before them. Disappointingly from Morecambe’s point of view, the last draw they had was against fellow-strugglers Stevenage last Saturday. Despite throwing the kitchen sink at ten-man Borough, United were denied by a brilliant performance by home custodian Paul Farman, the woodwork and clearances off the line throughout the ninety minutes. They couldn’t find the net – despite the best efforts of Stevenage defender Ben Nugent (who inadvertently deflected a team-mate’s attempted clearance against his own crossbar) and thus condemn the Shrimps’ closest rivals to bottom spot in League Two. Nevertheless, United Manager John McGreal and striker Harry Pell were both nominated for the EFL Manager and Player of the Month respectively for December.

It had been gloomy and very windy in north Lancashire before the game. On the way, it was impossible to see the Lakeland hills to the north across Morecambe Bay because of a  low-lying bank of grey clag hanging over the sea. When the threatened rain finally arrived – about half an hour into the contest – it was like a Monsoon sweeping across the ground from north to south.

On the pitch, though, Derek Adams chose to introduce all four of his new signings right from the off, albeit in front of a very disappointingly low crowd. The Manager was probably relieved to be able to name recently-injured central defender Sam Lavelle as his Captain today as well.  For me, right full-back Ryan Cooney immediately caught the eye. This lad can play and his clever feint on the Shrimps’ right after twenty minutes earned a deserved yellow card for Ryan Clampin for the crude challenge which brought the move to an end. In the middle, Toumani Diagouraga also caught the eye. He couldn’t fail to – he is a huge man. He made too many mistakes for my liking early doors but improved as the half wore on – you could see that this guy can play a bit as well. Jordan Slew linked-up with his new team-mates nicely and showed the occasional deft touch, with a fine turn and shot which went just over the bar with half an hour played for example. Adam Phillips also impressed and his shot from a free kick in a central position after a quarter of an hour went agonisingly close but just over the bar. As we shall see, this newcomer deservedly won the Man Of The Match award for his overall performance – and deservedly so.

However, John McGreal’s men weren’t here just to admire the non-existent view across the Bay. They looked well-organised and were ready and able to play on the break, where Kwamw Poku, Frank Nouble and Callum Harriot repeatedly looked a real threat. So it was no surprise when Ryan Clampin went on a marauding run down the Colchester left after 36 minutes and slung over a fantastic cross which Nouble turned brilliantly past Mark Halstead in the home goal. It was a fantastic strike which allowed the visitors to seek the no doubt very welcome shelter of the Dressing Rooms at half time in the lead. Having said that, it might have got even worse for the Shrimps just before the break, when a shot from a long way out by Harry Pell (otherwise noticeable solely because of his fluorescent orange boots) was deflected and only just missed Halstead’s left post with the goalkeeper going the wrong way.

Morecambe had the first decent chance of the second period. The always impressive Carlos Mendes-Gomes didn’t quite connect with the ball the way he would have liked when well placed and United Captain Luke Prosser was able to shovel his attempt away for a corner. This was after three minutes and eight minutes later, Slew weaved his way into the right-hand side of Colchester’s penalty area and unleashed a shot which Dean Gerken turned away for a corner with a strong right hand. It was a fantastic save which showed the agility and ability of a huge man to get down really quickly low to his right when he seemed to be moving in the opposite direction initially.

The visitors were playing some intelligent and progressive football, though. They tended to play tight little triangles between themselves as they advanced up the pitch but too often, the final pass was over-hit or given away. With an hour on the clock, though, they were unlucky not to have gone further ahead when Poku evaded two Shrimps’ defenders and slammed a shot against the foot of the post with Halstead desperately diving to his right and clawing at thin air. Almost before you could draw breath, Phillips took Carlos’ pass down at the other end and forced another good save from the U’s custodian before Slew put the rebound pretty wildly high of the open goal which gaped at him, albeit from a tight angle. Halstead was the next goalkeeper to earn his corn: he did really well to keep out Pell’s free-kick with sixty-six minutes on the clock.

I thought that the visitors were just about edging it at this point but Morecambe equalised after 68 minutes when recently-introduced substitute John O’Sullivan sent over a lovely cross from the Morecambe right which debutant loanee Phillips headed majestically into the net. Morecambe got on top after equalising and Ryan Jackson was booked for a really bad foul on Mendes-Gomes after seventy-four minutes.

To their credit, Colchester continued to play rather than settle for a draw. Nouble turned the home defence inside-out as he advanced up the United right after 76 minutes and Halstead again did well to save the shot he manufactured for himself at the end of his mazy run. There were just three minutes scheduled to play when Jackson had another lunge at Carlos – and brought him down. Referee Robert Lewis sent the Colchester defender off.

Ten–men United understandably tried to kill the game at this point but they could still have won it when Nouble drew a tremendous save from Halstead high up to his right with hardly any time left. In injury time, however, Phillips glided around the Morecambe left, looked-up and picked-out substitute A-Jay Leitch-Smith, whose instant volley went over the bar. So close…

In all truth though, a draw was probably a fair result. Colchester are clearly a decent team who like to play progressive football. Today, they were given a proper game by a side who are largely unfamiliar with each other and who visibly improved as the contest grew older. One swallow doesn’t make a summer but when that season comes around, Shrimps’ supporters probably have more hope tonight that their team will escape relegation to the National League than they have done all season so far.

The draw gave the Shrimps the single point needed to lift them off the bottom of the EFL given that Stevenage contrived to lose at home to Port Vale by the only goal of the game. Colchester, meanwhile, slipped to ninth. Don’t rule them out for better things at the end of the season, though: they play football the way it should be played.