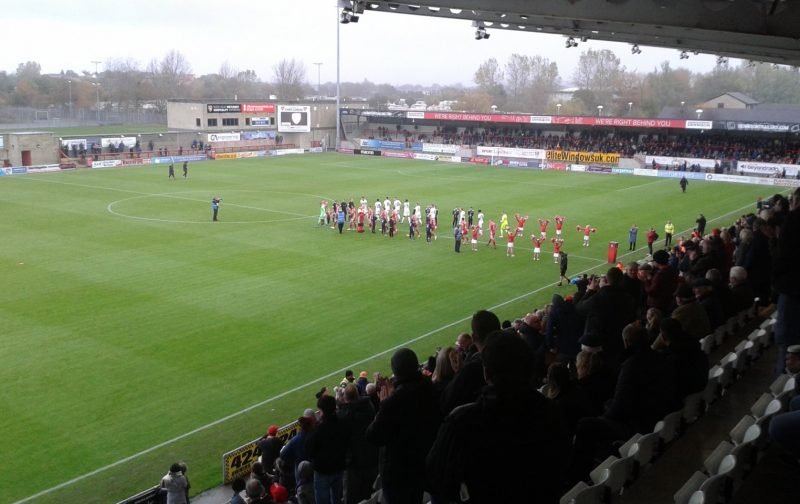 It’s been a turbulent week again at Morecambe Football Club. On the field, the team lost quite tamely to relegation rivals Stevenage to drop to the very bottom of the EFL last Saturday. Off the field, the longest-serving Manager in the Football League, Jim Bentley, decided that the time had come to cut his seventeen and a half year association with the club. Who can blame him? In his first interview as the new AFC Fylde Manager, Jim said the following about the way his position at the helm of the club had been undermined by one of the club’s owners:

“I’ve found myself really frustrated over the last twelve, eighteen months. I’ve always respected; been honest and had a good working relationship with the people who run the football club. That’s not been the case over the last twelve month or so… The final thing for me was the Facebook situation where the owner, Colin Goldring, actually voted for me to be sacked… Once that respect’s gone… I feel like (the) time has come for me to move on.”

Subsequently, Mr Goldring has denied taking part in the Facebook vote but the details of his denial are frankly not credible. No wonder Jim left. He leaves a huge hole which is being filled – in the short-term at least – by veterans Club Captain Barry Roche and Kevin Ellison. Given that assistant Manager Ken McKenna and goalkeeping coach Lee Jones went with Jimbo to work at Fylde, journalism graduate Baz would probably have found himself having to take up the role as Jones’ replacement at the very least. Now he’s in the hot seat with Kev, who has been progressing with his Coaching Badges during the last few years at the club. They face a daunting task, particularly as neither of them have any experience of managing a football team at any level. That doesn’t mean that they won’t succeed, though: Jim Bentley himself had only brief Reserve Team managerial experience before he took the job all of eight long years ago after all. So, untested or not, I’m sure all Shrimps’ supporters wish them both the very best of luck.

The rookie duo’s first test arrived in the shape of Leyton Orient, for whom it was only new boss Carl Fletcher’s second game in charge. Orient – recently returned from the National League which threatens to engulf Morecambe – were sixteenth in the League Two table before the game and arrived on the back of three wins, one draw and a single defeat in their last five league fixtures. The Shrimps, on the other hand, had lost four and won just one of their previous five league games. In previous encounters, Morecambe’s record against the Londoners is pretty dire: in four meetings, they have lost three and won just one.

Before the game, Kevin Ellison made it clear that both himself and Barry Roche still wanted to play for Morecambe. Today, though, Baz dropped himself to the substitutes’ bench and Kev was left out of the squad altogether. For the visitors, Conor Wilkinson returned to the bench but both Sam Ling and Myles Judd were unavailable due to injury.

Confounding the dire weather forecast, it was dry and actually quite sunny at times in North Lancashire on Saturday morning.  However, the skies clouded over as the day progressed and it was drizzling heavily by the time the game kicked-off. There was an immaculately-respected one minute’s silence before the game to remember the fallen of two world wars and other conflicts.

But once the match started – in front of a commendably large number of supporters from London’s East Ten – the Shrimps went onto the front foot from the off – and stayed on it. Dean Brill’s head seemed to be still in the dressing room as John O’Sullivan bore down on him in the first minute and he was lucky to get away with a belated clearance. Six minutes were on the clock when Andrew Tutte shot from all of twenty-five yards to see his effort deflected low down to just scrape past Brill’s left-hand post at the cost of a corner. Morecambe forced a number of further corners but the nearest they came to making a break-through from them was when Steven Old headed into the ground after ten minutes or so. Tutte tried his luck again after eighteen minutes and Brill did well to shovel the shot over the bar. Left-Back Luke Conlan suffered altitude sickness after twenty -four minutes when he almost danced his way right through the visitor’s defence only to lose the ball at the crucial moment. Thirty-three minutes had been played when Morecambe came the closest they did all half to breaking the deadlock: a low cross from the left went right across the Leyton goalmouth but nobody was able to put the finishing touch to it: Lewis Allesandra’s belated connection went wide. Another diagonal cross from the Morecambe left also went unconverted with about ten minutes of the first half still to play. So the first period ended scoreless with the Shrimps well on top. Orient had stood-off most of the game and lacked penetration on the rare moments they got into the host’s half. The truth of the matter was that Mark Halstead in the home goal had nothing to do throughout the opening period and Orient didn’t even force a single corner kick. The only shot they had at goal was when James Dayton shot wildly way over the bar after 34 minutes.

This all changed within moments of the second half.  It would seem that words had been said in the Orient Dressing Room because the team in the white strip came out and immediately started to play at a faster tempo whilst compressing the play. Halstead had more to do in the first two minutes of the re-start than he had in the whole of the contest so far. He powerfully punched away corners from left and right and for the first ten minutes, the Shrimps were very much on the back foot. But they could have taken the lead when a complacent Brill allowed a cross which he clearly expected to go into touch to come off Cole Stockton’s back instead to stay in play as the Morecambe forward got behind him: it could have gone anywhere. But with fifty-seven minutes played, the hosts had the next best chance to open the scoring and only two excellent blocks by the Leyton defence kept them out. Things could have changed after an hour when Tutte spoiled a rare half-decent performance with an appalling foul on Craig Clay; late; high and totally unnecessary. He was lucky to escape with just a yellow card in my opinion.  Morecambe were having more of the play again by this time but wasted promising possession at times by continually passing sideways or backwards when attempts on goal could have proved far more productive. 65 minutes had been played when George Marsh sent over what was probably supposed to be a cross from the O’s right: it dipped only just over the Morecambe bar. A minute later, a desperately backpedalling visiting central defender misconnected with a ball coming over his head to set-up Cole Stockton for an instant shot which went just wide of Brill’s right-hand post. A-Jay Leitch-Smith replaced Cole shortly afterwards and his first contribution to the match turned-out to be decisive. As the visiting goalkeeper loudly encouraged his defenders to “Stop the Crosses!” as Morecambe probed down the Orient right, A-Jay collected the ball and slung over a fantastic shot which spun over Brill into his top left-hand corner. It was a fantastic strike from one of the Shrimps’ undoubtedly class acts. From this moment on, Leyton tried to chase the game only to be frequently caught on the break. At times, they looked utterly panic-stricken at the back but they also had opportunities to equalise. After 78 minutes, Halstead produced a tremendous reaction save to keep Dan Happe’s shot from point-blank range out. He also came to his team’s rescue with almost the last kick of the match: diving full-length to his left to push a low shot following a James Brophy cross away for a corner. But at the end of the day, the points were Morecambe’s – and deservedly so.

One Swallow does not make a Summer but this very first win at the Globe Arena this season was well-deserved and came as a result of some intelligent and creative play at times. With Stevenage drawing at fellow-strugglers Scunthorpe, Morecambe remain bottom of the EFL on goal difference alone tonight. It’s too early to talk about the green shoots of recovery but if the Shrimps continue to perform to this standard, they can still expect to be in the EFL next season. Despite the loss, the O’s remained in sixteenth position.

Twenty-odd miles away to the south, Jim Bentley oversaw his new team’s second draw in a row to see AFC Fylde in twentieth position in the National League and thus out of the relegation positions tonight. So everyone associated with Morecambe FC were happy this evening.