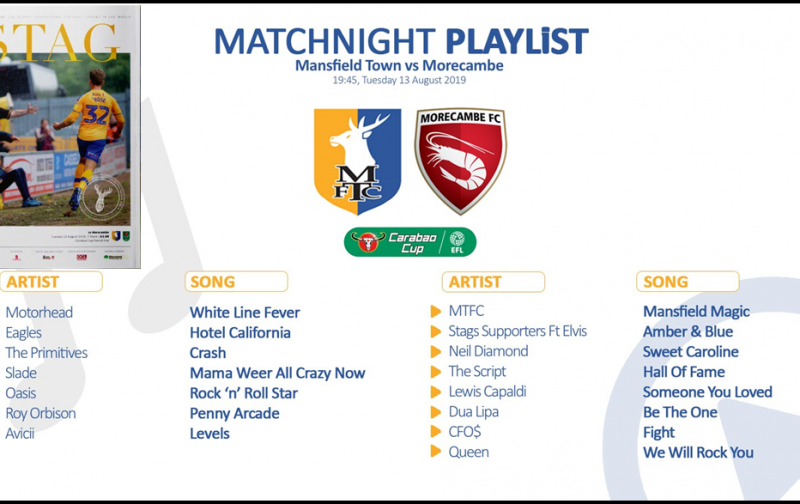 Who needs a match preview? All we need to know about tonight’s clash between Mansfield Town and Morecambe in the First Round of the League Cup is what has happened during the opening two weeks of the new season. On past form, Mansfield will let in two goals without reply and then battle back to equality before having a man sent off for a truly appalling foul. That’s what happened last Saturday at Field Mill, when Matt Preston made himself unavailable for tonight’s game with a needless, stupid and extremely nasty foul on Lewis Allesandra. Even his own Manager said after the match that it `wasn’t good enough’. The previous game saw Jacob Mellis sent off for stamping on a fellow professional: in that case, a Newport County opponent in a contest where over half of the Stags’ line-up were recorded in the Referee’s notebook by the end of the game.

Maybe they need Anger Management lessons. Or perhaps they think they’re so good, they should play with at least one man short for at least part of a game just to give the opposition any chance…

Morecambe Manager Jim Bentley admitted his frustration after Saturday’s League Two clash to see his team let a two-goal lead slip. But he made the point that a draw at a place like Field Mill is a decent result whichever way you look at it. He also lavished praise on Mansfield’s Man-of-the-Match for the second game in a row: Danny Rose (that already makes him Player Of The Season, doesn’t it?…)

Jim’s opposite Number John Dempster said this about the first half hour’s performance from his team (when only the width a post stopped his men being three-nil in arrears):

“I expect fight and determination from minute one. We’ll really be focusing on how we start football matches from this point on because what happened on Saturday is unacceptable”.

His assistant – Lee Glover – went further and suggested before tonight’s game that players who make themselves unavailable due to foul play need to look over their shoulders:

So who was in the team tonight – and how did it contrast with Saturday’s League Two line-up?

For the Stags, Hayden White, Dion Donahue, Alistair Smith and Ryan Sweeney were all promoted from the bench and Andy Cook was added to the starting eleven. There was no room anywhere in the squad for Neal Bishop, Nicky Maynard or Alex MacDonald from the team named just three days ago to face the Shrimps. Danny Rose was relegated to the bench, presumably to save his legs for Town’s next League Two game at Carlisle next Saturday.

Jimbo also shuffled his pack considerably. 19-year-old George Tanner was signed on-loan for the rest of the season from Manchester United just yesterday but he went straight into the starting line-up tonight. He was joined by reserve goalkeeper Mark Halstead, Ritchie Sutton, Shaun Miller, Rhys Oates, Tom Brewitt and Jordan Cranston in the changes to the eleven who lined-up at three o’clock on Saturday.

It was quite sunny in Nottinghamshire as the game kicked-off. To make watching the game even more appealing, the club had offered reduced-price tickets for tonight’s clash: a tenner for all seats and a fiver for concessions. Well done them.

New boy Alistair Smith introduced himself early doors to nippy Shaun Miller and was booked for a sliding challenge as early as the fifth minute.  Was he putting down the first bid to be Mansfield’s Red Card Man Of The Match tonight?

The visitors also had the first half-chance of the game: Hayden White did brilliantly to not only block a goal-bound shot but picked himself up to deflect Rhys Oates’ follow-up effort for a corner. This led to some confusion in the Town defence before Conrad Logan was able to gratefully grab the ball.

Down the other end, it was Captain Sam Lavelle’s turn to make a good block on Andy Cook’s effort after almost a quarter of an hour.

But the script was stuck to after eighteen minutes. C.J. Hamilton did really well to get a foot to a smart pass which would have set Lewis Allesandra free for a run on goal at the expense of a corner with eighteen minutes on the clock. From this, Alessandra eventually sent over a cross which was met by Steven Old with a trade-mark header to give the visitors the lead.

However, Luke Conlan clearly hadn’t read what was written in the stars before the kick-off. Or maybe he was fed-up with the Stags getting all the attention from Referees in recent times. For the first time in his Morecambe career, he was shown a straight red card after twenty-two minutes for an uncharacteristically bad challenge from behind. The Referee was Robert Lewis; the victim was Kellan Gordon.

Three minutes later, Cook came close to reducing the arrears when his effort from Malvind Benning’s low cross hit the Morecambe bar. And as Mansfield’s superior numbers told, the two men combined again with almost half an hour played: this time, Cook headed just wide. The home team were on top at this point and had a number of further half chances. But the Shrimps’ ten men kept them out until half time and Mark Halstead was not forced into significant action at any point.

Even with a man down, the Shrimps went on the offensive at the beginning of the second period. They played some nice, flowing football and forced a couple of corners in the opening five minutes. But the hosts were also playing dangerously on the break and they made things all-square on the night in the fifty-seventh minute. Halstead pulled-off a magnificent save from a Ryan Sweeney corner delivered by Otis Khan but Captain Krystian Pearce managed to head the loose ball home from a difficult angle before the visiting defence could get to him.

Almost straight from kick-off, though, the script was torn-up once again. Hayden White committed a foul; Jordan Cranston took the free-kick and there was that man Old again to head the ball past Logan for the second time on the night. Mansfield’s Manager shuffled his pack with a double substitution after 66 minutes. Included among these changes was the iconic Danny Rose. Perhaps ironically though, it was his fellow substitute Omari Sterling-Jones who made the initial impact. With his first touch of the game, he smashed the ball past Mark Halstead during the seventy-ninth minute. So – guess what? – it was two each with the Stags coming from behind for the third game in a row. So which of their worthies was lining-up to get sent off just to keep-up some sort of symmetry in results so far?

Sadly for Morecambe, nobody was…

The visiting goalkeeper was booked for time-wasting as the ten men tried to hold-out long enough to go to penalties. Jim Bentley also shuffled his pack – a defender for a defender; a forward for a forward – as the minutes slowly ticked away. Rose’s contribution to the game was to receive a yellow card. Mansfield dominated the possession but the visitors still fashioned the occasional chance on the break such as when Miller narrowly missed the target with just six minutes still scheduled to play. Despite four minutes of injury time, however, the game ended all-square with the visitors gamely playing for most of the contest with only ten men.

In the penalty shoot-out which immediately ensued, Morecambe went first.

Miller missed the target completely with his opening effort. Halstead then brilliantly saved Khan’s first effort for the hosts. Cranston then scored for us with a very cool shot. Mansfield then missed. John O’Sullivan then scored again. Mansfield scored again. Lavelle was next. And hit the ball miles over the bar. Rose scored for them straight afterwards. Buxton was next. He scored too. Mansfield Captain Krystian Pearce was next. Halstead got his hands to it but the ball trickled over the line. Alex Kenyon was next in the firing line. Perfect penalty – well done that man. Will Tomlinson then scored for the Stags to restore equality. Tom Brewitt was next and Brewitt never blew it, despite some backchat from the Town keeper aimed at the youngster before and after the kick. Boo! Mansfield then scored again. Steven Old was next. Two goals so far – could he make it three? He could – emphatically. Sweeney took Mansfield’s eighth penalty – and hit it against the crossbar.

In two games against much-fancied Mansfield on their own patch, Morecambe have never been behind. To win any game with only ten men on the pitch for three-quarters of it is an achievement in itself.

This was a tremendous victory at Field Mill tonight. It broke the script written by Mansfield so far.

Morecambe thus live again to play again in the Second Round.