Kev Comes To The Rescue. 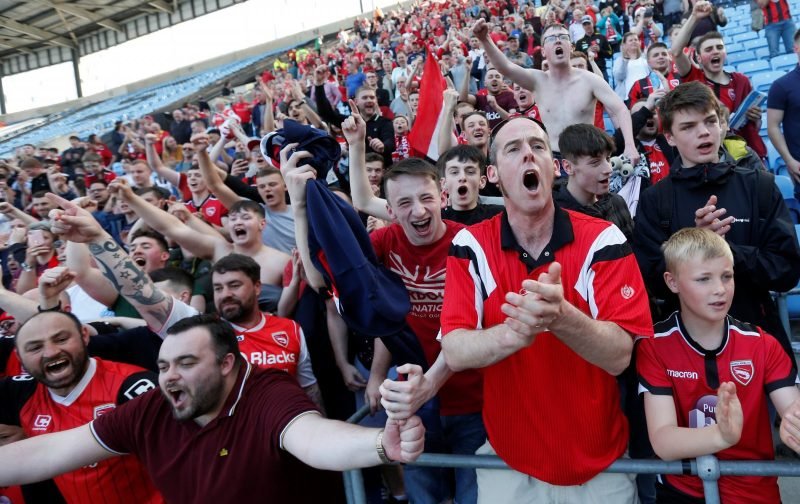 Morecambe visited South Wales today to face a team against whom their record is better than most. In ten previous contests, the Shrimps have lost just twice but won on six occasions. Reflecting their generally disappointing home form since their move to the Globe Arena, the fact remains that the Shrimps lost both these games in Lancashire: they have never been beaten at Rodney Parade and have been victorious in three of their five previous matches at this venue. County’s record this season has been quite patchy – although they were fourth in League Two before the game, they struggled to draw with bottom club Macclesfield at home earlier this month and were hammered by Yeovil in front of their own supporters by six goals to nil during September.

With new signing Florent Cuvelier on the bench in a bid to fill the vacuum caused by injuries to midfield regular Andy Fleming and Andrew Tutte, Jim Bentley would hope that his patched-up team could reverse the trend of two losses on the spin during the last week. For the Exiles, Fraser Franks was unavailable after being sent-off last time out at Crawley, where County lost 4-1. Joss Labadie – re-signed earlier this week after months of injury and rumours he was hoping to go to a bigger club as a free agent – was also unavailable for a side so ravaged by injuries that current League Two Manager of the Month Michael Flynn had to name himself as a substitute at Crawley.

It couldn’t have started worse for the visitors. Right from kick-off, County worked the ball to Robbie Wilmott whose shot was brilliantly saved by Barry Roche. Sadly for him, though, fellow-countryman and former team-mate Padraig Amond was quickest to react and headed the loose ball past him to put the Welsh club one goal to the good. Baz was forced into action again seven minutes later, producing another excellent stop to deny Antoine Semenyo’s header in the far corner just as it seemed that the Exiles were going to double their lead. Gradually, however, the visitors slowly recovered from the shell-shock they had suffered in the opening minute. Returnee from injury Rhys Oates beat Joe Day in the home goal after nineteen minutes with a low shot but Wilmott appeared from nowhere and managed to stop the ball crossing the line. Both keepers were forced into further fairly regular saves before the break but the hosts went back to the Dressing Rooms in the lead whilst the visitors must have rued their poor concentration right at the beginning of the match.

Any hopes that the visitors from Lancashire would launch an early attempt to claw-back the deficit at the beginning of the second half came to nothing. That said, nothing of interest as far as either side was concerned happened until an hour had been played. Then, Jordan Cranston struck a free kick over the Newport bar from quite some distance. Five minutes later, however, County should have extended their lead. Matty Dolan’s free-kick found Semenyo well-placed in the Morecambe penalty area but the loanee from Bristol City completely wasted a golden opportunity by missing the target altogether. As Newport started to apply some concerted pressure and win a succession of corner kicks, substitute Tyler Hornby- Forbes tried his luck with a powerful shot which was deflected just wide of the post. Jim Bentley decided to shuffle his pack after 71 minutes. He took off Cranston and Oates and replaced them with Jason Oswell and Kevin Ellison. Kev was in the right place after 77 minutes when Vadaine Oliver set him up to run into the penalty area before slipping the ball into the corner of the net to restore equality for the team from Lancashire. Almost immediately, Amond would have put Newport back into the lead if it wasn’t for another excellent save from Big Baz. After this, there was little to report other than Kev picking-up another yellow card to add to his first goal of the season and the game finally petered-out into a draw which was somewhat disappointing as a spectacle.

So the visitors kept–up their exceptional record in South Wales. Jim Bentley will be delighted with a point against a team which – despite their failure to win – remain in fourth position in League Two. The single point didn’t prevent the Shrimps falling another place to twenty-first in the table. Poor old Macclesfield already looked doomed even at this stage of the season but who will accompany them back to the obscurity of the National League is anybody’s guess. With Grimsby, Cheltenham and Notts County all losing today and teams like Cambridge and even Crewe hardly setting the world on fire, there’s an awful lot still to play for…