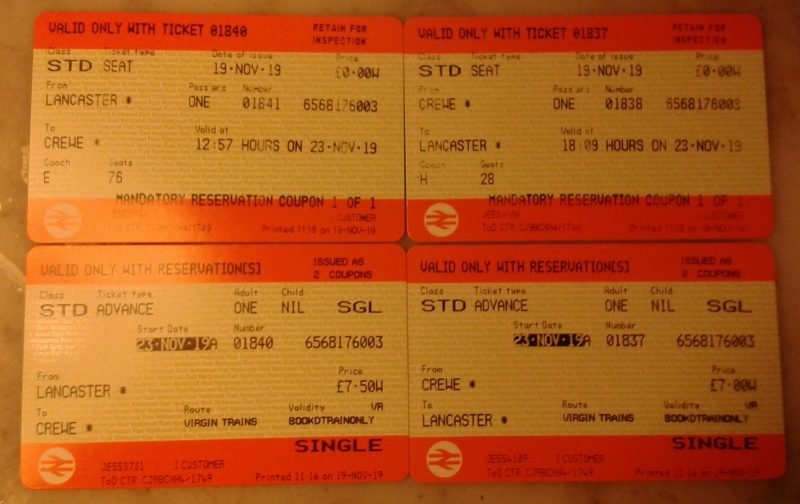 It’s over a year ago since Morecambe, under the leadership of Jim Bentley, visited Gresty Road for their first game of the season. Hopes were high before the game as they always are – new campaign; renewed optimism and all that. But any dreams of future success rapidly turned into a nightmare for Shrimps’ fans as their team was well and truly taken apart by Jimbo’s ex-Morecambe twin central defender Dave Artell’s Crewe, who won six-nil: and it could well have been more. So most Morecambe fans had good reason to think twice before going to Gresty Road again. Some of us – fearing a possible reception committee this time – had more reason than others to think twice about returning to the Cheshire town:

(I jest: I know I would have got a very positive reception at Crewe, had I been able to go. Sadly, the site has removed the comment attached to my article by the Mayor of Crewe. He took it as the gentle mockery it was meant to be but their local BBC radio station very much didn’t…)

Be that as it may, lots of things have changed since last season. Dave Artell’s team are even better than they were then – fourth in the table before the start of play. Jim Bentley is now the manager of AFC Fylde. His replacement, Derek Adams, has been in charge of the team for two matches. They won the first one in the FA Trophy, 3-1 at home against Carlisle United. His first League Two match was at Crawley last Saturday – and the Shrimps commendably came back from a losing position at half time for the second game in a row. This time, they drew one each and thus moved from the relegation position right at the bottom of the EFL in so doing.

As for as other changes at the Globe Arena are concerned, John McMahon was officially announced yesterday as Derek Adams’ Assistant Manager. John once played for Morecambe and has been working with Stuart Drummond’s Academy in recent times. This followed a long coaching stint at Shrewsbury Town as well being temporary Manager at Tranmere Rovers on two occasions. He said of his own appointment:

“I know the players and their capabilities and I think it has been mentioned before that I believe we’ve underachieved in games. I feel my strengths are on the training ground working with people, both players and staff. I’m not frightened or fearful of a challenge with new and different people, I’ve not known the manager for long but I’ve seen lots of positives in his sessions and handling of staff and players.”

There was a promotion for Barry Roche too. He has completed his own voyage to what he once described as `The Dark Side’ by accepting the job as Goalkeeping Coach as well as a squad player.  So the only person who has played a prominent role at the club in recent times whose future under the new regime is not clear is Kevin Ellison. But with all the changes, hopes and dreams were renewed all over again and Morecambe supporters travelled to Cheshire hoping for a new dawn all over again

As far as today’s game was concerned, in previous meetings, Crewe held the whip hand: seven games won out of twelve and just three lost. However, the Railwaymen were thrashed at Northampton – for whom Vadaine Oliver (ploughing a lone furrow up front for Morecambe last year at Crewe) impressed – four goals to one last time they played. This was their second loss in a row; they drew the game before that one and won the previous two. Morecambe, meanwhile, have an identical record in a different sequence from their last five games, having also won two, lost two and drawn one.

The game started with the home team on the front foot as Crewe forced a succession of corners and other set pieces for the first quarter of an hour or so. However, Tom Brewitt missed with a long-range effort after 13 minutes for the visitors and namesake Tom Lowery also missed even more narrowly for the hosts after seventeen minutes. But the Railwaymen took the lead five minutes later when Ryan Wintle whipped-in a lovely cross and unmarked youngster Oliver Finney scored his first goal for the club with a powerful header at the far post. This was poor defending by the visitors but Alex’s second ten minutes was a bit of a fluke: following a corner, the ball found its way to Lowery and his shot took a wild deflection to take it past a helpless Mark Halstead in the Shrimps’ net. Things rapidly went from bad to worse for Morecambe as Captain Sam Lavelle made a reckless late tackle on Harry Pickering and Referee Martin Coy didn’t hesitate to issue him with a straight red card. So, two goals down and with a man missing with just over half an hour on the clock, the Shrimps were right up against it. And it took Crewe just a further six minutes to extend their lead. This time, Charlie Kirk scored a peach of a goal with a curled effort from the edge of the box. Three minutes later, the Railwaymen could have gone even further ahead when Lowery tried his luck again only to see the ball hit the post. And Morecambe fans’ spirits would have sunk even deeper whilst – as further efforts for Crewe were repulsed at panic-stations; the visitors offered virtually nothing of their own going forward. So the half ended with the Shrimps already three in arrears and the certain knowledge not only that they were lucky to be getting away with such a low score but that they were being comprehensively out-played all over the park. The nightmare of last year had well and truly started all over again: the only question was: could it get even worse in the second half?

It could – and it did. Within five minutes of the re-start, Halstead did well to keep Lowery out again after the Crewe forward had been played-in by Owen Dale. The ten men had held out for almost an hour when the Railwaymen went even further ahead with another cracker of a goal, this time from midfielder Ryan Wintle. Captain Perry Ng played the ball into him and he struck it from the edge of the penalty area straight into the top corner of the net.  It was such a stroll in the park for Dave Artell’s men that he took three of them off after an hour, presumably to give them a rest. But still Alexandra pressed. (That’s Alex the club, not Lewis Allesandra the player who, along with another Alex in the shape of Kenyon, were both sacrificed at half time in an unsuccessful to hold back the tide.) Halstead was forced to make further good saves from Finney after 65 minutes and then from substitute James Jones six minutes later. Morecambe got away with it again when a shot from Kirk also hit the post after 81 minutes but in Injury Time, they were beaten yet again when Finney made it a brace with a volley from quite close in.

So for Morecambe, it was just one goal less than they shipped at this venue last time they visited. Their performance was pathetic, end of story – even when they had eleven men on the pitch. Their goal difference – already the worst in League Two – went right into the red zone. Elsewhere, Stevenage held out for a goal-less draw at Walsall to move out of the relegation position on goal difference alone. But Boro have a game in hand and the nightmare scenario – relegation to the National League – seems a very realistic prospect after a performance simply not good enough for the EFL.  The new boss will have to work a minor miracle with the players he has on his books on the strength of this display. In the meantime, Dave Artell and Crewe can realistically dream about a much sunnier future: they deservedly moved into the automatic promotion positions this evening as they ended-up in third position at the end of the game.