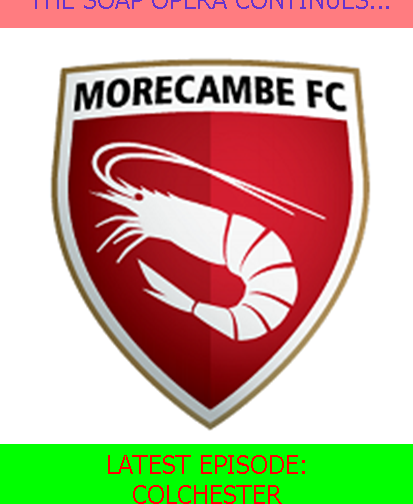 Colchester United were fourth in League Two at the beginning of their clash with Morecambe today in the north of Essex. They had lost their last game – at home – on Boxing Day against Stevenage. If they had won (or even drawn) they would have found themselves in the automatic promotion positions. So they were looking to get back on track against the team from Lancashire today. The only cloud on the U’s collective horizon as far as progress for the club is concerned before the game was the announcement by United’s Chairman, Robbie Cowling, that no funds for transfers in the January Window would be available. He explained that there had been an expectation that the U’s would progress in the various cup competitions they have been involved in but early exits from all of these have cut off this possible future revenue stream. But fair play to Chairman Robbie – at least Colchester United fans know where they stand.

So what has Morecambe Football Club’s New Year Message to their fans been this week? Here it is in full:

“Morecambe Football Club would like to confirm that wages for all staff and players have been authorised.

There was an issue with the payments this morning (28th December 2018) but as soon as the club was made aware it did all it could to rectify the situation as soon as possible.”

That’s right, wages have been `authorised’ – which is not the same thing as `paid’. As far as why the club was not aware of the situation: no explanation. Not a dickie bird. A deafening silence about why the first thing that leaked-out about this latest fiasco came from Morecambe players posting on Twitter. What does this say to them – and the world in general – about the way Morecambe Football Club is being run? How would anybody feel – particularly at Christmastime when the bills are bigger than usual – finding themselves not being paid for work they have undertaken in good faith? You won’t find a single word to explain why this has happened for the second time under the club’s new ownership. Nor will you find a word about the owners of the club – London–based `property developers’ Bond Investments’ Jason Whittingham and Colin Goldring – sudden involvement at an executive level with Rugby Union club Worcester Warriors and what this means for their relationship with the Shrimps.

Any thoughts – on the lines of Robbie Cowling’s – about funds for the Manager in the Transfer window? Plans for establishing regular training facilities for the players to use? Any sort of sustainable scheme for future progress? Free dog biscuits? Your guess is as good as mine. What a complete and utter shambles in the Boardroom – a shambles which has existed virtually ever since the move to the new ground was made eight years ago.

Who needs Eastenders? – the Soap Opera which has been Morecambe FC off the field for the last few seasons shown no signs of either stopping or resolving itself.

And also off the field, The Usual Suspects rant and rave about the Manager and say they want him out. But – just like the Board, they have no Plan A, let alone B or C. They can’t answer simple questions such as `who could possibly do any better?’ or `how can you realistically expect anyone to motivate players to give of their best in a situation where they are not being paid?’ Theirs isn’t a rational response to the situation the smallest club in the EFL faces year-in, year-out: it is an emotional one. Tired and emotional as they say in Parliament a lot of the time judging by some of their barely decipherable ramblings on Facebook and elsewhere. These so-called supporters just throw their toys out of the pram and stamp their little feet, seeming to feel – god knows why – an entitlement to something better.

WHY? ON WHAT BASIS?

And against this appalling background, Jim Bentley simply has to get on with it. His players were poor again in the first half last Tuesday at Tranmere – and, as has become a recent pattern – rallied a bit during the second period but still lost. They are just five points and three places above the Drop Zone. Realistically, this in itself is a tremendous achievement given the dire circumstances the club finds itself in yet again. But it is not sustainable unless or until something dramatically changes in the Boardroom; Jimbo can’t keep making Silk Purses out of Sows’ Ears in a situation where he is not being paid regularly and reliably and nor is anyone else at the club.

The U’s were looking to improve on their record against the Shrimps today: four consecutive draws home and away was followed by the first success for either team in the reverse fixture last October for John McGreal’s men. It was dry but cloudy as the game kicked-off at the Community Stadium. And the fare on the pitch was almost as gloomy as the weather with neither goalkeeper seriously tested and little to write home about during the first half hour or so. Luke Norris’ weak attempt at a shot was easily collected by Morecambe goalkeeper Mark Halstead after three minutes and then Jordan Cranston made a complete hash of a free-kick five minutes later with a wild shot which went high and wide. Frank Nouble then committed an X-rated foul on the Morecambe player but referee John Busby inexplicably let him get away with it: many officials would have dismissed him given the over-the-top nature of the offence but Mr Busby didn’t even book the Colchester player. Jordan clearly was undaunted, though. Once he had received treatment for the foul, he forced home keeper Rene Gilmartin into his first save of the game after 31 minutes with a powerful, accurate shot from some distance. Sadly for the Shrimps, however, Rhys Oates walloped the rebound wildly off-target. United’s best chance so far followed a few minutes later when the errant Nouble crossed towards Sammie Szmodics only for Luke Conlan to do really well to put in a block. So the half petered-out as a goalless draw. Jim Bentley, however, must have been encouraged by his team’s progress so far: with Oates in the team from the start and youngster Carlos Mendes-Gomes making a rare start, this was a much better display than Morecambe put on by the River Mersey earlier in the week.

Having probably just about shaded the first half, the visitors also had the first chance of the second period. Oates got his head to a corner kick after three minutes and should probably have scored but instead drew a save from Gilmartin, who was unable to hold the ball. As the Shrimps’ forward looked set to bury the rebound, that man Nouble appeared again and seemed to push his opponent in the back and thus put him off. But once again, John Busby seemed oblivious to any offence.  A minute later, Cranston again tried his luck with a shot from inside the Colchester penalty area which followed a long run from deep in his own half. At the other end, Halstead collected a header from Brennan Dickenson without too much bother after 52 minutes. The home team were upping the tempo as the game wore on though and Kane Vincent-Young drew an excellent save from Halstead after an hour having done well to keep the ball in play on the U’s left, cutting into the visitors’ penalty area and unleashing a vicious shot which was pushed away for a corner. Although the home team were certainly shading matters, they didn’t have everything their own way. Substitute Kevin Ellison forced a good save from Gilmartin with a low long-range shot after 78 minutes. But Vincent-Young could have won it for the U’s after 84 minutes when only the post stopped his shot after another clever dribble into the Morecambe box. That was more or less the end of the chances however and the game ended as it had started: goal-less.

Elsewhere, Macclesfield and Cambridge lost 2-1 today having both been in winning positions. Cheltenham fought back from two-nil down at home against Forest Green to retrieve a draw which keeps them level with the Shrimps on points but slightly ahead on goal difference. Morecambe remain in twentieth position in League Two but today’s battling display is a credit to men who must worry about is going on as far as their bank balances are concerned and – most of all – is a tribute to the way their Manager continues to motivate them to perform miracles on the pitch. Let’s hope 2019 brings more certainty to the club and everybody associated with it. Have a good one!