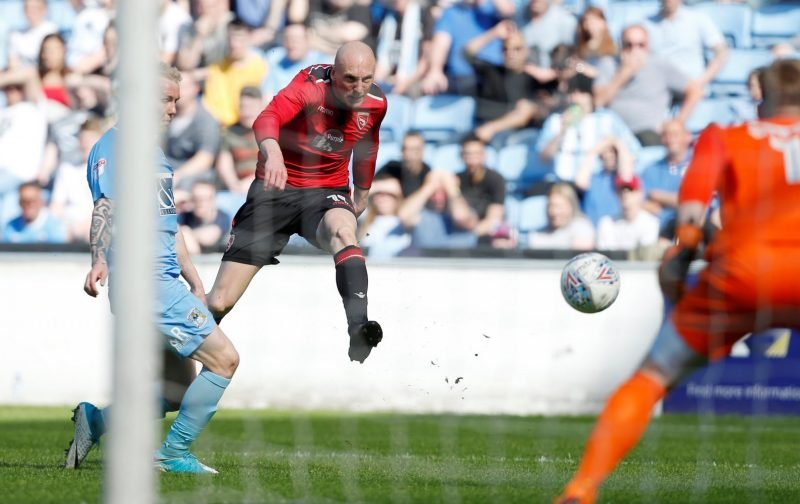 Tangerine Dream is over for Morecambe

Morecambe travelled the short distance south down the Lancashire coat to face Blackpool in the EFL Trophy or whatever it’s called these days at Bloomfield Road tonight. Many clubs and fans alike see this as a two-bit competition but if you’re not in it, you can’t win it as they say: and somebody will. Having said that, this particular somebody will almost certainly not be the Shrimps – they have had a poor record in nearly all cup competitions during recent years but they seem to specialise in doing badly in the various incarnations of this one. Their chances tonight were not helped when perennially injured A-Jay Leitch-Smith broke-down yet again during the warm-up.

It was windy in Blackpool as the game kicked off in front of about two thousand spectators, perhaps ten per cent of them being from Morecambe. Maybe the wind contributed to Chris Mafoumbi’s fumbling of Jordan Cranston’s long-range shot after three minutes. But straight after this, the Tangerines took the lead. Liam Feeney whipped over a corner and Ben Heneghan headed home without too much trouble. Cranston almost brought the tie level after twelve minutes when his excellent free-kick bounced back off a post. As the visitors started to dominate the play, George Tanner came close with a shot from the edge of the box with seventeen minutes played. But Kevin Ellison benefited from a deflection after 22 minutes to make the game all-square on the night. With Tanner and John O’ Sullivan looking lively down the right flank, the Shrimps were enjoying a purple patch which sadly was not repeated at any other stage of the game. Even as the half grew older, the momentum swung back towards the home team – and stayed there for most of the rest of the contest.

Michael Nottingham hit Halstead’s bar near the end of the half and then Callum Guy rattled both posts with another strike right at the death. But Feeney had the final say, scoring with what seemed like a speculative lob with virtually the last move of the game.

There was only one team in it during the second half. Mark Halstead generally did well – such as when he brilliantly saved substitute Sullay Kakai’s shot towards the bottom corner after about seventy minutes. Morecambe huffed and puffed and looked decent going forward at times. Defensively, though, they were a shambles. Blackpool came close to increasing their lead after 50 minutes when Matty Virtue’s deflected shot was well saved but substitute Ollie Turton cleverly played-in Ryan Hardie within a minute to increase the home team’s lead with a low shot. Cole Stockton came close to ending his goal drought this season when he was denied by Mafoumbi with a tremendous stop after almost an hour. Kakai was lively from the moment he came on after 78 minutes and he scored when he swept the rebound from a Nathan Shaw shot which was too hot for Halstead to handle after 89 minutes. It got even worse for the visitors even at this late stage. The Shrimps’ ex-Tangerine goalkeeper allowed a thirty-yard strike from Joe Nuttall to go straight through his hands in injury time at the end of the game to make it five-one to the hosts.

This was a poor display from Jim Bentley’s men. The Manager must be worried about the defensive performance of his men in particular this evening. For Blackpool, this was an easy win in which they probably never got out of about third gear.