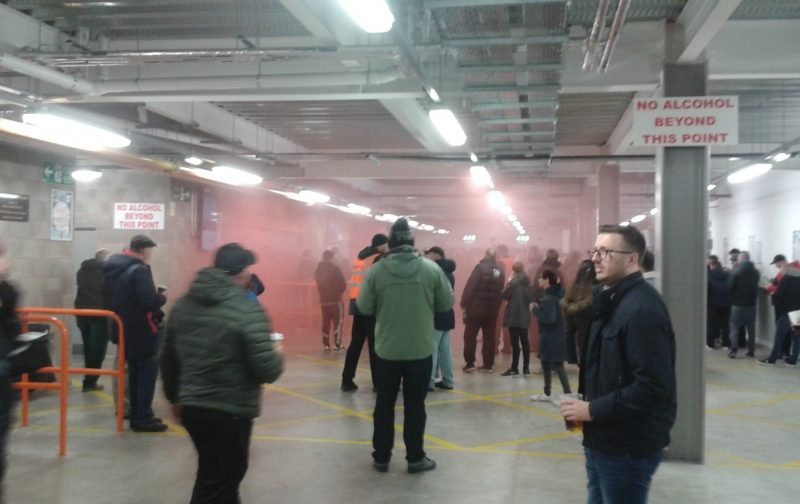 Morecambe Dreams Up In Smoke.

It’s not long since Morecambe visited Bloomfield Road in the EFL Chequers Leasing dot com Trophy – or whatever it’s called – and got tonked. So let’s draw a veil over that and go back in time to Sunday 12th August 2012. Then, in the far more meaningful League Cup, Jim Bentley’s men beat a team which had just been relegated from the Premiership by two goals to one. Lewis Allesandra scored the opening goal and both Barry Roche and Kevin Ellison were also in the starting line-up. Today, Lewis started again but Baz and Kev were watching from the dug-out in their new guises as caretaker managers of the Shrimps for the second time. Their first outing as dual gaffers was last Saturday, when their new charges won for the first time this season at the Globe Arena, where they deservedly beat Leyton Orient by a single goal. Kev came out with a tremendous line subsequently which is well worth repeating:

“Baz and me have a love/hate relationship. That is: he loves me and I hate him!”

Blackpool have been on a long journey since 2012 under the genuinely detested ownership of the Oystons which resulted in equal footing with today’s visitors in League Two at one time. But the Oystons have gone, the fans have returned and Simon Grayson’s team are currently eighth in League One. Last Tuesday, they beat Wolves’ Academy by an injury-time single goal in the same Mickey Mouse competition in which Morecambe have lost to both outfits this season.  There were several changes in today’s Tangerines’ line-up to that game but their team was identical to that in their previous league match, where they won at home against Peterborough United last Saturday by the odd goal in seven.

On paper, there was only going to be one winner of this First Round FA Cup tie. The Shrimps are currently rock-bottom of the EFL and facing a team with a vastly superior squad, budget and support. But they turned the tables on their more illustrious hosts seven years ago. Would it be too much to hope that lightning could strike twice at Bloomfield Road? After all – if we discount the 5-1 win in the FA Trophy earlier this season – the Red team had the Indian Sign over the Tangerine one with two victories to one in previous encounters.

It was dry but literally freezing as well as windy by the side of the Irish Sea in Lancashire when the game kicked-off following a moving rendition of The Last Post to mark Remembrance Sunday tomorrow. Blackpool pressed from the off – and from the off, Morecambe looked shaky and disjointed at the back. Armand Gnanduillet tried his luck for the hosts after just two minutes and missed. Barely a minute later, tricky strike partner Nathan Delfouneso also let fly from a central position but struck the ball straight at Mark Halstead, who gathered it safely. The men in the Tangerine shirts continued to press and Halstead was forced to save again after five minutes from Gnanduillet. The visitors were offering very little at this stage and it was no surprise when Blackpool took the lead after nine minutes with a routine and unchallenged header by Delfouneso. Morecambe passed the ball reasonably well at times but there was little penetration for most of the game. They could have equalised after twenty-four minutes, though, when Captain Sam Lavelle (perhaps their best player today) made space for himself close to Jak Alnwick’s right-hand post and smashed the ball against the underside of the bar with the goalkeeper gawping at it as it bounced back into play. But Blackpool went straight down the other end and the huge Gnanduillet made it look easy as he sent a powerful header from Sullay Kakai’s cross past Halstead to double the hosts’ advantage. Yet again, Morecambe could have reduced the arrears – Cole Stockton turned and shot superbly all in one move but his strike from the Morecambe right smacked against Alnwick’s right-hand post this time and bounced back harmlessly into play. This was with just two minutes left of the first half and it looked like that was going to be the score at the break. But Matty Virtue had other ideas:  when Halstead pushed his initial shot tamely back to him on the right-hand side of his goal, the Blackpool forward needed no second bidding: he fairly walloped it home. So it looked like Morecambe were going to return to the Dressing Rooms on the back of a bit of a thrashing. But Stockton reduced the arrears in injury time as Halstead’s opposite number aped his own mistake and failed to deal with an initial shot from Tom Brewitt – Cole made no mistake from the rebound.

I thought that the next goal would be critical to the outcome of the match. If the visitors managed to get it, maybe we would have a proper game on our hands. If the home team scored it, that would be it. The game deteriorated into a bit of a damp squib though. Blackpool seemed to be happy with what they had; the visitors huffed and puffed at times but never seriously looked like getting back into the game. But at least they forced a couple of corners – something they didn’t manage even once during the first period. Both teams had half-chances but the better of them fell to the Tangerines and it was no surprise when they went even further ahead after 84 minutes when Kakai steered the ball faultlessly past Halstead to put the icing on a routine win for the League One club.

So new Morecambe Manager Derek Adams – who was watching from the stands – will realise what a job of work needs to be done once he takes over team matters next Monday. Blackpool barely got out of second gear today yet beat the team in the red strip easily – far too easily. From front to back, the Shrimps looked inferior man for man. Perhaps most galling of all was the comparison between former Centre Half Ryan Edwards and the current holder of that position, Steven Old: there simply wasn’t any with Edwards looking a class apart. Mark Halstead – unusually – had a very poor game against his previous employers; Tutte turned-in his usual weak display; Jordan Cranston offered nothing when he came on – the list is endless. Another person to be singled out for criticism today was the referee, Ross Joyce. He had a shocker of a game. He was repeatedly conned by diving Blackpool players throughout the match and his booking of John O’Sullivan for diving in the first half was a travesty.  You could see he simply guessed potential off-sides from way behind the play at times and his decision to award a dropped ball in the Tangerines’ favour during the first half (when he had got in the way of the play and the ball had hit him) is something I have never previously seen before at a football match. As with many of his other decisions, this one was literally unfathomable. On this showing, this man should not be officiating in senior football at all: he was a disgrace.