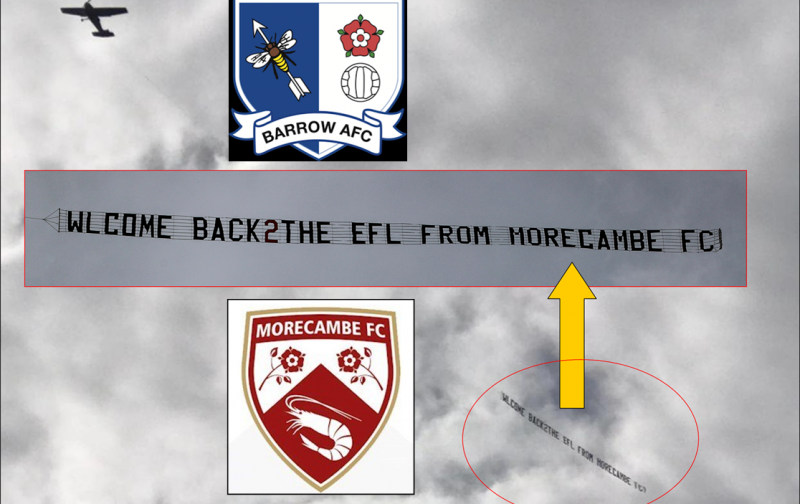 An Ill Wind Blows Barrow No Good At All…

Things have not gone to plan since Barrow returned to the Football League for the first time in almost half a century at the beginning of this season. The Bluebirds lost their talismanic Manager – Ian Evatt – to Bolton Wanderers before a ball was kicked and his replacement – David Dunn – only lasted until December, when he was shown the door. New boss Michael Jolley has not improved things greatly: the ex- Grimsby Manager has seen his new charges pick up only seven of twenty-one available points since he was appointed last Xmas; most of them immediately after he first arrived. Barrow were in the highest of the relegation positions at the bottom of League Two prior to the game today. They have lost three games in a row – including a defeat at Salford last Tuesday – and have won only one of their last five EFL outings. The one hope they have of retaining their new status is that they have two games in hands over Southend and three over Stevenage, who are two and nine points respectively above them in the table.

Barrow have only met Morecambe in an EFL match once before. This was in December last year when they lost by the only goal of the game at the Mazuma Stadium. The contest was decided in the first half when Skipper Sam Hird was very harshly sent off. Today, though, the Bluebirds’ line-up was almost unrecognisable from the one which faced the Shrimps last year. Since the beginning of January alone, Mr Jolley has signed ex-Morecambe player Jamie Devitt from Blackpool (where he was regularly out on-loan) and Ollie Banks from Tranmere on permanent deals. He has also attracted experienced Burton Albion defender Neal Eardley; striker Dan Bramall from Barnsley; defender Tom Davies from Bristol Rovers; fellow-defender Bobby Thomas plus his midfield colleague Mace Goodridge from Burnley on loan deals until the end of the season. That’s seven players – virtually a full team. Ok pedants: 0.6363 recurring percent of one but pretty significant nevertheless. On this side of Morecambe Bay, we can only look on in envy although I am going to avoid the use of the term `little old Morecambe’ even more assiduously than usual. Why? Because the club put out a statement yesterday

which boldly sets-out the intention of the Board “To be a competitive and sustainable League One club by 2024”.

More power to their collective elbows. I, for one, will do anything I can to help to achieve this.

Morecambe went into the game with no fears about relegation, for a welcome change in recent years. They were, however, looking for an improvement in their recent form. They lost tamely from a winning position against a poor Bradford side in Yorkshire last Tuesday and have drawn both of their previous two League Two games, having lost the one before that as well. It is now five games ago since Derek Adams’ team has actually taken all three points and the Manager and fans alike would be hoping for a change in recent fortunes today at Holker Street. Echoing what his boss said after the game, Skipper Sam Lavelle had this to say about the feeble display against Bradford:

“It was a game where we feel as though we had the better chances. I think a point would have been fair overall but it’s another game that’s passed us by. We’ve missed a few chances and been punished for it. We have got to be a bit more ruthless. As a team we have to be better in front of goal, because although it’s a cliché, goals change games.”

For the hosts, all seven of their new signings were in the line-up and four of them in the starting eleven – two of whom – Devitt and Patrick Brough – lined-up against a former employer. Morecambe, meanwhile, were able to select Yann Songo’o, who has until the 24th of this month to defend an FA charge of using homophobic language against a Tranmere player last month.

The weather forecast for the Morecambe Bay area had been appalling and the Lower Ormsgill Reservoir adjacent to Holker Street’s stadium was full to the brim. The ground was wet underfoot, the pitch bare of grass in many large patches and grey clouds obscured the views across the Lakeland Hills in the distance. But there was no rain in evidence as the players warmed-up and the game went ahead.

What happened over the next forty-six minutes was – quite simply – the most one-sided half of football I have seen so far this season. Barrow offered nothing – the biggest difficulty Kyle Letheren experienced during the entire period was to try and stop the ball rolling away when he took set-pieces due to the strong wind whipping from the Irish Sea down the pitch towards him. At the other end, Joel Dixon had a lot more to worry about. After seven minutes, he made a routine save from a Sam Lavelle header following a corner. A minute later as the Bluebirds cheaply gave the ball away, Aaron Wildig chanced his arm from the Shrimps’ right and only just missed the far post with a low shot. After twenty minutes, Cole Stockton took a free-kick from about thirty yards out and only just missed to Dixon’s left. Carlos was fouled on the edge of the Barrow penalty area after twenty minutes and took the resulting free-kick himself. The shot hit Dixon’s left post although the goalkeeper may have got a glove on it; the ball rebounded nicely for Cole but he allowed Dixon to shovel his shot away for a corner when he should have buried it. When the resulting cross came over from the corner spot, Morecambe’s Number Nine then contrived to head the ball wide of the target. However, the big centre forward made up for his lapses after twenty-three minutes. He received the ball on the Morecambe right and made progress before slinging over a peach of a cross with the outside of his boot which an unmarked Wildig gleefully headed home at the far post to put the visitors ahead. Three minutes later, Barrow’s hearts were in their mouths again as Dixon only just got to a long ball first and managed to clear it. After twenty-seven minutes, Carlos cleverly pinched the ball and set-up Cole for another run on goal down the centre of the pitch. He delayed too long before taking a shot though and Joel Dixon again came to the Bluebirds’ rescue with a brave save at his feet. And so it went on. I personally found it hard to believe that this was the same club who played so well at Morecambe last year with only ten men on the pitch most of the time. Scott Quigley – who was a handful throughout the match then – was anonymous. Jamie Devitt made no impression on the game whatsoever. Barrow played with no confidence, no obvious plan and with precious little basic skill. They constantly gave the ball away, were caught in possession and squandered their set-pieces by regularly over-hitting the ball. Barrow went in looking already beaten and with two of their players’ names already in Referee Thomas Bramall’s notebook – James Jones’ for a particularly nasty challenge on Carlos after the whistle had blown. The referee had also given Tom Davies a long talking-to presumably for back-chat and you wondered how Michael Jolley’s team’s discipline would hold-up during the second half.

Were they any better during the ensuing period? The jury’s out. They undeniably had more of the play but I fear that this had more to do with Morecambe’s lack of ambition and their recent tendency to try and defend what they have than any dramatic improvement in Barrow’s overall play. Having said that, Josh Kay – their best player by far today in my opinion – actually made a strike on goal which Kyle Letheren saved easily enough within a minute of the restart. But the visitors produced the best piece of play so far after 54 minutes which went to nothing after good interplay between their forwards when John O’Sullivan eventually over-hit the ball to spoil the move. A minute later, sheer strength and determination saw Stockton win a 50/50 challenge which resulted in him forcing the home goalkeeper into another fine save. As the hosts continued to struggle to clear their lines, Carlos again won the ball after 57 minutes and fed Wildig. But Aaron’s shot was poor and Dixon saved it easily. A minute later, the visiting team had a let-off though when Wildig carelessly gave the ball away and Kay hit Letheren’s left-hand post with a tremendous drive from all of thirty yards. The Shrimps had the next chance as Mendes-Gomes and Sully combined well only for Carlos to force a tremendous stop from Dixon after an hour. Sixty-one minutes were on the clock when Yann Songo’o committed a poor challenge on Kay for which the Shrimps’ man was rightly booked. Barrow’s fortunes so far were summed-up when – from the resultant free-kick – the ball was booted straight into touch. But Morecambe didn’t heed the let-off and continued to fail to press. Sixty-four minutes had been played when Kay was far too quick for the Shrimps’ defence and managed to get behind it on his left flank and pull the ball back right across goal. Liam Gibson, standing beyond the far post, attempted to hoof the ball away. It went straight to Quigley and the big centre forward immediately dispatched it past Letheren to level things up.

The score barely reflected what had happened up to that point. But if you don’t take your chances…

Right from kick-off, however, Morecambe re-took the lead. They attacked down their left and worked the ball to Cole Stockton who took it towards the right across the home penalty area, dummied to shoot and laid off another perfect pass which Kelvin Mellor – galloping-in from the right wing – fairly walloped past Dixon to restore the visitors’ advantage. And that was basically that.

From Morecambe’s point of view, the only disappointing thing about today’s performance is that they could – and should – have won far more easily than they actually did. They should have been out of sight before Barrow equalised. But a win is a win and the three points and latest double pushed Derek Adams’ team back into fourth position in League Two.

As for Barrow, I would fear for them if I was a Bluebirds fan. They didn’t play as a unit at any time today and looked woefully short of confidence. But for their goalkeeper, they would have been far more soundly beaten. Cambridge graduate Michael Jolley was ultimately unsuccessful at Grimsby which poses the question why Barrow’s bosses saw him as the man to lead them out of the mire they find themselves in at the moment. Worse news arrived after the game from Stevenage, where the home team managed to take a point against Walsall to put themselves ten points clear of the Bluebirds. It seems to me that the only hope Barrow have of avoiding an immediate return to the non-league wilderness is that Southend might be even worse than they are. The Shrimpers lost at home as well today; this time against Bolton. They are therefore just one point higher in League Two than Barrow – but they have played two games more. So fingers crossed for our nearest geographical neighbours…